In the previous blog we saw Pico and Tera making wedding plans in Nunspeet. However, that is not as simple as it seems.

First, there is the problem of incapacity to act. Under the Civil Code, introduced in 1838, women were legally “incapacitated” from the moment they married. This meant that a woman could not buy clothes or equipment, travel, take out insurance or open a bank account without her husband’s permission. A married woman was not supposed to work outside the home; on the day of her wedding she was fired.. Her role was that of a housewife and mother, but she had no say in the education of her children, the parental power belonged to the man. She could only withdraw money with her husband’s authorization. Hence the term “household money”, which enabled women to at least do their daily shopping independently. Most women had to justify that household money to their husbands in a housekeeping ledger. By Royal Decree of 1924, all married women under the age of forty-five who were in government service were dismissed. Women over the age of forty-five who were already employed were unlikely to become pregnant and were therefore exempted from the rule, provided they had permission from their husbands and bosses. Married women’s legal incapacity was lifted in 1956. The labor ban on married women was also officially abolished in 1956. In practice, however, women were still fired upon marriage until the 1970s.

Tera therefore writes to her boss; de Beaufort. He has to approve that she may remain in the service of the museum “for the time being”, even though she is married. Tera is forty-six years old in 1945 and may, with permission, remain in service. Perhaps that was also a reason for her not to get married earlier. After all, her work had always been very important to her. De Beaufort absolutely does not want to miss Tera and immediately agrees to Tera’s stay. However, the municipal payroll administration is not really geared to married women: … I called the town hall about my job. I just need to give notice that I’m married, and then they’ll make everything right. I am in wage tax scale II, but – O inconsistency! – the unmarried deduction remains. Nor will you get a widower’s pension if I die.

In Amsterdam, Tera sets everything in motion. To do this, she must first get a birth certificate from Pico and then go to the Civil Registry with all kinds of papers: Yesterday your birth certificate finally came from Eindhoven. Those folks there aren’t fast! With that, and my birth certificate and your declaration of marriage and proof of residence in Amsterdam from me, I went to the registry office today. They have taken in all those papers and handed me a note, with which I can register on Tuesday 24 July. Then you are a groom without noticing it. In connection with the announcement in Breda, I was advised to set the wedding date three weeks later. That will be August 15 at the earliest. We get married 2nd class, i.e. alone, but not in the most expensive category. We can set the wedding date as soon as you are back in Amsterdam, provided we announce it only one week in advance at the city hall.

You must apply for a settlement permit for Amsterdam in Alkmaar at the office for refugee care and evacuation St. Laurensstraat 3. In doing so, you must show that you are coming to live with your wife, so you do not need a new home

On July 24, she goes to register at the registry office: Ce n’est que le premier pas qui coute… It has come over you so quietly like a thief in the night and now you are a bridegroom. You did miss something: what a tramps, and weird looking wantons and hookers, some with figures of 6 months or more. You now have to fill in that you do not belong to the comrades. And above all, if you come here bring your food stamps \.

The comrades in this regard are the NSB (Dutch National Socialist Party), they both must indicate that they have not been members of this club. The solicitor is called for the prenuptial agreement: If you still have time in Breda, you could perhaps check whether your wedding announcement was indeed made on Saturday 28 July. And immediately ask when they will send the answer to Amsterdam. We can then make the choice of the wedding date depend on this. 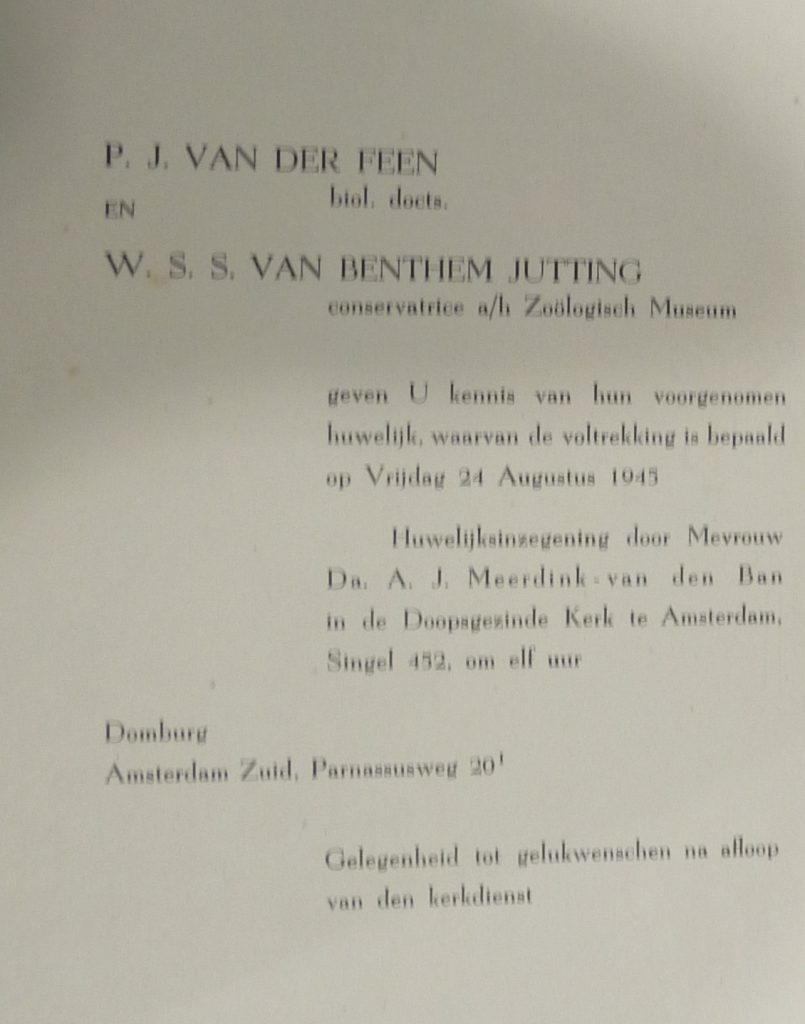 I called Portielje (printing company) to see if they can print any wedding announcements. That will still work, provided it is not too large a quantum. I mentioned 500 pieces, but they thought that was a lot. It can wait until you are here.

I have not yet received any message from the solicitor; I asked him to indicate which documents he needed on my part for the prenuptial agreement. If it takes too long now, I’ll call him, because you can make long-distance calls to Haarlem again. Also the tram and train connection has improved a lot, which is important for our visit to Heemstede and Haarlem.

Witnesses are being sought; Hendrik Engel and Piet Meertens, who turns a color when Tera asks him. A Mennonite pastor is being sought: Furthermore, Mrs. Meerdink called me to say that  the consistory has approved of her blessing our marriage and that she is very pleased to do it. As soon as we know the date, we have to arrange this further with the sacristy. She will be delighted if we visit her at her home sometime, to get acquainted, as soon as you are back in Amsterdam. When this call came, Piet was with me (he had eaten here). And when he heard what it was about, he spontaneously said: oh but that Mrs. M is excellent, I once heard her in Baarn, you chose well. I just hope that the whole show goes well and that you are pleased with it too. In honor of that church performance it might be a good idea to bring a top hat? I leave it up to you. It is not strictly necessary.

The two households have to be blended together and space is made in the cupboards for Pico’s things. Tera is concerned about the trousseau: I own 12 large spoons, 12 large forks, 12 dessert spoons, and 12 dessert forks. Of course it’s nice to have more, but it’s not necessary at all. So if you want to sell some of your silverware, you can do it without hesitation. Whether it is wise as an investment, I still have to inquire. I only own a few special spoons and forks, but I do have a soup spoon, asparagus tongs, 3 sauce spoons, strawberry scoop, sugar caster, egg spoon, rice spoon, fish scoop and a few small spoons for jam, brown sugar, syrupand the like. So no meat forks, vegetable spoon(s) and more of that special stuff, not even fish place settings.

Tera sources ingredients for a wedding luncheon. Cousin Kitty trades a piece of cloth for two bottles of wine and sister-in-law Ans is helpful in finding cigarettes. What is striking about the entire organization is that Tera arranges everything and Pico willingly lets it happen.

Did I already write to you that the professors, senior assistants and curators of our university, of Leiden and of Utrecht received a lot of food from the joint Belgian universities? Sardines, matches, salt, peas, beans, macaroni and lard. The sardines and macaroni are especially welcome. The first can serve nicely for our wedding luncheon!

The couple marries on 24 August 1945 in Amsterdam, in the Mennonite Church. (see picture opposite) The ecclesiastical ceremony is concluded with the collective singing of a couplet of the national anthem “Wilhelmus” as a thank you for the liberation three months earlier. 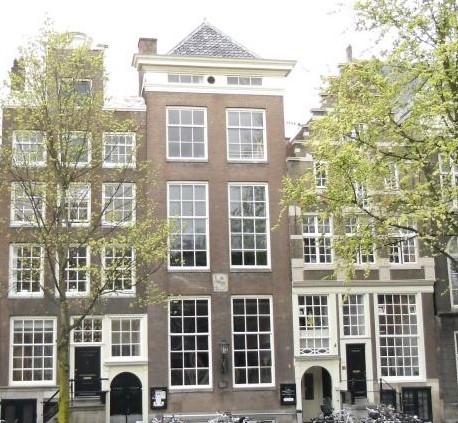 In the next blog we will celebrate the honeymoon.