This first blog is about the run-up to Tera’s life, her parents, her background.

Wouter was born in Middelburg in 1851 as the seventh child of the bookseller Christiaan van Benthem Jutting. His father had inherited the bookshop from “Uncle” Salomon van Benthem, who had taken the young Christiaan under his wing. Christiaan was allowed to go to the Latin school and uncle Salomon ensured that in 1829 Christiaan changed his name, by royal decree, from Jutting to van Benthem Jutting. The van Benthem Jutting family is a prominent Zeeland family. In his early years Christiaan made important friends among the notables of the city, the son of the lawyer, the notary, the doctor. Christiaan, who married Maria Woutersen in 1837, had ten children. The eldest son, who is twelve years older than Wouter, takes over the bookshop, the second son, Leendert, marries the daughter of an ironmonger.

Wouter is going to study law in Leiden. He enrolls in October 1870. In 1872 he becomes engaged to Suze Proos, a girl he knows from Middelburg. On April 11, 1872, Jacob Mees  writes in his diary: In the evening Jutting returns, fully recovered from typhus and, moreover, just engaged. So very happy. However, a commitment that, like his, must last at least 4 years, would be less appealing to me. He is engaged with a girl whom he has already courted at children’s balls, I think this is a very nice idea. We picked him up with music (a harmonica), and in the side room of the pub he was given a bridal pipe.

But Wouter waits four years, and in August 1876 they get married in Middelburg, and then immediately take the boat to the Dutch Indies on their honeymoon, where Wouter can get a position at the court of appeal. Later, in a letter to his daughter, he looks back on that arrival in the far East Indies: What a difference, when I think of my arrival with Suze, after a journey of 48 days in Batavia on December 28, 1876, in the evening in a heavy west monsoon shower, while nobody picked us up, the hotels were full and we finally ended up in the dilapidated Marinehotel on Molenvliet, corner Petadjo.  (Brieven 15 januari 1930)

They are certainly happy in the Indies and Wouter will always remember that first time with pleasure and melancholy. He writes in 1930: I enjoyed the descriptions, because I also experienced all this when I came to the Indies as a young man 53 years ago. I still remember staying with Ismangun on Pegangsaan, walking in the kampong one morning, found a durian on the road, and I was going to carry it home, but fell on the way and fell on the spines of the bark of the durian so I was wounded and came home quite bloodied, much to the amusement of Mrs. Ismangun and Suze. How do you like the taste of the durian? I’ve never been able to get over the stinky smell and that’s probably why I never found them appetizing. (Brieven 18 maart 1930)

However, a few months later disaster strikes and suddenly his Suze, the girl he has been in love with since childhood, dies. She contracted typhoid during her first pregnancy. He is taken care of by friends in Rembang: “When I suddenly lost Suze on May 30, 1877 in Rembang, she and her husband immediately lovingly accepted me as a roommate, so that I found the strength, only in the Indies and so far removed from friend and family, to bear that pain. We lived together pleasantly for almost 20 months, until I was transferred to Batavia. Since then we have always shared each other’s joys and sorrows; (Brieven 14 april 1931) 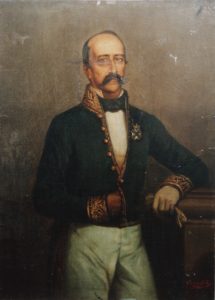 Wouter picks himself  up again and in March 1883 he marries Sophie Bosch. Sophie born in 1864 is 13 years younger than Wouter. She comes from a prominent Indische family, she was born in Kediri on East Java and her father (himself born in Maastricht) was a resident of Djokja,  a Javanese province (now Yokjakarta), she is called Noes, unclear why.

Wouter works as an inspector of the prison system, he travels the different provinces and visits prisons and construction projects of the Dutch government, his task is, among other things, to provide forced laborers to carry out the work.

Years later, in letters to his daughter, Wouter reminisces about his Dutch Indian days: “I also made the trip to the Poentjak several times, on my way to Sindanglaia; it is, I believe, the highest point over which the road that has been built under G.G. Doendels in the longitudinal axis of Java passes. For the sake of car transport, the road has been changed there because it was too steep. In my time one needed a horse for the ascent with a carriage and an extra horse with an ordinary cart, while in order to stop the vehicle on the descent one yoked a horse behind the cart and drove in zigzags. Telaga Saal I do not know; well, however, I have often seen Telaga Warna from Sindanglaia, but, as I remember, it was just very colorful because of the exposure of the sun, that is why it is named  “Warna”, which I believe is the Sundanese word for colour.” (Brieven 29 april 1930)

On February 11, 1888, Wouter and Noes had their first child, Marius. Sometime between 1888 and 1894, Wouter and his family go on a long leave of absence to the Netherlands. All Dutchmen in government service in the Dutch East Indies were entitled once every few years to a large leave of seven or eight months to return to Holland and visit relatives. 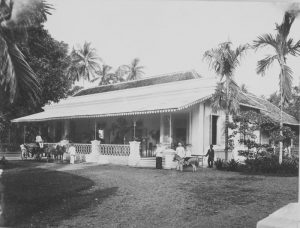 Returning to Batavia, Wouter rents a house in Weltevreden, the Dutch chic neighborhood of Batavia. There is a photo of Wouter with Noes, and little Marius. Marius is sitting on a donkey, Wouter is in tropical costume and Noes in classic Sarong Kebaja, the neat dress for women in the Dutch Indies.

In 1897, Wouter became a judge at the Supreme Court in Batavia, he was then forty-six years old and had acquired a prominent position in Dutch East Indies society. Once a year they go to the races in Buitenzorg, and they make regular trips.

“So you have also been to Gadok once, or perhaps again, where people often spent a weekend in my time in Batavia, but whose hotel was already beginning to languish so that it probably no longer exists. It was then even somewhat of a health establishment with a doctor who probably received a government subsidy. Does the health establishment at the foot of the Gedeh still exist in Sindanglaja? I also have pleasant memories of that, I still have a photo of it.” (Brieven 6 mei 1930)

About Marius, Wouter writes to a nephew in the Netherlands:

If you could come here while we are still in Batavia, Marius will be able to show you around, he is getting that big. Tomorrow he will have his first dance lesson and soon he will also be taking up gymnastics. Who knows whether or not he will also grow into a sailor, now his hobby in ships consists only in that he likes to let them sail in the bathtub. He has two nice little boats, one small and one large, which it is time for you to come and fix them up, for they have a lot to suffer in his hands. He also enjoys a picture book entitled “heroes without swords”, in which all kinds of heroic facts are described in shipwrecks.

Marius has been under the weather for a while, probably due to growth; now he is going back to school, but it is not yet as before, so that he does not stay until the end of school time, which is here from seven thirty to one o’clock. When we speak of you, we notice from time to time that Marius has not completely forgotten you.

After a number of miscarriages, Wouter and Noes at last do get another child, a daughter named  Tera or Teertje (little Tera)  on 6 February 1899. But more on that next time.

1 thought on “For starters”