In Haarlem Marius makes renewed acquaintance with “the girls Hoog” daughters of a vicar from Nijmegen, from the municipality where father Wouter was an elder. Marius does not finish his studies, why not is unclear. However, years later, according to Marius’ daughter, there was already talk in Leiden about Marius’ homosexual contacts and girls were apparently warned about Marius. During the First World War there is talk of sending Marius back to the Indies because he might settle in better there, but that does not happen, partly due to the death of his mother. In 1916 he married Anna (Ans) Hoog. Marius gets a job at a printer’s annex bookstore and in 1918 their first child, Wouter, is born, followed two years later by Wilhelmina (Mientje) and in 1924 Chris is born.

Tera is just nineteen when she becomes Aunt, and that being Aunt suits her very well. She likes to play with her niece and nephews and the children love her. Years later, Mientje will remember that, unlike adults at that time, Aunt Tera would just sit on the floor with the children, play games and pull funny faces. Also in their later life, Tera will always advise and assist her niece and nephews.

Marius starts his own bookshop with mainly technical books. His family lives above the bookstore, but the whole thing is not a success. Marius has no talent for business and in 1927 the business goes bankrupt and the family has to move. The marriage with Ans is bad, they don’t like each other and then there is also his homosexuality, which is not accepted at all. Marius is also in poor health. His wife’s family interferes with the family. His father is also concerned. Marius gets a job in Amsterdam, but that too is unsuccessful. In the end it is decided that Marius will leave for the Indies to build a new life for himself and possibly for his family. He leaves in September 1928. His father and his two oldest children accompany him to the train in The Hague. The van Benthem Jutting family is entirely on “poor” Ans’ hand and the blame for the bankruptcy and the failed marriage is placed entirely with Marius: it will be a hard time for you Ans (…) You can start a new life, with a clean slate, but how, that will be the big question. Never let Marius get into business again. He lacks the most basic understanding of it. We already had to work hard, but in this day and age much more work needs to be done, and I don’t believe Marius is capable of hard work. And as for the children, children who have had a difficult childhood usually become good people. All this luxury nowadays is certainly not a blessing for the youth. Writes a cousin van Benthem Jutting who runs the bookshop in Middelburg with her brother. Marius’s wife starts working as a teacher at the Kennemer Lyceum. Every week Marius writes home and to his father.

Tera takes her final MMS exam in 1916. At school, the lessons “Natural History” also enjoyed her warm interest. Today it is called biology. At the end of the nineteenth century there was a renewed interest in biology and the “knowledge of nature”. The two schoolmasters Eli Heimans and Jac. P. Thijsse published a monthly magazine “De Levende Natuur” (Living Nature) in which they stimulated the often young readers to observe and study nature in the field. The booklets that Heimans and Thijsse published, such as “Of butterflies, flowers and birds” and “In sloot en plas” were also very popular with Tera and her peers. In the 1930s, Tera saved the pictures for Thijsse’s Verkade Albums.

In 1916 she became a member of the Haarlem section of the Dutch Natural History Association. This department is led by Wicher van der Sleen  and is very active in organizing lectures and excursions. Dr. Wicher van der Sleen (1886-1967) is more than ten years older than Tera. Wicher is a chemist and teaches chemistry at the MMS. He is also interested in archaeology, geology, fauna and travel. He writes travel books on various subjects. Tera works in his lab and goes out into the dunes with him and others. She also spends a lot of time with his fiancée Toos. Jacob Heimans  (1889-1978) is also a member of the association. Jacob is an assistant to the botanist Hugo de Vries ( (1848-1935) at the University of Amsterdam. Jacob’s father was the conservationist Eli Heimans. Tera gets on very well with both me 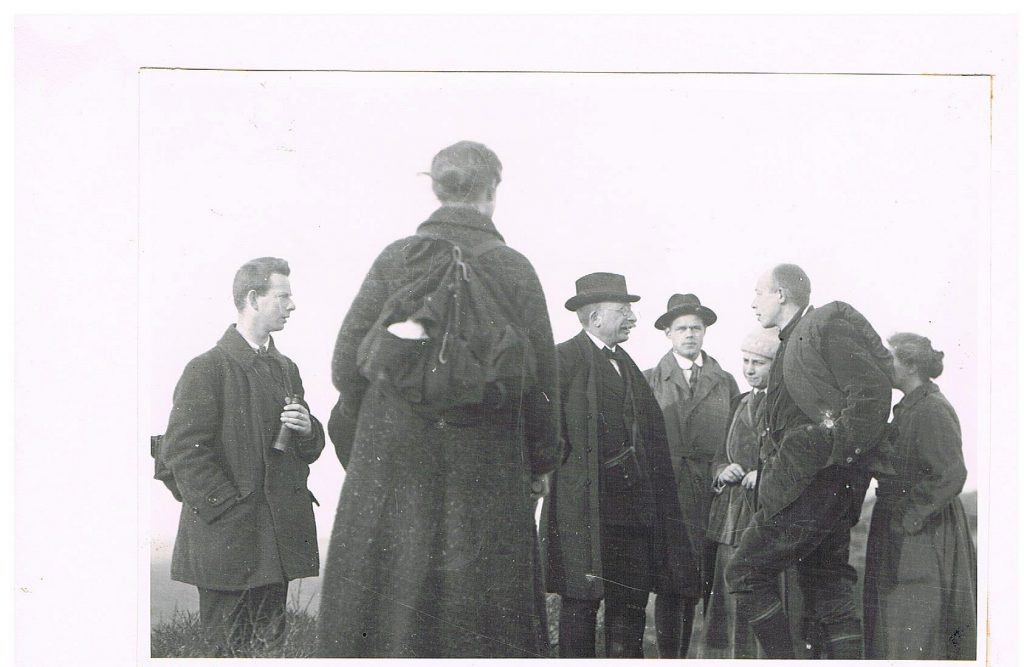 In the photo members of the Natural History Association. The man with mustache and hat is Thijsse. Opposite of Thijsse you see Wicher van der Sleen with his fiancée half behind him. The young woman with the hat is Tera. On the far left is Jan Verwey (we will meet him later).

Tera wants to study biology in Amsterdam after her graduation, but her father doesn’t care for that, although she can take the entrance exam. Biologist is not a profession for women, he believes, and moreover, in his opinion, there is no work to be found as a biologist. In the circles in which Tera grew up, it was quite common for girls to go abroad for a year to Switzerland, Belgium, or Germany to be prepared there for another year or two for life as a lady. However, this was not possible in 1916 due to the First World War. So what to do?

Teacher is an honorable profession for girls, of course until they get married, her sister-in-law Ans also has a teaching certificate. That is why father decides that Tera goes to the study for a Teaching certificate in Haarlem. This training college was founded by the Maatschappij Tot Nut van ‘t Algemeen. When it was founded in 1870, the “Nut”, as it was called, advocated the arrival of women in the classroom because: only women are able to develop the youthful mind and spirit. Moreover, it was considered that the teachers, though eminently suited to prepare young men for higher education or social life, yet lack the finer tact of women to give their instruction in a pleasing and suitable form and in a manner which thereby the feminine mind and heart are both developed and guided according to her peculiar disposition.

The training college had a solid program, in addition to education in all modern languages, attention was paid to physics, geography, history, singing and crafts. Pedagogy was also taught in the subject “pedagogy and education”. There was a boarding school at the school, but as a student from Haarlem Tera will most likely have followed education as an “external”. The training lasts four years.

How Tera manages to get her teaching certificate in only two years is a mystery. From 1918 unwards she keeps a diary. First she describes what she sees, the snowdrops that start to bloom, the tits that build nests. She looks around like a real naturalist and everything that strikes her is noted. In April 1918 she writes that she will get a microscope as a present. At home she does experiments with caterpillars, of the nineteen caterpillars she takes with her, more than ten pupate. On April 30, 1918, Tera’s diary reads “Becoming Frik”. (Frik is the Dutch swear word for a kind of vexing and stickler schoolmaster) And on May 1, it is indeed stated in the newspaper that Ms. W.S.S. van Benthem Jutting got her  L.O. certificate (L.O. Lager Onderwijs = Lower Education)

But she doesn’t look for a job as a teacher. She wants to study biology. We’ll see that in the next blog

1 thought on “Growing up”