On April 30, 1918, Tera receives her teaching certificate. But she doesn’t look for a job as a teacher. She wants to study. And together with probably van der Sleen and Heimans, with whom she regularly spends time in the summer of 1918, she manages to convince her father. And so it proudly says in her diary First lecture Stomps! Professor Stomps (1885-1973) was Hugo de Vries’ assistant and has been professor of cytology since 1910.

Whenever I mentioned my project on Tera over the past few years and described in broad outline what she had done, the response was “What a special woman!”. The question then naturally arises how special it was that a girl of decent descent went to study biology in 1918.

Everyone knows that Aletta Jacobs was the first female student in the Netherlands. It is true that Anna Maria van Schurman was already allowed to attend university lectures in the 17th century, hidden behind a curtain, so as not to distract the male students. But Anna Maria did not take any exams. Aletta Jacobs received permission from Thorbecke, the prime minister,  to study medicine at the University of Groningen in 1871. Also around that time, the first women’s college at Cambridge University was established. In 1903, Marie Curie became the first woman to receive a Nobel Prize in Physics, followed in 1911 by a Nobel Prize in Chemistry.

One of the three first female biology students in Amsterdam was Anna van Bosse (1852-1942), who, together with Marie de Vries (a grandniece of the professor Hugo de Vries) and Margo Middelberg, registered in 1880 as a listener for the botanical lectures of de Vries. In 1883 Anna married Max Weber. More on that later.

The first woman to obtain a doctorate in malacology is Mia Boissevain (1878-1959) who obtained her doctorate in Zurich in 1910 on the Tusk shells (Dentalium entalis L.)

Johanna Westerdijk (1883-1961) also studies biology in Amsterdam. In 1917 she became the first female professor in the Netherlands. We also meet Johanna, Hans for her friends, later on.

In 1892, on the initiative of Cornelia de Lange, who would later become professor of pediatrics, the first female student association was founded in Amsterdam. All 30 female students  studying at the University of Amsterdam at that time were members. Followed in 1918 by the association of women with an academic education (VVAO) founded by, among others, Aletta Jacobs and Clara Wichmann (a Dutch lawyer) . At the end of the 19th century there were therefore 30 female students at the University of Amsterdam, spread over almost all fields of study, in 1938 there were more than 600.

The most precise table is from Tera herself. At the 40th jubilee of Queen Wilhelmina in 1938, the women of Amsterdam offer a Tribute to Her Majesty. Tera is asked to write a piece about Amsterdam’s female biologists. Tera writes about Anna Bosse and her two fellow students: “In any case, these first female students paved the way for the many young girls who came after her. So that now the studying female biologist is a common and valued appearance in the lecture halls, as is her graduate extension in society.”

For the same contribution, Tera makes a neat statement with the number of women and men who study biology at the University of Amsterdam. Due to lack of time she apologizes, she has not been able to make a comparison with the other three universities (Leiden, Groningen and Utrecht).

What is particularly notable is that around the turn of the century in Amsterdam, almost as many women as men started their biology studies. So was it special that Tera went to university? Yes, but that was less due to being a woman than to the fact that very few people went to university at all and the biology study was still fairly recent. 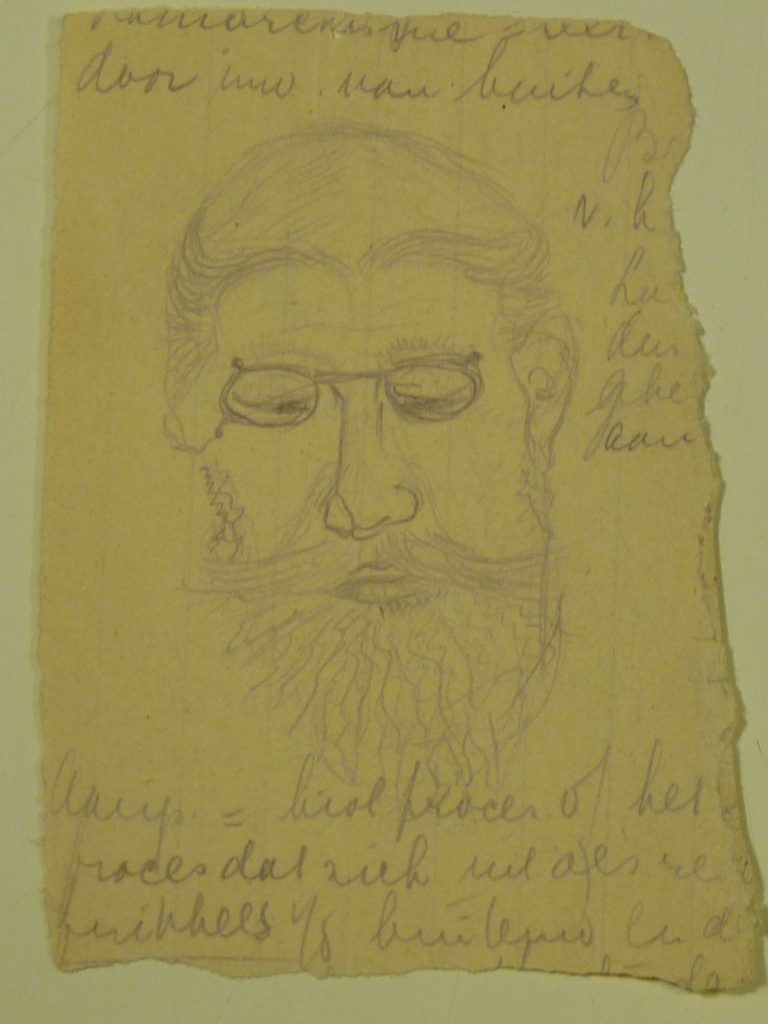 At university, Tera feels great. She attends lectures from Professor Weber in Zoology, Professor Sluiter in Anatomy and Embryology. With van der Horst she takes classes in invertebrates, and with Dubois, the “discoverer” of Java man, paleontology. Her college notes have all been preserved. She keeps meticulous notes. Her drawing skills are obvious. On the right is a drawing of  Professor Weber in the margin of one of her lecture notes.

She joins the Zoological Society and goes to lectures, on excursions, including to the water supply basins of Amsterdam to look for critters. She is also one of the founders of the Congo biology fraternity and on April 3, 1919, she is “mushy” at the first meeting of that fraternity.

In the summers of 1918 and 1919 she sets out with other students, teachers and other interested parties to Zeeland, Gelderland, the Veluwe, or the Wadden Islands. There is camping and research and they collect what nature has to offer. Birds and eggs, insects, snails, but also plankton. All of this is accurately identified and described. In the evenings they cook on primus and sing.

More plans are being made, but more on that later.