In the previous blog we ran into Non Scheffer, a friend of Tera’s from her student days. Tera’s first friend is Corrie Prince. Corrie was born on 17 May 1899 in Hoorn as the daughter of a doctor. Her parents are both from Amsterdam. In the early 1900’s they settled on the St. Annastraat in Nijmegen where they started a general practice. Tera also lives on St. Annastraat and the girls go to the same primary school. Corrie has a younger brother, Felix. When Tera moves with her family to Haarlem in 1911, the girls keep in touch.

On May 23, 1922, Tera’s diary reads: Note from Corrie announcing her engagement.

But before she can travel to Nijmegen to congratulate her, a lot is happening in Amsterdam. Weber gives his last official lecture and retires. Thijsse gets awarded an honorary doctorate and: He was at lunch and was of course congratulated, he was beaming!!! Told all kinds of nonsense from his biological childhood. Had great fun with it.

Moreover, Weber does not leave the Zoological Museum completely unattended. He thinks carefully about his succession and comes to fetch Tera on June 8 to discuss a few things together. Namely: 1. Whether I want to stay during the new course. 2. That Miss. de R. leaves, and a new assistant will have to come and who? Weber talks about Engel. I think that sounds great. Will discuss with Beaufort after coffee, because… Baasje has been proposed as successor!!! Hoera! (..) Absolutely Great!!! Boss also thought favorably about Engel and I’m going to telegraph whether he can come on Friday. I now come 3 times a week and get more money.

On 11 June they go with a whole group via Apeldoorn and ‘t Loo towards Eerbeek. First a meeting of the Zoological Society. Redeke shows proofs of the “Zuiderzee monographs” . Tera also casually mentions: Pico van der Feen on the train.

It wasn’t until June 12 that Tera saw a chance to travel from Eerbeek to Nijmegen to congratulate Corrie and hear about all the plans for the wedding.

The groom is Willem (Wim) van Voorst Vader. Willem is an engineer. His father bought the estate “De Bockhorst” in Spankeren near Eerbeek in 1906. The estate is used as a holiday- and summer home for the family.

On September 6, Corrie and Wim get registered to be married and there are parties in both Nijmegen and on the Bockhorst.

After that, the wedding is celebrated in a grand manner. No less than 6 days of all kinds of festivities:

Sept 20: To Nijmegen for the preparation of the wedding 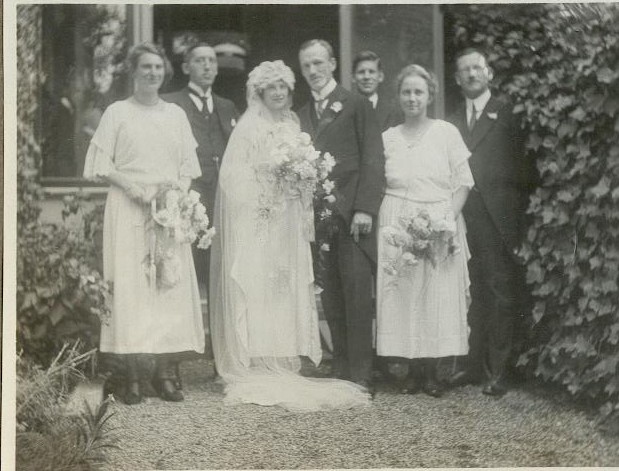 After her marriage, Corrie first lives in Rotterdam, where her husband is director of a tool factory, later in Dordrecht. In the summer they regularly stay at the Bockhorst estate. In 1924 their daughter Fenna is born and more than a year later their son Jan. In 1929 they have another daughter Didi. Tera keeps in touch regularly. 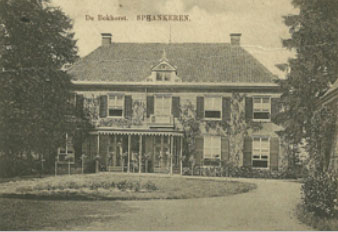 Like in the summer of 1925 : I was invited for a week at Corrie’s Bockhorst. Felix and Coos also stay there. Furthermore, there are always visitors (day-trippers). We laze around a lot, cycling, playing tennis and swimming, needlework and reading, so it’s a real holiday mood. Little Fenna is a lovely little happy animal and the star of the family.

She also likes to come to Rotterdam. In 1926 Tera visits Corrie in Rotterdam, when she returns from England, and arrives in Hoek van Holland: I was already at Corrie’s before 9 o’clock, where I first drank a few cups of tea and then helped the children bathe. Then to the zoo. There was a beautiful kiwi, who was scrounged up by the keeper from his sleeping cage. Also birds of paradise. (..) In the afternoon Wim brought me to the train and that way I got home safely.

In 1929 the family moved to The Hague, where Wim got a position at the patent council. There, in 1931, disaster struck for Corrie. Tera is then in the Indies and gets to hear everything through letters. On September 23, father Wouter writes to his daughter that Corrie Prince lost her husband the day before yesterday. They went on a trip to Switzerland and ate something there, which did not go well, from which Corrie recovered quickly, but from which her husband continued to suffer the consequences and which resulted in paratyphoid and finally pneumonia. I don’t know any more details yet. Poor Corrie, being a widow so young and facing the task of raising three children alone! Especially after such happy years of marriage! It’s in-tragic!

When Tera receives that letter and other letters in mid-October, the post to the Indies takes about a month or so, she writes: Thank you for your letter of September 23. It was only bad news, those reports about Wim van V.V. Poor Corrie, what is to happen to her. I received a long letter from her mother with details, because “Corrie didn’t want you to just get such a cold funeral card”. The dear soul has even thought of that, despite her grief! Felix and Nel Appeldoorn also wrote to me. I am glad that people understand so well how much I am touched by it. And I even received an airmail from Corrie herself from October 7, more or less, “beaten”. There really isn’t a word of good to say on it. Wim was not easy, but he knew it well. I liked him, also because he didn’t consider his wife’s girlfriends entirely “not important” (So this is pure vanity on my part) But he had undeniable many abilities. I wish I could do something for Corrie.

And if it’s not all sad enough, Corrie also turns out to be pregnant with their fourth child, who is  born in May 1932 about 8 months after his father’s death.

In 1934 Corrie remarries Jean Dumont, whom she knows from playing the violin. The ladies keep in touch. In the guest books that Tera later kept, the names of Corrie and Jean, as well as Corrie’s children, appear. Corrie eventually dies in 1976.

Pieter Goudsmit provided me with the photo of Corrie’s wedding and some interpretation of Corrie’s life. He is a son of Fenna van Voorst Vader and grandson of Corrie Prince. My heartfelt thanks.

What Tera has to do in the Indies comes later. Next time Tera must graduate first.