In the two previous blogs, Tera and Pico resumed international contacts after the war and expanded them further.

Tera corresponded with many other malacologists at home and abroad. Two correspondences really stand out. Namely the one with Hans Kuiper and the one with Louis Butot. She will correspond with both of them over 50 years and longer.

Louis Butot (1918-2008) was a malacologist. When he writes Tera for the first time, he is still a school boy.  Later he will study biology and, like Tera, specialize in shells and snails. She will advise and encourage him in this. Shortly after the war, he was sent to the Dutch East Indies as a soldier inof the M the so-called police actions. He prefers to write to her from the Indies about the biological expeditions he can carry out there in his spare time, but sometimes the horror gets in between: Rebels were hiding, while they said it was safe there, one hand grenade solved the problem.” . He always writes to dear Miss van Benthem Jutting, she writes to Honorable  Butot. After the war they get to know each other a little better and then she will write to Dear Louis .

Hans Kuiper (1914-2011) was an amateur malacologist and diplomat. In his “memories of the Wael” he himself writes: My contact with Tera dates back to 1933. I was eighteen at the time and had cherished for years a small collection of tropical sea shells, which my parents had sent me little by little from Batavia, bought at the fish market. I wanted to know the name of all those species and looked for books on the subject. So I wrote a letter to the curator of the Zoological Museum in Amsterdam. Tera replied promptly. That was the beginning of a correspondence that, with a few interruptions, would last more than half a century. In the war he loses his wife, due to a complication at the birth of their first child. He writes this to Tera, asking whether the Zoological Museum is prepared to take over his collection. Tera writes to Pico: From Kuiper (formerly De Bilt, now Bilthoven) I was offered the opportunity to take over his collection for the museum under a few conditions to be agreed upon. It would be an important acquisition: a lot of Central European material and a lot of Dutch, especially Clausilia and Pisidum. The man lost his wife in July giving birth to their first baby. She must have inspired him enormously to a lot of good work, because he has accomplished a lot in the 3 years of their marriage (everything as a hobby of a non-biologist). Now the fun has worn off for him; moreover, he is housed much smaller and cannot store the collection.

The collection is indeed taken over by the museum. Kuiper remains a good friend of Pico and Tera for the rest of their lives.

In addition to writing, both Pico and Tera travel extensively to view material in other museums.

The museums annual report of 1954 states: In the mammalian department, Mr. van der Feen continued the research into the fossil Proboscides (elephants) and also examined the material in various English museums for this purpose.

Further on in the same report it says: The curator Mrs. van der Feen-van Benthem Jutting continued her research of the East Indian mollusks. To this end, the museums in Basel, Zurich, Geneva, Stuttgart, Frankfurt a/M. and  London were visited. Under her leadership, students also processed shell material from the West Indies, the Mediterranean and the French coasts. 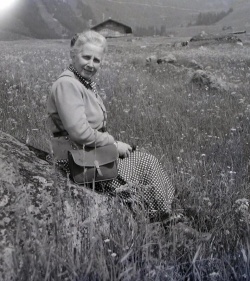 Both the visits to Switzerland and the visits to London will have been undertaken as a couple as much as possible. On the right is a photo of Tera in the Alps, ca. 1955.

In February 1958 she receives a letter from one of her Asian contacts; Professor. R. Purchon of the University of Singapore. He writes: You may be interested to know that I am trying to organize a Scientific Congress in Singapore in December of this year in honor of the Darwin/ Wallace centenary. In view of your work on the mollusks of this region, I wonder whether you would be interested in coming to Malaya to participate in the congress if it were possible to find funds for your transport? That is of course a great opportunity. She hasn’t been back to the East since 1932 and she wants to grab this opportunity with both hands. The conference organization informs the Dutch consul that her participation is highly appreciated, who informs the Ministry of Education, Culture and Science that her participation is necessary. The ministry asks the Academy of Sciences for advice, after consultation with the director of the Zoological Museum, the Academy advises positively. There was already quite some bureaucracy in the Netherlands in the 1950s.

In June 1958 she writes to Purchon that the subsidy has not yet been awarded but that she has heard from a reliable source that everything will be fine. She indicates which lectures she will give and then asks somewhat concerned: My husband asks what sort of clothing he should want for these days? Are there any official receptions where smoking (dark or white suit?) is obligatory? What is the required dress during the congress sessions. For eventual excursions khaki shorts and white or khaki shirt are presumably sufficient? For ladies the clothing problem is not so serious. In case of official receptions a long dress is, no doubt, necessary. Then, of course, there’s the problem of accommodation, and she politely asks how much to set aside for it: I have no idea of ​​the tariffs of such accommodation nowadays.

When the subsidy is awarded, everything is in order. Pico will travel with her at his own expense and will also give a lecture. He has never been outside Europe. The journey costs thirty-seven hundred guilders return per person (converted that is almost twelve thousand euros and almost four monthly salaries) and it takes more than thirty-six hours, there are stops in Rome, Cairo, Karachi and Bombay. Nowadays it takes about sixteen hours and it costs less than a thousand euros return. She gives two lectures there, together they meet many old acquaintances and they will  tell about it animated for the rest of their lives. 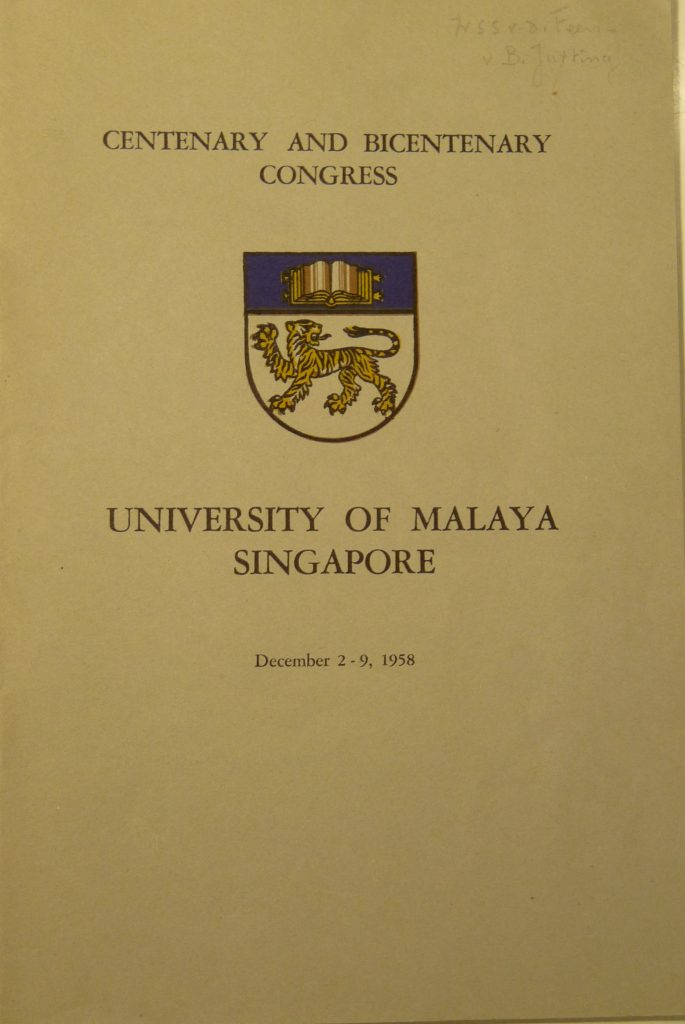 In next  blog we will see how Tera stimulates her assistents and how she is involved in the start of a European Malacological society.