In the previous blog we read about Tera’s travels abroad. She is now, after the war, a valued older colleague at the museum. Internationally recognized as a scientist and an expert when it comes to the ins and outs of the museum.

She supervises students, publishes articles and shows people around in the collection. Albertine Ellis-Adam remembers how she wanted to do an internship at the Zoological Museum in 1964: Mrs. van der Feen didn’t feel like it at all. She was going to retire that year and supervising an intern at the last minute didn’t suit her. Well, the professor had to decide. He smiled goodly and said, “Oh, just do it, Tera.” (..) in a short time I learned a lot from Mrs. van der Feen; determining with books in all kinds of languages, dealing with synonymy, making notes, morphology and terminology, labeling, building a card system. (..) But she also found time for so-called zoology amusement. Shells also differ in sound: in each hand a few specimens of two related species and then shake them in in turn(..) And – I was really in good graces – I got to see the Conus gloria-maris, one of the six specimens known at the time; I had to wait in the corridor, because I wasn’t allowed to see where the key to the safe was hidden and there it was on the table. That made a lasting impression. (source Schitterende schelpen en slijmerige slakken)

Her permanent assistant since 1958 is Siebrecht van der Spoel (1935-). On his first day as a student assistant, Tera gives him a stack of used envelopes, a letter opener, and a jar of glue, kindly requesting that the envelopes be turned over and re-glued so they could be reused. He thought it was frugal. When she occasionally wants to work in the shell collection, to put things away or to renew labels, Siebrecht is sent ahead to light the stove. Later, she encourages him to actually publish everything he finds and describes, under his own name, “never let anyone else get the benefit of  your work,” she tells him. Siebrecht later became professor of systematic and geographic zoology and specialized in marine plankton.

After the war, the work at the Zoological Museum, like many other companies and institutions, became more business-like and more organized. There came job descriptions, organisational charts and annual reports. In a 1952 report on the housing and furnishing of the Zoological Museum, written by the organization office of the municipality of Amsterdam, the following description is included:

Both Engel and Tera have a big social heart. Tera knows all the people at the museum, never misses a birthday, and many of the people she hires have a disadvantage of some sort. There is a former captain Geerlings, who was torpedoed three times during the Second World War and was traumatized as a result. He may have worked a little slower than the rest, but there was room for him at the museum. Siebrecht Van der Spoel remembers being asked what was wrong with him, otherwise he wouldn’t be working for Mrs. van der Feen 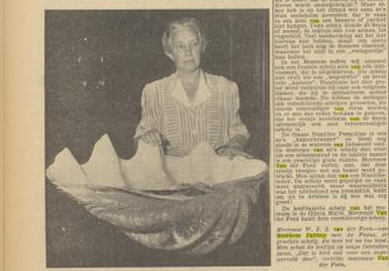 The financial resources are also becoming more generous, creating room for innovation, such as central heating in the museum. There is more publicity and in both 1953 and 1956 Tera gives an interview to Algemeen Handelsblad about the shell department of the museum. (Pictured Tera with the “Giant Clam” (Tridacna gigas), the largest shell known to date, AD July 4, 1953)

In both interviews, Tera emphasizes how useful shell research is. Firstly, to gain purely scientific knowledge, but certainly also economically important, for example for mussel and oyster cultivation in Zeeland. Moreover, by conducting archaeological research, the age of earth layers can be determined by studying the shells present in that layer. Below a piece of the article of august 1956. On the womenspage of the newspaper. She wouldn’t have liked that. 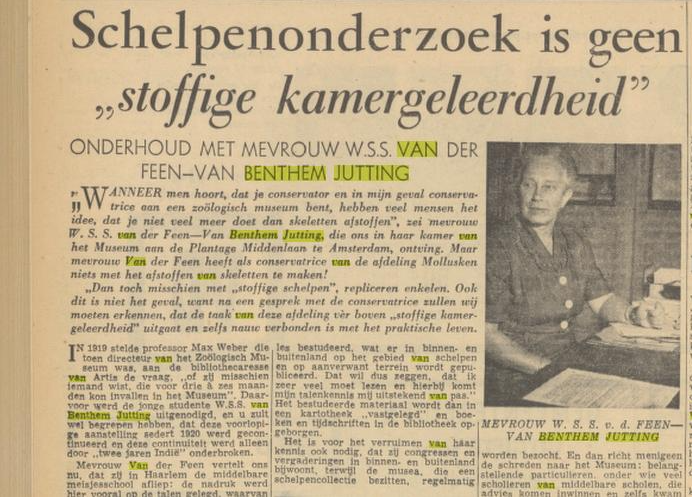 .After the war Tera tries to merge the Mollusc Committee, in which she has been active since 1919, with the Malacological Society. In 1952 she gives a lecture to the Malacological Society, in which she proposes to merge the two institutions. This merger finally comes about in 1955. The collection of shells of the Molluscs Committee was then housed at the Zoological Museum, where it was already actually located due to Tera’s involvement, but now both collections could be integrated. Together with van Regteren Altena, her Leiden counterpart and colleague, Tera remains the editor of the magazine Basteria. 1959 marks the 25th anniversary of the Malacological Society. In honor of this, a large shell exhibition is being organized at the Zoological Museum, and international guests are also invited to the anniversary meeting. The Algemeen Handelsblad pays attention to the exhibition: An interesting, tastefully decorated exhibition has been created in the Zoological Museum of all those facets of the shell, zoological, cultural and economic. It lacks a gigantic petrified shell, the ammonite, as little as a large shell covered with mother-of-pearl, from which buttons have been drilled. The exhibition is mainly the work of the curator of the shells department of the Zoological Museum, Mrs. W. S. van der Feen-van Benthem Jutting, who also wrote a guidebook for this exhibition, which was organized on the occasion of the 25th anniversary of the Dutch Macological Society.

Here the guests of the jubilee assembly before the Zoölogical museum. Tera is the woman fifth from the left.

According to many, with this international meeting Tera gave the impulse to the founding of the Unitas Malacologica Europae in 1962. Such an European union can be seen entirely in the light of European cooperation after the Second World War. In order to ensure that a disaster such as the war would never happen again, there was a focus on cooperation in both political, cultural and scientific fields. Together with Pico and her assistant Siebrecht van der Spoel, Tera attends the founding meeting of this union in London in 1962. According to van der Spoel, at such a meeting Tera was able to influence the meeting with her feminine charm and she personally ensured that the Netherlands was the second to sign the deed of incorporation.

In the next blog we will read how Tera is knighted.