In the previous blog we read about Tera and Picos honeymoon.

In the first few months after the wedding Pico spends a lot of time in Zeeland. He wants to get the Wael back in order and to get the museum in Middelburg up and running again. Tera goes back to work in Amsterdam. Her official name is now Mrs. van der Feen-van Benthem Jutting. To avoid confusion, she decides, undoubtedly with Pico’s approval, to continue publishing under the name of Benthem Jutting. In 1945 only one article of hers appears, in 1946 there are again seven, a fairly decent average.

As we saw in the previous blog, Walcheren was heavily bombed by the Allies in October 1944 with the aim of flooding the island. This was necessary to secure the Western Scheldt and thus a shipping route to Antwerp, as can be seen in the film “The Battle of the Scheldt”.

Shortly after the liberation Tera remarks somewhat bitterly about this: the great tragedy of the whole case: that Walcheren was sacrificed to liberate the Netherlands, something that is not yet fully realized here in the North. The inundation of Walcheren lasts until early 1946, when all the dikes are closed again and the water is gone. In tonight’s newspaper it says that Veere is also closed, and that draining will start as soon as possible, as soon as the dike no longer is permeable.  That is sooner than to be expected. I would like to see what the exposed country looks like. Desolate and void like the creation story. There will come some difficult weeks for the people now. Since it is too wet for road traffic and too dry for sailing.

As a scientist, this period also offers Tera a unique opportunity to investigate the effect of this inundation on the mollusks of Walcheren. She therefore quickly asks family and friends in Zeeland to send her photos and any specimens. Brakman sent me a letter with a detailed report of his cycling trips over Walcheren and the marine organisms observed. At least he delivers and gives me  something to work with.

Brakman himself writes (see above the formal preamble to his letter): There are incredible loads of mussels there (near Rammekens, near Vlissingen). Cardium (cockles) can also be found in abundance, sometimes as much as 200 per m2. They can be counted quite accurately, because when the ground runs dry they come up and become exposed. In several drinking wells of former pastures, animals lay decaying, so that the remaining seawater was horrific to see and smell. It is sad that there have been so many minefields….

Tera collects all the information and in the course of 1946 she writes to Pico: I now have a “nice” piece ready about Marine organisms in the island of Walcheren during the inundation oct. 1944- Sept 1945, with 1 card and 2 or 3 photos (depending on what you can get your hands on in terms of mussel vegetation on houses and shrubs.

She begins by describing the actual bombings and then writes: What have been the consequences of this unfortunate experiment for the flora and fauna in the flooded areas? The answer is easy to give: every tree, shrub and herb that has come into contact with the seawater has died, and so have the animal populations of land and freshwater. Only the dunes, the two polders in the north and east, the three cities of Middelburg, Vlissingen and Veere and the village centers that lie at a low altitude, were refuges for vegetation and fauna. On the rest of the once fertile island, organic life had been obliterated and now, after reclaiming, these areas are an endless barren plain without a single blade of grass, recalling the earth in the beginning of creation: “And the earth was shapeless and empty”.

She published the “nice” piece of fifteen pages in the magazine of the Zeeuws Genootschap in 1946.

The name van der Feen sometimes causes some confusion. An amateur malacologist, Gerrit Doeksen, remembers how he stayed with family in Amsterdam around 1960 and decided to take the opportunity to have some shells from Terschelling identified at the museum. He writes: The big names for their research and publications were of course at that time: C.O. van Regteren Altena and Tera van Benthem Jutting. Actually they were gods. There are some things I remember well about that visit. The very friendly welcome in the museum. “Shells? Oh, then you should be with Mrs. van der Veen”. Well, I would have preferred van Benthem Jutting, because I knew she also worked in this museum. But as a young collector you can’t expect to end up with the great specialists. 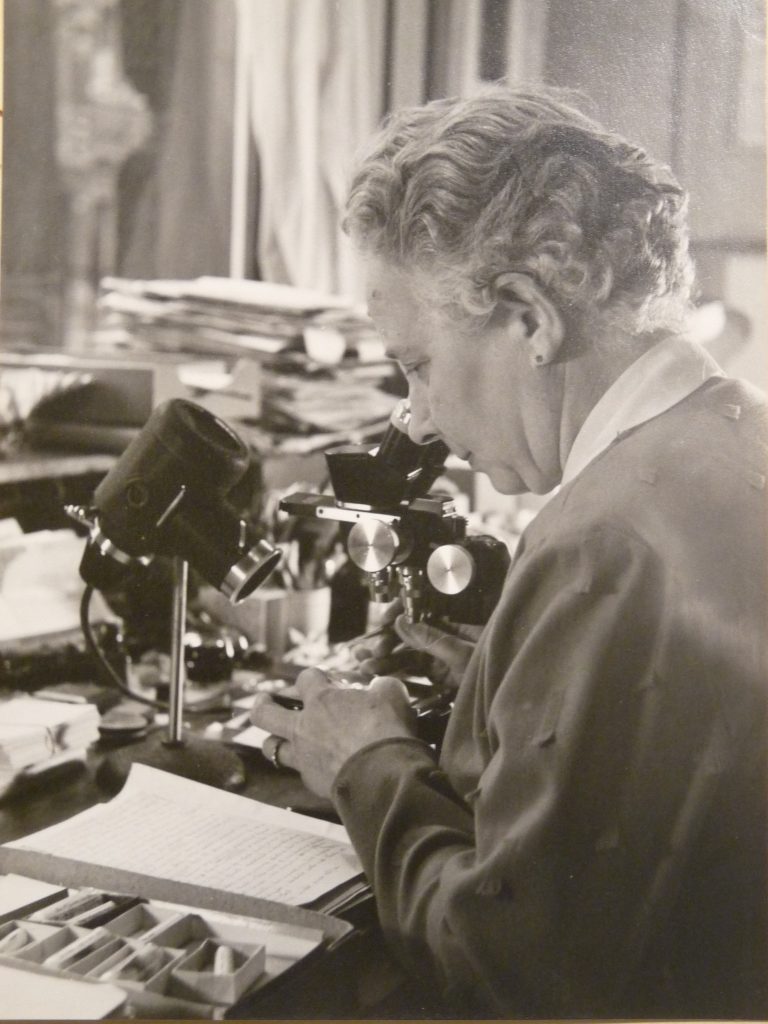 Fortunately, this lady also knew quite a lot about shells, I noticed. I still remember her slightly curly hair and the not too large room with a lot of light coming in from above. When she looked at the shells and separated them by type, she mentioned that, Mr. Wesseling could also have identified them well on Terschelling. I can’t remember my answer, but I probably wanted more than 100% certainty at that young age. (…) I found the visit to Mrs. van der Veen very informal and pleasant at the time. She even wrote down my name somewhere….

The mission was successful, because at least I now had shells with an official “museum identification”. And that’s what it was all about. I didn’t think about this visit for a long time. Until years later, it may even have been decades, I made the link. After all, Tera van Benthem Jutting was called: Tera van der Feen-van Benthem Jutting. So I had been to one of the gods after all!!!

So life is somewhat normal again after the war. More aftermath of the war and a big article to write in the next blog.