In the previous blog, Tera went back to work after the honeymoon and wrote an article about the fauna of Walcheren after the inundation. 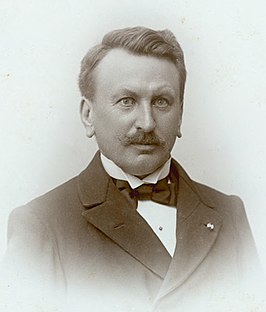 During the last war winter, Tera wrote a biography of Jan Govertus de Man to get through the long evenings. J.G. de Man (1850-1930) was a Zeeland biologist. He studied zoology in Leiden and after his PhD became curator at the National Museum of Natural History in Leiden. Later he was honorary curator in Middelburg. He bequeathed his extensive zoological library to the Zoological Museum Amsterdam and partly to the Leiden museum.

Tera came up with the idea of ​​compiling a biography about De Man sorting through Weber’s papers: When I recently got my hands on those travel booklets, I made the decision, and I’m already collecting data. Above all, it should be something in the spirit of: “J.G. de Man, sketched from his works”. Since I occasionally also deal with crustaceans, I can understand the scientific scope of that work. The personal and, above all, the peculiarity of De Man should only be sketched briefly and is not that important; there is no need to push human shyness to the fore like that. And was he really drinking from time to time? My composition may never be published, but I write  it now, as long as Miss de Man is still alive and can clarify some points.

Jan de Man was a good friend and admirer of Max Weber, Tera’s most important teacher. In 1942 Tera writes: While sorting the Weber papers I found correspondence with De Man during his stay in the hospital, autumn 1929. Sometimes he writes himself, sometimes the nurses send a bulletin. In one of these letters I found the following passage (after W. apparently informed De Man that I would soon be going to the Indies): I hope that Miss. V.B.J. will have a pleasant journey and will benefit a lot from her stay in Buitenzorg. It is hoped that her health is up to it; on her father’s side she does not come from a strong family, two of her uncles have died of tuberculosis, – Well, I have thought of many things before I sailed to the East, but certainly not, whether I could stand it!

Tera vigorously begins gathering information. In 1944 there is a small hitch as Ms. Ali Buitendijk from Leiden also wants to write a biography about De Man. Tera promptly writes to Pico: Now look at the enclosed letter! And tell me: what Teertje should do? Shall I withdraw and give my notes to Ali? Or shall I try to make her back down so I can do everything myself ? Or shall we join forces and work together? The latter case would, in my opinion, make a somewhat comical impression: 2 women who write about De Man (Holthuis is a very young lad and negligible as a person). In my opinion, our museum has much more personal memories than the Leiden museum, because de Man never liked Leiden and had great admiration for Weber. It is also my opinion (an immodest opinion, admittedly) that I am more suited for that task than Ali. She is not that accomplished.

Ali Buitendijk (1903-1950) works on crustaceans in the Leiden museum. There is clear competition between the Amsterdam and Leiden museums, but there is also a need for cooperation. The Holthuis she mentions is Lipke Holthuis (1921-2008), indeed only 23 in 1944, but he will later develop into an internationally renowned scientist also in the field of crustaceans. In order to settle the dispute, Tera travels to Leiden in September 1944: I will go to Leiden on Tuesday to see the newly acquired Mulder collection and to talk about De Man’s biography.

The ladies apparently come to an understanding and in the winter of ’44-’45 Tera writes her story: My lighting went until New Year with floats in patent oil. Then I bought a carbide lamp, which I like much better. As long as it was daylight, I laid out everything I thought I needed in the evening around me. Because it was impossible to search with that little kernel in cupboards and card systems. For example, I have compiled Jan de Man’s biography with great care and pleasure. I am very curious what you will think of it. It now has to go to Leiden to be supplemented by Ali Buitendijk.

In the course of 1945 and 1946 she further updates the manuscript, partly with Pico’s instructions. After that, of course, it still has to be published. She writes to Pico: If you speak to Unger, ask him about J.G. de Man for Archive ZG. The manuscript is 80 pages in quarto format. Many of the quotes  from the travel booklets, can be printed in small letters . This costs less paper and is also more readable.

Unger is secretary at the Zeeuws Genootschap and probably editor or editor-in-chief of Archief; the then magazine of the same society. Ultimately, the more than 60-page biography was not published until 1951 in the Biological Yearbook from the Royal Natural Sciences Society in Ghent.

In the next blog we will see how Pico and Tera build a life together in Amsterdam.