In the previous blog we saw Tera moving to the Parnassusweg in Amsterdam. 1933 is an important year for Tera. Her father dies, she moves house and she gets engaged to Pico van der Feen. 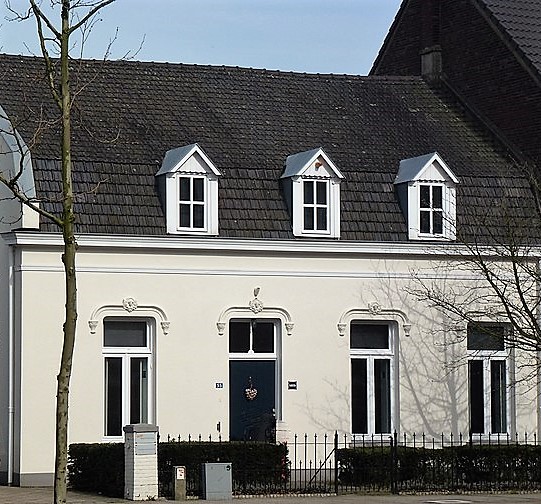 Pieter Jacobus (Pico) van der Feen was born at the Stratumsedijk in Stratum (now part of Eindhoven) in 1892, where his father is a court clerk. (See image opposite for his birthplace.) The van der Feen family is a Zeeland family, Dutch Reformed and wealthy. Pico’s father had been married before and had become a widower in 1887, after his wife died in childbirth.

In 1890 father van der Feen married Elisabeth de Bats; their first child is born in 1891, but dies very shortly after birth. Pico was born in April 1892, he will remain the only child in this relationship. As a child Pico is called Jaap, when that changed to Pico is unknown, but probably in his student days. Father already has two sons from his first marriage. When Pico is six months old, the family leaves for Zutphen, where his father once again becomes a court clerk. His mother’s sister moves in with them and the two half-brothers now come over from Middelburg to Zutphen. The registry office of Zutphen shows that they lived there at IJsselkade no. 184. Both half-brothers leave after a few years and don’t play any  important role in Pico’s later life. They both move to Germany at some point after the First World War and after the Second World War they live in East Germany. I haven’t been able to find much information about them.

In 1903 the family leaves for Domburg where they take up residence in Villa De Wael. Domburg was very popular in the Belle Epoque as a fashionable seaside resort, especially because of the large Badhotel. Sissi, Empress of Austria, the Russian count Stroganoff, Queen Sophie of Sweden, and many other famous figures came to Domburg. Artists also moved to Domburg, such as Jan Toorop and Piet Mondriaan and the poet Adriaan Roland Holst.

Pico goes to the latin school in Middelburg. After that he will study biology in Utrecht. He will mainly become interested in large mammals and in prehistoric animals, such as mammoths. 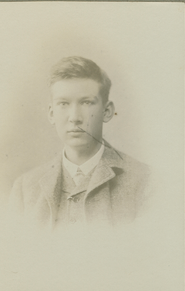 Traveling through the Netherlands , Pico’s father had come up with ideas for the renovation of his newly purchased villa. He had noted three addresses of villas. All three turned out to be built by the same architect. He contacted him. The architect devised a building plan. The lower room of the tower built in 1890 was included. Virtually nothing remained of the rest of the original De Wael. The result was a villa in Art Nouveau style, a kind of English country house. Father van der Feen thought it was too big, after all there were only three of them. He wanted a slightly more modest housing. To which the architect, as Pico recalled many years later, replied: “But do you don’t think I will travel all the way to Domburg for a smaller assignment, do you?”. Zeeland was then still difficult to reach and the journey to Domburg was laborious. No train connection further than Middelburg, and only a few bridges. So the design had to be adopted. Unfortunately I have not been able to find out which architect it was.

Sits cozy with Weber on the tram in the morning, tells whole stories. Madam at the museum at 11 o’clock, both leave before coffee. In the afternoon with de Beaufort looking out of the toilet  window looking at the loose Javanese eagle. Made great slides over the garden. Van der Feen from Utrecht shows his face, tells whole stories during coffeetime at Nons.

Until 1926, he appears in her diary only four times as one of the guests at the coffee table, and once she is on the train with him on her way to a meeting of the Zoological Society. When she writes to him in 1927 to ask him to review an article on behalf of Bierens de Haan, she begins with a formal salutation: Waarde van der Feen, but she also asks amicably how are you? However, Pico does not appear in all correspondence from the Indies.

Shortly after Tera’s return from the Dutch East Indies, the relationship with Pico changes, and a more intimate friendship develops. It is not known exactly when Tera and Pico secretly get engaged, at least before 1940 and probably as early as 1933. An assignment in a novel by Van Schendel that Pico gave her in November 1933 reads: “A drifter lost: my dear Tera , such a wanderer am I, but not yet lost, 30 Nov. 1933”. She is thirty-four then, he almost forty.

Niece Mien writes years later that Tera had to wait twelve years for him, which indeed gives 1933 as the year of engagement. It is also not certain why the engagement happens secretly. There is a story in the family that Pico was not allowed to marry her by his parents, with threat of disinheritance, that is nothing more than a vague rumor. Pico had already been engaged in his younger years, but that relationship was broken off under pressure from his mother. An acquaintance of Pico says: “His mother was very overbearing, and wanted her son all to herself”.

Later memories of acquaintances state that as an only child, Pico had for a long time cared for a “nervous mother” and did not want to shirk that responsibility. In any case, this seems logical and is substantiated with fragments from later letters.

Tera and Pico start writing to each other. In the war years in particular, several letters go up and down every week. Unfortunately Pico’s letters to Tera have either not survived or I have not been able to find them. The first surviving letter from Tera to Pico dates from 1936 and concerns a recipe:

I was able to get Preisselbeeren (cranberries) again today and because you liked them so much recently, I’m sending you a parcel here. They certainly don’t grow in Domburg!

They must be washed, and the stems, twigs and other debris sorted out. Then on the fire, without water (what remains from washing is enough). Stir during cooking and crush the berries that do not break on their own with a wooden spoon. There is a lot of sugar in it, for this amount I estimate maybe 10 full dessert spoons. Should be arranged according to taste. When all the berries have become mush, remove from the heat and strain through a fine sieve until only the peels and seeds remain. Then it’s a pretty thick sauce. If you want it  even thicker, it should be thickened with a little gelatin or Sago

I hope it will be a success.

She still signs here with her full name. Later she writes:

Brakman wrote in a letter to Engel that he had met me in Middelburg, and “I suspect that her company interested her more than our little provincial museum.” How strange that he noticed! Lots of kisses from T.

Pico most certainly was part of the mentioned company. Tera has just been to Domburg, where Pico lives on De Wael with his two elderly parents:

In her letter she also writes:

How nice it was Pico, to talk together again. At first I sometimes find it difficult to completely follow your thoughts and behavior again, and you have to be very patient and not get angry if I do something wrong. (…) I hope the task doesn’t become too daunting for you, the commotion in the house with two disabled old people, annoyance with staff, and lack of exchange of thoughts on the thousand subjects that keep you busy.

It is clearly not easy to adapt to a man for an independent woman like Tera. Villa de Wael will be discussed and illustrated in detail in later blogs. First we say goodbye to Professor Weber in the next blog.