The photos of the flying adventures are shared with the rolpensclub:  Big coffee party: Weber, Baasje, Bussy and van Tienhoven. Tienhoven is very determined to see my flight photos and drawings.. Weber is chuckling out loud and telling silly stories about Treub not wanting to get married.

From the moment Tera works in the museum, there is a daily coffee table. The coffee, or the coffee table in those days is the lunch that is eaten at about twelve o’clock. In the Artis restaurant people drink coffee, eat a sandwich and have a cup of soup. As far as I have been able to ascertain, that restaurant is located in the same building where restaurant De Plantage is now located, but I am not entirely sure. That coffee table is becoming a phenomenon, everyone who has anything to do with Artis, the museum or the biology study regularly comes for coffee.

For example, on September 1, 1921: we went to visit Weber in Amsterdam. First chatting with Beaufort for a long time, who has worked through the entire holiday like a good owner. Have to tell everything. …. After a long conversation with Mrs. Kerbert returned to the museum where Mrs. Weber arrived. Very heated debate, continuation at the coffee table and laughing!! After coffee with Mrs. W in the garden (Artis) to feed the horses, and then put her on the tram. Some more discussion with Max and Baasje .

A few months later a regular guest book is introduced: Over coffee a regular guest book initiated from the lunch table, in which all zoologists have to sign. “Max Weber, oldest regular” at the top. The whole thing is called: contributions to zoology. Weber tells all kinds of stories from the old days of Artis and his first lectorship and professorship years “Ils sont passés ces jours de fêtes”.

The permanent core of the coffee table was renamed “de Rolpensclub” sometime in 1922. This is where the student nonsense, the jokes, the poems happen. (Rolpens is an old Dutch meat dish,  stuffed and pickled paunch, not very common nowadays)

L.P. (Cosquino) de Bussy (1879-1943) is director of the trade museum of the colonial institute, where Bierens de Haan also works. He is a biologist and mainly entomologist (insect science). He is mainly specialized in tropical culture. He worked for years in the Dutch East Indies on Lands Botanical Garden. In 1925 he will become a professor in Utrecht. 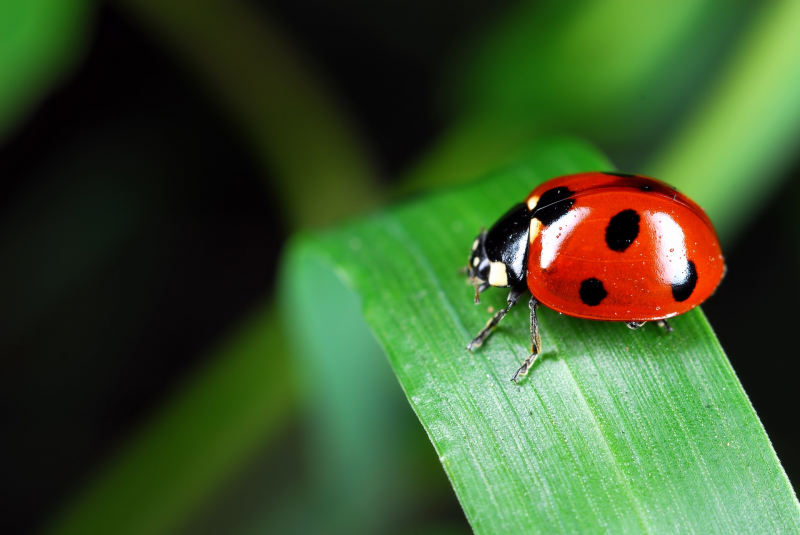 In 1921 Tera already wrote a poem for Max Weber. Weber, whose birthday is on December 5, can expect Sinterklaas poems as gifts:

With a many times life-sized Coccinella (ladybug) of chocolate:

When professor in the season

And pursues them with pot and net

On manhunt many days

Then they fall prey in a daze, and soon they discover too

A crowd a whole bunch, of red Coccinella

It’s quite a tour in Eerbeek

To sort them out again

The professors table is full

A silent sigh is whispered, it almost seems like hell here, yes,

I wish I never caught them, that lame Coccinella

On the wings of the north wind

Who is not bound

Will this complaint be transported?

She strikes Saint Nicholas’ watchful ear, He calls: You should be ashamed!

But then: I will help you, because we have a birthday together

Can one learn a lot from him?

AS a response Weber participates in the fun and the Sinterklaas poems: Weber sends me a large package with a Nautulus filled with chocolates and a purse in between! Benthemia Beursigera. I sent him back a detailed diagnosis of the new species.

Tera is regarded as the radiant centerpiece, “the secretary of the Rolpensclub” as Weber comes to call her. On birthdays they send each other telegrams in rhyme and flowers, they treat each other on special fruits  at the table.

Like on March 23, 1924: when De Beaufort’s birthday is: Boss’s birthday, Bierens de Haan sends a telegram, on behalf of the rolpensclub. The next day De Beaufort is present again: De Beaufort brings large Deventer cake with him for tea and treats  on oranges at the coffee table. 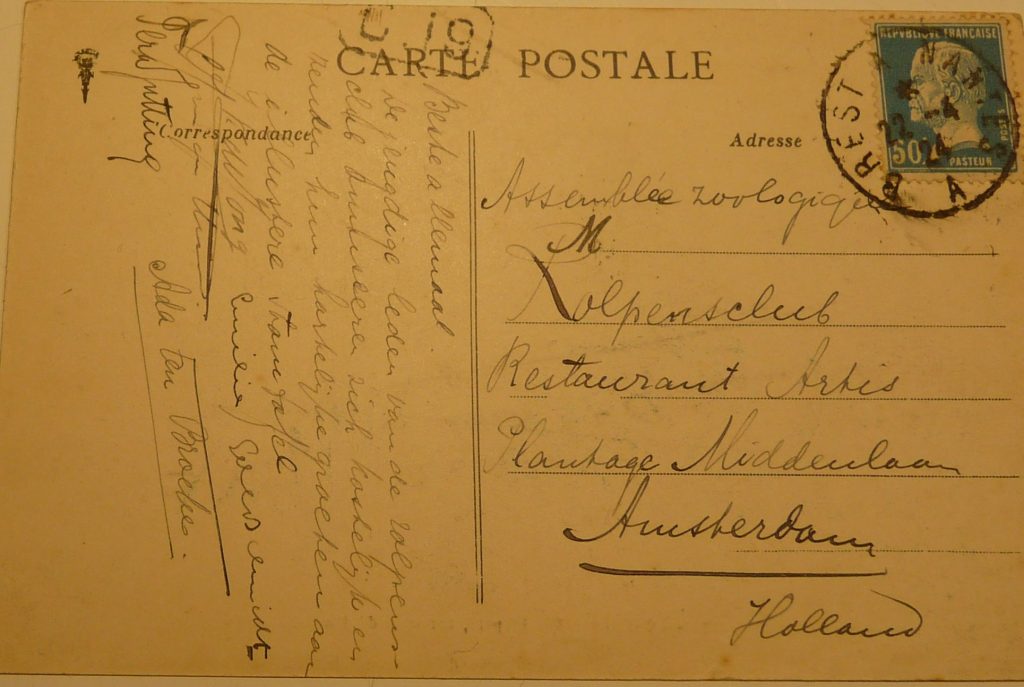 When a number of members of the club go on a study trip together, they send a beautiful postcard. The address is especially interesting. It just arrives with half written address  from France in 1924.

Even when Tera is later in the Indies, she is not forgotten by the rolpensclub: My birthday was very pleasant, it started at 6 o’clock in the morning when a huge bouquet of white orchids was delivered from the coffee table as a gift. Very nice of the Amsterdammers.

The Rolpensclub remained in operation until the start of the Second World War.

Did he have to plow and harrow himself

But Tera’s only occupation here

Is putting salt on snails.

So much for this student nonsense, next time even more student indulgences: a study trip to Helgoland.