The first adventure I myself heard about my “aunt” Tera was that she was the first van Benthem Jutting to have flown. Growing up in the 1960s, when civil aviation was expensive but already quite common, I didn’t think that was terribly special, even though I had never seen an airplane up close. Now I know how special it actually was! 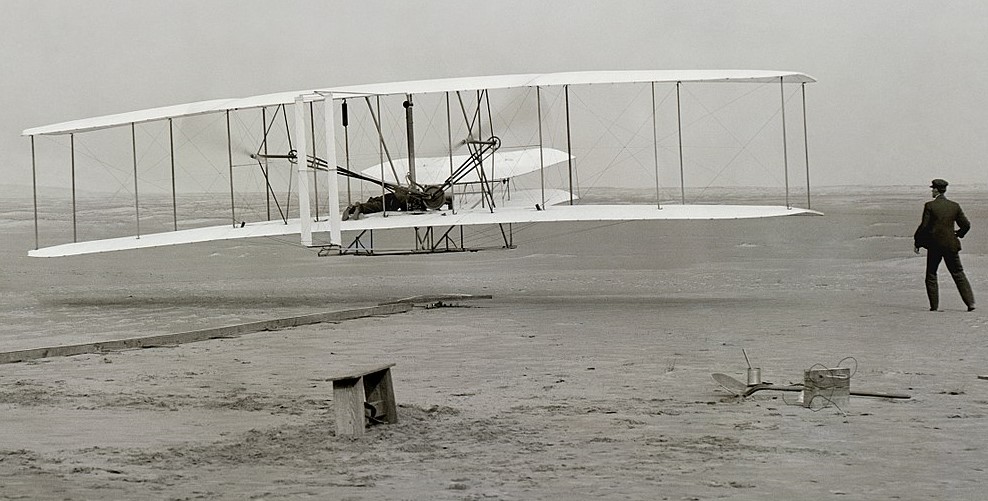 On December 17, 1903, a small miracle happened on a meadow in the dunes near Kitty Hawk in the United States. The Wright brothers, who had been experimenting with building gliders for a few years, did their first trial with a powered aircraft. Casual observers were staff members of a nearby weather station. The first flight of 12 seconds over a distance of 37 meters was immediately improved by a better result that day of 59 seconds over 260 meters. The start of a rapid advance of aviation. On October 5, 1905, their third aircraft had already been improved so much that they covered a distance of 38 kilometers in 38 minutes. In 1909, after contacts with the Wright brothers, Louis Blériot was the first to fly over the English Channel. The First World War ensured rapid technical development. The first all-metal aircraft was the Junckers 1, a German aircraft that first flew in 1915. Planes were used for bombing raids and inspection flights on both the German and the Allied sides. In the Netherlands, the Naval Aviation Service (MLD) was established in 1917, stationed in Den Helder at the Naval Air Base De Kooy, commanded by Karel Doorman.

In 1921 flying is still mainly a military affair. KLM was founded in 1919 and in 1920 the first commercial flight from Amsterdam to London was effected. However, there were not many passengers at that time, it was mostly mail that was being transported. Flying was also found to be extremely unsuitable for women. The first Dutch woman to hold a pilot’s license, Beatrice de Rijk, had left for France in 1909 to receive flying lessons because she was refused entry in the Netherlands. Her offered help in the First World War was also rejected.

Amelia Earhart, the female aviation pioneer, is only two years older than Tera, having first boarded an airplane in 1920. She would eventually become famous as the first woman to fly solo across the Atlantic in 1932.

On June 21, 1921, Tera’s diary reads: Been flying! Had tea at Redeke’s in the evening. As if it’s the most natural thing in the world. Due to her involvement in the Zuiderzee project, Tera is regularly in Den Helder. There she would undoubtedly have come into contact with the pilots of the Naval Air Base de Kooij.

Fortunately, it does not stop at that one time and on September 12 of the same year she reports extensively on her second flight:

With Wicher in the morning at 07:47 to Den Helder in flight uniform. Rain showers while we are on the train. Got to de Kooy (airport), no way we can go out. Hang around in the lounge. Lots of old friends and a bunch of new ones. Back with the commander and talking nicely, a terribly stuck up little fellow. Had lunch there. I sat quite princely next to Doorman. After the coffee suddenly good weather and we left well wrapped up. I again with Tekenburg 2.04 ascending in a short spiral above the Koog in F4. (…) The view is beautiful. Cloud shadows. How small North Holland looks! To the south on Wieringen. It’s not cold here. Steamboats in the Wieringermeer. Crosses 2.09 In the West, puddles behind the dike, everywhere with these inlays. Entire coast is dyked, I would not have thought that, I thought that because of the boulder clay core Wieringen was much higher than sea level. One puddle in the W. looks like boulder clay. Little tufts on the waves. Zuiderzee projects isn’t much yet just a small harbor at den Oever. Turning 2.15 and we go back along the South side. Why don’t you see anything of the F6. Our own shadow on sea and land. 2:21 back at the end again and we go another time along the coast, Stavoren vague. Carts on gravel road look funny. It’s not quite clear, that’s a pity (..) Rise and on towards the Koog, it is getting cold now, still beautiful sun. Almost up in the white clouds, next to a dark cloud, through fog. Through patches of fog and above the clouds. Our shadow in a halo, it’s only on a certain layer, sometimes you can’t see it. There are a lot of machines on the De Koog site. Lovely to fly in the clouds, between the clouds and still a view. I think we’re going to England. Above Schulpegat 2.44. Steep white cloud with a dark shadow. Pink tinted, beautiful isn’t it. Everywhere those fat heads and blobs and a radiant blue sky that rests on it like a dome. Wonderful fresh mountain air. There he climbs to the highest peak (2200 m) and then an overview so beautiful! The pilot turn off the engine and yells: Nice isn’t it! Drop and swallow. Takes a long time because it descends gradually. Droplets along the decks, where would we end up? Still fog. What are we doing weird. Get right above the point. There is another machine, flopping behind a cloud (Soesterberger), which is now crossing Texel. We above Marsdiep 2.55 On Onrust wind dunes beautiful. Hillock is like a lick of applesauce on a yellow pancake. Oh how strange we are now and what a wind in your stomach. (..) North point 3.30. Dune continues around the northern tip. At the lighthouse of the Cocksdorp terrible blowholes, which have been overgrown with dark vegetation. Along the Wadden coast. Back at the head 3.45 Let’s go and see what that big boat is called: De Gelderland. Rise by swinging to the side. Hang above the airport for a short while. home 4.

Splendid weather and at 07:47 with the express train to Helder. It gets more beautiful by the minute. (..) Me in flying overalls from Van Vloten, without a skirt, had to change in the room of the officer of the watch (..) 12.07 start towards the east (never been done before) in a short spiral, then away to the dune region. Clear sky, but a few cumulus clouds. High tide, still sea, a steamboat. Flying over land Zwanenwater, Hondsbossche: waves crawl along the breakers. (…) Engine grunts louder. Next to Bergen aan zee 12.26. What kind of huge thing is there, if you look from Egmond aan Zee South East? Oh it’s smoke from the Zaan region. 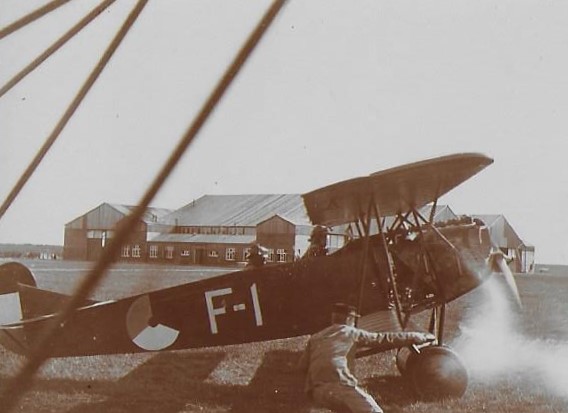 How wonderful it is. At IJmuiden quite a few boats in the sea. (…) To Haarlem (..), I waved good day to father and Chris. The city is nice from above, south of Haarlem diagonally back to the sea. The bulb fields will be fun. (…) Scheveningen next to us, puppet tram on the Hofplein.

Now thick clouds and the sun is gone. Colder. Greenhouses in the Westland glitter. We rise. It will not be clear at 3000 m. (..) Peep there is Schouwen 1,25. Oh dear now we are above Walcheren at 1.33. How nice it is here. (…) Rise, keep the coast. Flying way above the clouds. (..) Engine off: Have you seen everything fine, miss? YES! Shall we? I fastened all straps very tight, 1.55 and rrrt there we go 2 tonneau’s over the left side and a loop. Then chocolate came out of my nose. Keep it in! And in the craziest jumps at Middelburg. Shall I swallow! Well, no just spit it out. (..) To the east over Noord Beveland, we were too high to see the dunes well. I come round a bit. Via Bergen op Zoom, Breda, landed at Gilze Rijen 3. The pilot is upset that I have been sick, but I don’t mind. Half stepped out of van Vloten’s overalls, because I wasn’t wearing a skirt, and sat down to eat and talk. Up at 4 o’clock in the direction of Oisterwijk. (..) We descend and soon the sun goes down. Idiotic view! Landed 5.50 Quick out of my overalls and to the lounge. Had a nice meal there.

She loves it, is not afraid of anything and tells her stories to anyone who wants to hear it. She has taken pictures and likes to show her flying shots to everyone. Later in the Indies, too, she will easily board a plane.

Next time we will read about who she shows her photos to when she drinks coffee with her friends.