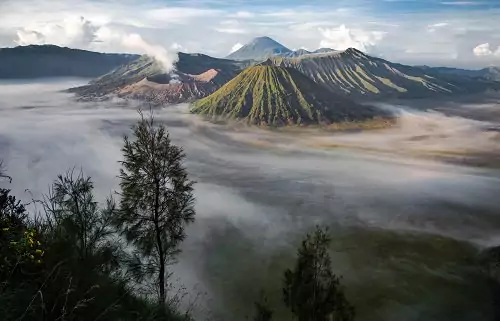 Last time we saw that Tera is now properly installed. She works, lives, parties and goes on excursions. Special excursions are those to Tjibodas.

Tjibodas is the mountain station that is part of  Land’s botanical garden. Tjibodas was added to the botanical garden by Melchior Treub in order to be able to research the mountain flora and fauna of Java on location. In 1891 a spacious guest house (passanggrahan) was built with four bedrooms, a library, a veranda, dining room and kitchen. There is also a laboratory and a herbarium.

Kees van Steenis praises Tjibodas extensively in his: “Brief Sketch of the Tjibodas Mountain”: “Everybody who has visited Tjibodas -and its visitors number many thousands -with its magnificent layout on the edge of the primary rainforest ranging to the lofty summits of the twin-volcano Gedeh-Pangrango has been impressed with the admirable site. Professional and amateur scientists as well as tourists the world over share the view that Tjibodas is a pearl in the crown of Indonesia.” In the photo above an impression of these double volcanoes.

Tours are made from Tjibodas. A permanent supervisor is present and all staff members of the Botanic Garden work at Tjibodas for shorter or longer periods of time. In addition, Tjibodas is used as a kind of holiday resort to spend for example, the Christmas holidays together.

The first time Tera is there:

Early Wednesday morning I went by car from Buitenzorg to Sindaglaja and there a stony side path (also by car) to a kampong Raraban. From here it is only a short 20 minutes to Tjibodas. (…) 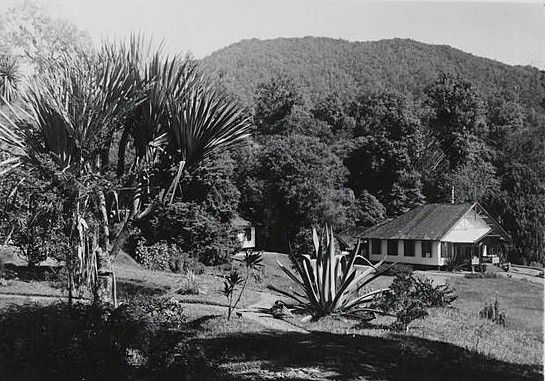 It is really lovely, the pasanggrahan, the laboratory and the home of the hortulanus (see opposite) are situated at the top of some beautiful sloping lawns, on which all kinds of beautiful groups of trees, especially conifers, have been planted. The weather has been fantastic so far, not even a drop of rain.

The first day I strolled to the waterfalls of Tjibeureum, very beautiful and very wet, because with the wind the water evaporated in such a way that you always got a whole spray shower. The catch was good, it is a quiet existence, so that you can go wherever you want with a koelie all to yourself.

Today I marched in the same way to the so-called Huis ten Bosch. This was a pondokje (mountain hut) in the middle of the jungle, 2 hours climbing above Tjibodas. The pondok no longer exists, but the area is very beautiful, with very rich vegetation, only few snails.

The laboratory is simple, but very well equipped. At the moment I work there on my own, but next week Karel the Silent (Dammerman) will also be floundering around there.

In the fall of 1930, elaborate plans are made to celebrate Christmas with the whole bunch atop Tjibodas. There is almost a hitch because in a small community there is of course the necessary bickering.

We were also shocked to hear in the past week that the Went family are also at Tjibodas for Christmas. That is rather annoying, because Frits is a real ninny, has no personal character and everything you tell him is transferred to Utrecht to his dad. His wife is stupid and good-natured and always has the upper hand, because she knows everything; in a word, the most undesirable company to be up there with.

The Frits Went mentioned here is the son of the then prominent professor Frits Went in Utrecht. The scientific world of biologists in the Netherlands is small, everyone knows everyone. Gossip can certainly affect one’s career. So if a son of one of the important professors comes along, there can be a violent reaction.

Ans and Karel, who can be quite explicit  in their statements, wanted to stay at home first, but that is so grossly insulting towards the Went family, you just can’t do that. I then conspired with Maus to talk them out of it and I succeeded, and now we’re going anyway.

So they leave for Tjibodas on December 23 with the whole bunch:

Now the story of Tjibodas, where we had it as excellent as could be. (…) It was quite crowded, with 7 grown people and 2 babies, who could sometimes put on a real squeal.

The procession that left Buitenzorg on the 23rd was very picturesque: one car with Ans, Karel, Carolien and the dogs, and the second with Maus and me and the cook (Bet came 2 days later) Both cars protruding from the barang (luggage), which was transshipped on 10 koelies in Rarahan, while 2 more koelies carried the tandoe (sedan) with Carolien.

In the afternoon we settled in and scribbled around a bit and the next day we made a trip to Tjibeureum. Ans hadn’t completely caught up yet and didn’t make it very far.(..)

We’ve been so incredibly lucky with the weather, blazing sunshine and clear skies and beautiful views, much better than September and October. It is a well-known fact that there is always a short 14-day drought in the middle of the rainy season around New Years, and now we have been fortunate enough to fall right in the middle of it.

(..) The Christmas tree was lit at half past six on the 24th, much admired by old and young alike. Van Woerden (hortulanus Tjibodas) had taken care of it very nicely, it was exactly like  a Dutch Christmas tree amazing in this land without spruce and pine. Finally there was a somewhat noisy, but very entertaining procession around the passanggaran; Ans with Carolien on her arm, Karel with Hansje, Maus and I, each with a dog and behind them Frits and Katrien, singing to the delight of the children.

The 25th Bet came and the 26th she, Maus and I went up to Kandang Badak with three koelies. Here too it was nice and clear, except for a very small rain shower. Still, when it started to get dark, we could still have a nice and warm campfire. The 27th we went up the Gedeh, Bet with a lot of groans and panting, she is walking very badly, but if you give her the time, she will come there in the end. Maus and I walked together very nicely; I’m glad I have no trouble keeping up with such long male legs. The view to the north, to the plain of Batavia and the Java Sea was unsurpassed. You could see Tjibodas very clearly, also the road over the Poentjak and Batavia. But above Soekabouni and South Priangan there was a thick cloud mass with  beautiful moving white fluff. It was almost impossible to leave there. We had breakfast up there and sat in the sun for over an hour, and then descended into the large crater field and walked back to Kandang Badak along the two kawaks. It was nice to see this again, for Bet and Maus it was completely new.

The 29th we descended again and we passed around Tjibodas. And this morning home again, with a rich harvest and many beautiful memories.

With all those trips, rice tables, excursions, balls and more, you would almost forget that Tera mainly went to the Indies to work. More on that next time.