Last time we saw that Tera moved into hotel Dibbets in Buitenzorg, on April 1, 1930. The intention is that she will move to the house of Docters van Leeuwen in mid-May when he leaves for the Netherlands for eight months. And that happens, but first they have to say goodbye properly to Docters van Leeuwen: Yesterday there was a large-scale farewell reception at the house. The front porch was completely lit with lanterns and beautifully decorated with flowers. To R.  had hinted to us on Thursday beforehand that it would be nice if the younger officials of the botanic garden gave some performance. With Lieftinck, Boedijn, Van Steenis and Wife and Koolhaas and Wife, we then put together a performance with great skill, in which we disguised ourselves as goats from the Pangerango mountain (a mountain where Van Leeuwen scrambled  up and down a hundred times) and who had now called a meeting, because they were so happy that that orang blanda, (white man) who always came to disturb their kingdom, was going back to Holland. With lots of fireworks, masks and kains (handkerchiefs) and all kinds of silly verses we had a great success. 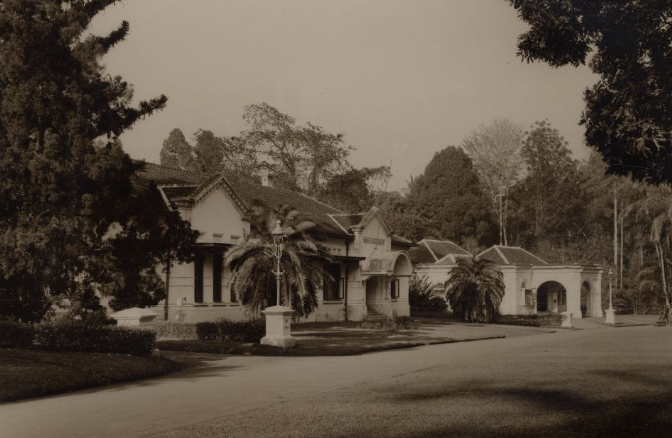 I hereby enclose a postcard (see opposite), which not only shows the Treub laboratory, but also Van Leeuwen’s house. The right building with those arches. At least I get enough space! I may also have the guest room at my disposal, if for example Marius or Nella de Beaufort would come to stay

It seems like a fine plan to me, I do believe that I will get along well with Boedijn and wife. They are not the bickering kind and neither am I. I pay f.160,- per month, only need to keep  my own babu for  15,- per month. It is in any case cheaper than the hotel (in Dibbets I pay f.200,- p.m.) and certainly more pleasant.

Ans Boedijn takes care of the household, that is, she manages the servants. Regularly there is rice table with other biologists, after which games are played all evening. Games are not only board games, but also, for example, playing hide and seek, performing plays and playing blind man. The household is soon renamed “the Boedijn-Jutting firm”. The firm operates with zeal and glee, as always. Ans is an excellent housewife, who really enjoys this big house and the many visits she gets there. She is only a bit worried about Carolien, who eats badly and does not gain weight.

Father Wouter is a bit hesitant in his letters at first about the plan to share a house, but after he has heard good stories in Amsterdam about the Boedijn family, he is “all for it”. Tera does, however, immediately receive extra good advice, to which she does not respond as usual: Now you are certainly already installed in your new environment. I hope you will have pleasant and happy days in it. (..) You should now also try to learn some housekeeping skills from Mrs. Boedijn and, now that you have a temporary permanent home, you probably also have more opportunities for study and to keep abreast of what is happening in the world. Which newspaper do you read?

Now that there is a regular household, there is more structure in the days and there are fixed habits: I always get up at 6 am and go for a walk in the garden at 6:30 am. (On the photo Tera in the garden) It’s still so wonderfully fresh and quiet. At 7 o’clock Karel and I have breakfast, because Ans is usually not done with the baby and herself at that time yet. At 7.30 we disappear to Herbarium and museum respectively. For me it is just a few steps because when I walk out the back door, it is as far as, for example, from Rustoord to the Heerenweg! 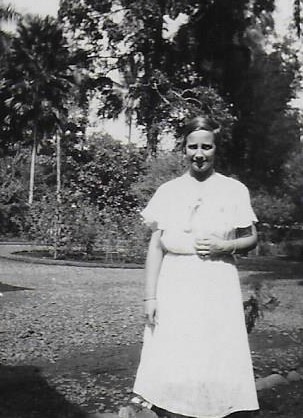 You ask about lunch and whether it is brought into the museum. But we eat that at home at 2 o’clock after working hours, mostly normal European, only on Sundays rice table. In the beginning I thought those hours from 7.30 to 2 a.m. were a bit long, but I am now completely used to it, especially now that we (i.e. Lieftinck and I) have a cup of coffee and biscuits with pisang  at 11 am. Dr. Dammerman doesn’t join us, he is not against us doing it, but does not think it is necessary for himself. As I wrote before, he is always icy frozen in the museum and rarely unwinds. I still don’t understand what that weird mask is.  I’m glad I also know him differently. Sunday he and his wife were here for tea, little Carolien soon sat on his lap and had great fun with his beard!. Then he is an ordinary person and a pleasant guest. (..) We never go back to the office in the afternoon. When we have eaten at 3 o’clock we go to sleep until 4 o’clock or half past 4, then bathe, drink tea, and work at home until 7.30, then dinner, work some more and go to bed. It would be very impractical in Buitenzorg to having to go back to the office in the afternoon, as it always pours uncontrollably. It is still turning, but in the so-called dry season it is not much better.

Every opportunity is taken for a party: Sunday (September 14) it was already 2 years ago that the Boedijns arrived on Java, and 1 year from Lieftinck and 7 months from me.  We thought it a good opportunity to celebrate (especially that anniversary of mine was very unimportant) and had a nice dinner party with To R. and the van Slootens attending.

In November 1930 they receive a visit from the Netherlands as Jac. P. Thijsse comes to visit with his wife: On Saturday evening, the five of us: Karel, Ans, Betje, Maus and I were asked to dine at the Dammerman family in honor of Thijsse and Madame.. It was, as usual, very tasty, and surprisingly enjoyable. The host was on a roll. He talked more than usual in a whole week! With all that fun it was getting late, Ans and Betje went home in a deleman (donkey cart), but I went for a walk with Karel and Maus, it was a lovely fresh evening with beautiful stars.

Monday morning Thijsse came to visit us in the museum. He really enjoys it here, which is not surprising. When they were in Tjibodas they both (Thijsse 65 years, Mrs. 64) walked all the way up  to the crater of the Gedeh. That’s quite an achievement! I hope I can still do that at 65!

When Thijsse is back in the Netherlands, he reports to the family van Benthem Jutting in Haarlem. That immediately gives father Wouter reason to scold: You just have to be careful not to gain too much weight, because according to Dr. Thijsse, who spoke to Ans briefly at school, you have increased in size; take care of your figure!

The Dutch holidays are celebrated exuberantly: Sinterklaas already came out for Carolien in the afternoon, she was overjoyed with her treasures and babbled with delight in her own little language. She can say mooi, mooi (beautiful, beautiful) very well. It does sound more like moi, moi, but she uses it well when she thinks something is beautiful.

Betje and Maus came at 7 o’clock, we ate, among other things, chestnuts and lots of sweets like puff pastry with almond paste and spiced biscuits. Bet and Maus and I had written endless poems that went very well. Karel and Ans gave me a nice bird book, a book and a letter opener  from Betje, a snapshot of Carolien in a frame from To, a box of sweets from Aunt Jans and a very nice box of Japanese lacquer from the Dammerman family. Boedijn was delighted with the booklet: Amsterdam black on white, which you bought for me at the time, he has already read it 3 times and now it is doing the rounds with the others.

Next week  we’ll go into the mountains and celebrate Christmas in the tropics.