Last week we saw that Tera started her work at the Zoological museum. She spends her free time exploring her surroundings. Her bike has been put back together and she explores Buitenzorg and the immediate surroundings on her bike: I cycled with Betje Polak along the “Vecht”, which here indicates a nice path along a half-canalized river along kampongs. Then we ended up in the so-called culture garden of the botanic garden, where all kinds of cultivated plants can be seen. This is a long way from the actual botanic garden, I hadn’t been there yet. And finally we went for a swim.

Almost every weekend they go on an excursion into nature.

For example, she and Betje Polak set off for a few days in mid-June 1930. Two women and a few koelies (Indian porters): Early Friday morning we went by car (with driver) to Tjisoeroepan, rented 4 koelies there and strolled up the Papandajan (volcano). It is a beautiful, but steep path. With taking pictures and catching animals along the way, we had an interesting day, but it also took us 6 hours to get to the top, while 4 hours is normal!

The last part went through the crater, which is very active and where we saw all kinds of nice spray wells and holes. The dangerous parts are fenced and if you just keep the indicated paths, you can get everywhere unscathed without a guide. From the crater we had to go up a long way to the Pasanggrahan (mountain hut) of the Volcanic Service where we had received permission to stay. Betje and I stayed on the mountain all Saturday and made a nice trip in the morning and in the afternoon through a few old extinguished crater valleys, which are now full of beautiful flowers. It was really cool at 2500 meters and very dry. Nearly freezing at night, namely 5 C and the water icy cold, so you didn’t even think about mandie! (Mandien is throwing water over yourself with wooden buckets, the way of bathing in the Indies) It reminded me too much of a Dutch winter to be pleasant. We each slept under 4 molton blankets and a nice wood fire burned in the fireplace all day! It’s a neat pondok (hut) and we had a good time there. A mandur (overseer, butler) takes care of the household and his wife cooks. Sunday morning we descended quickly, were able to change clothes in Garut and had something to eat and were back at 7 o’clock.

However, they usually go out with a bunch of people. The aim is not only to relax and enjoy nature, but also to collect scientific specimens, shells, snails, insects and soil samples.

The trip to the Patuha was a success. There were 15 people and Saturday morning the troop left in a large minibus. It was a long drive, which became even longer, because the bus turned out to be unable to handle the slopes. Then the 10 men were asked to get out to help push. At 5 o’clock we were at the camping site, beautifully situated on a large lake, Telaga Patengan. The group was housed in four tents. I thought it was funny to camp again and to experience the difficulties and peculiarities of it in the Indies. 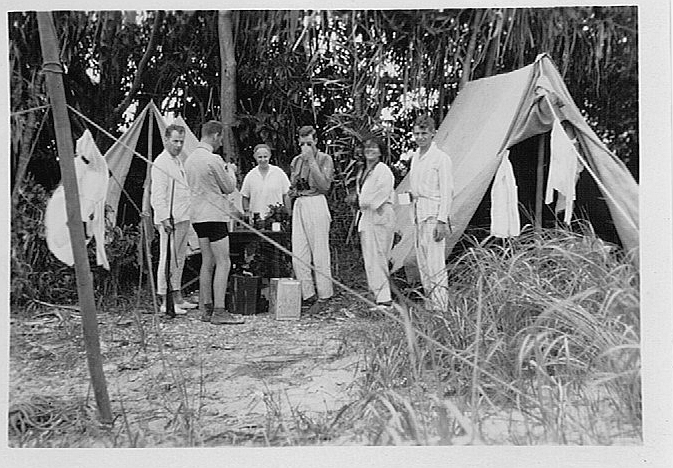 Or they go to one of the coral islands such as Dapoer where six of them camp for a long weekend on the uninhabited island and a huge amount of luggage including 3 tents, 6 camp beds, kitchen and eating utensils, collectibles and water, because there is no fresh water on Dapoer.

It was about 2 hours sailing and there was quite a swell, so that Betje, Kees and Maus became seasick. It was a comical sight when all three of them hung overboard and Karel, Jan and I each had a sufferer by the belt to prevent them from falling overboard. Unfortunately only 3 people had fun and 3 didn’t.

Dapoer is small, a bit overgrown, so we had enough shade. The kitchen was even a very idyllic spot, where we had  a lot of discussion about all kinds of issues of coral island formation and other sea matters. Especially in the evening with gasoline lamps it was fantastic. During the day we spent most of the day in the sea to study the coral gardens with the well-known sea binoculars. 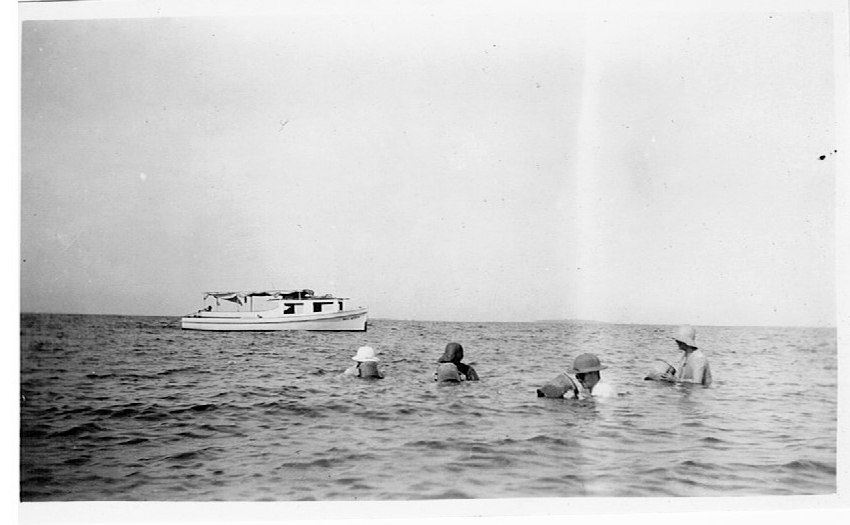 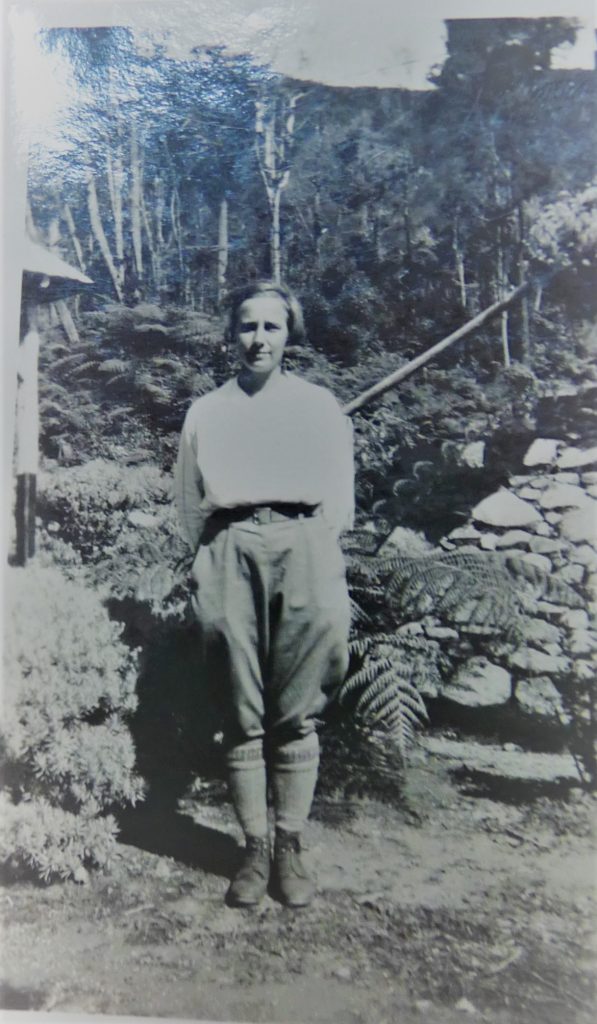 It is not always easy as a woman to go out with others. Of course, morals demand that there be a tent for the lady(s) and if you send a snapshot home, your father may also be unpleasantly surprised when he responds: I don’t admire your pose in the photo on the top of the Gedeh; I’ll keep this shot for my private collection. However, let me warn you against sitting in such a pose without skirts, at least prevent anyone to take your photo in such a pose. You run the risk of losing the respect of your colleagues and them to joke about you. I have always praised you that, despite your study of natural history, you are not a follower of a few colleagues who believe that they should  behave and dress like wild men and I hope that I can continue to testify this of you. Be a woman, and give no offense, by adopting such an unabashedly ungainly pose. Not wearing skirts in the mountains is okay. That photo has not been preserved, but here is one with Tera in trousers.

Tera comments in her own way in her letters to father about her traveling companions: Betje is enormously pleasant on such journeys, only very slow and clumsy. She was very angry that someone in Buitenzorg had recently claimed that she should always have a baboe (Indies personal servant) running behind her, but it is really necessary!

Her male colleagues are sometimes unsure or unable to behave properly towards a woman or sometimes apparently go too far: Van Leeuwen has been telling a series of stories in the camp, some of them rather unseemly. Maus says that if I hadn’t been there, Van L. would have been telling dirty jokes 24 hours a day! Vader answers rather dismissively, in the manner of gentlemen of position: It is a pity that someone like Docters van Leeuwen cannot help but tell ambiguous jokes, even in the presence of ladies. How annoying this will be for his wife when he is at home. MeToo avant la lettre.

The next time Tera moves to the house of Docters van Leeuwen with the Boedijn family.