.After her first steps on East Indies soil, Tera now really has to get to work.

She starts her work at the Zoological Museum (see image below) in the Botanic Garden, which in her view could be much better organized, but she finds it too pedantic to give advice for improvement immediately in her first week. 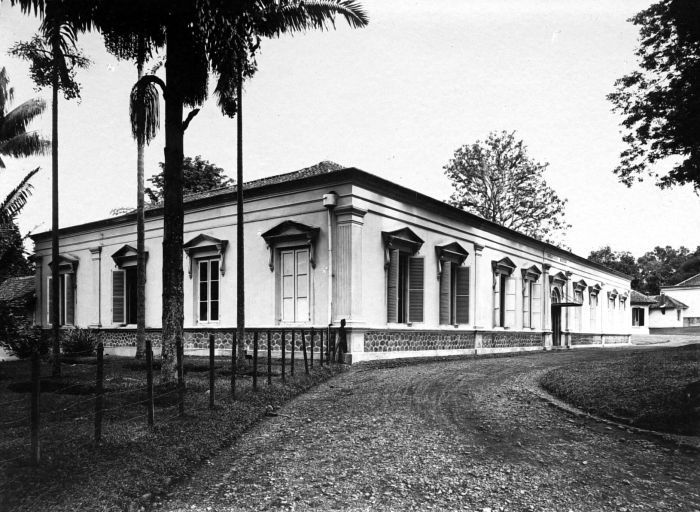 The work in the museum began on the 4th of March. I have a hall-shaped room. My little cubicle in Amsterdam is about a sixth of it. I was also assigned a boy called Sonep who fortunately understands a little Dutch. Now I’m covered in shells again and that gives me a very familiar feeling. The work is about the same as in Amsterdam, except that I am of course only a curator here and not what de Beaufort always calls 1st officer on board, because I also knew the whole state of affairs in the museum there. Dammerman does this all himself here, and as he works in another wing of the building, Lieftinck and I notice relatively little of him, unless he comes to us or we go to him. There are all kinds of things that could be arranged more practically: labels, glassware, bottle caps, etc., but I cannot immediately advise on change, that is of course much too cocky. Conversely, there are also handy inventions, which mainly aim to keep out moisture and rust. Because what can become moldy becomes moldy and the rest rusts. It’s a humid place. Much cooler than Batavia, especially in the evening.

The invertebrates section she will be responsible for is a mess, she says, but she also thinks she can make a good whole of it in a year’s time. There is a lot to do in the museum because the invertebrates are very neglected, I am used to dirty messes. The Museum is small, much smaller than Amsterdam, I can probably easily get those invertebrates ready in that year that I stay here. By ready she means systematically identified, labeled, stored and described. It will appear optimistic that it will take her a year, also because she will regularly bring new shells and snails to the museum

There are already some acquaintances of her in India. Karel Boedijn (1893-1964) studied in Amsterdam at the same time as Tera. He is a botanist and specialized in fungi. He left for the Indies in 1925 and has been working at the ‘s Lands Botanical Garden since 1928. Karel, also called Ka is married to Ans. Maus (Maurits) Lieftinck (1904-1985) also knows Tera from Amsterdam. Maus also works at the Zoological Museum. He’s the one who initially shows her around.

Jan de Jong (1895-1972) is a zoologist she also knows from Amsterdam. She worked with him in the Naardermeer project and after his PhD in 1925 it was Tera who, together with Non Scheffer, provided the poems and songs. Finally, there is also Betje Polak (1901-1980), who also worked with Tera on the mapping of the Naardermeer. Betje also studied in Amsterdam and obtained her doctorate in 1929 and then left for the Indies. Betje is a botanist and mainly conducts research into the origin and composition of peat. She hangs out with all these people, they dine together, go to shows and on excursions. Also, unlike in Amsterdam, there are more people of Tera’s own age.

In addition to work, a few things have to be arranged first. Her finances; she receives a salary of fl. 500 per month (net). Father writes: Your monthly salary is therefore, as you expected, f 500,- and without any rebate, what is only proper, because here during your leave you have to pay 15 ½ % of your salary, which you do not receive, as the the municipality of A’dam starts from the principle that it does not want to invest anything for a non-active civil servant on the contribution to the Algemeen Burgerlijk Pensioenfonds, (pension fund) which contribution amounts to 15 ½ % of each salary, but of which the municipality for active civil servants pays  8%.

Even in 1930 the official rules were already inscrutable. According to the CBS (Central Bureau of Statistics), a salary of fl. 500 in 1930 corresponds to approximately € 4,500 in today’s currency. However, comparing money and value over a longer period of time is always a complicated matter. Housing and labor were significantly cheaper in 1930, while clothing and food were more expensive. Tera finds life in Buitenzorg on the expensive side: Buitenzorg is very expensive, a loaf of bread costs 30 cents, a glass of squash in a restaurant 60 cents! Swimming pool membership f. 2.50 per month! However, since this is a fresh and healthy activity, I accepted it. It is a military swimming facility, but it may also be used by civilians.

A quick internet search makes it plausible that in 1930 a loaf of bread in the Indies was indeed almost twice as expensive as in the Netherlands, of course the flour had to be imported.

Since Tera will stay for a year, housing must also be arranged. At first she stays with Dammerman, but that is not a long term solution: I had an extensive discussion with Mrs. Dammerman about my definitive housing. In May, Doctors van Leeuwen will go to Holland for 8 months. However, his sister-in-law remains here. Now, according to the rules, Dammerman should move to that house for the duration as it comes with the job. But they don’t feel like it, because they have a lovely house themselves. He is allowed to rent it out and now it could be arranged in such a way that Boedijn and wife and child and I live in the main building together and Ms. Reijnvaan in  the pavilion. The Boedijns have to move anyway and want to move into Van Leeuwen’s house for 8 months and only then look for a permanent home. They would then have the series of rooms to the right of the inner gallery and I to the left consisting of a sitting room and a bedroom and a sort of trunk room. I have to look at the actual situation in more detail, the negotiations are not yet finished !

Then I am a kind of Paying Guest at a contribution of 175 per month, Mrs. Boedijn would run the household for the three of us (it is possible that Mrs. Reijnvaan eats with us) and then I don’t have to bother myself with all the fuss of a household and servants. It seems tempting to me. Also because I would live close to the museum and can sit in the garden as much as I want. But, as said, this is not yet settled and I will be careful not to make stupid agreements. The other weeks, about 6 weeks before Van Leeuwen’s departure and 6 after his return, I have to live in a hotel, either hotel Bellevue or hotel Dibbets, both quite expensive.

And so it is eventually agreed, but first six weeks to a hotel; 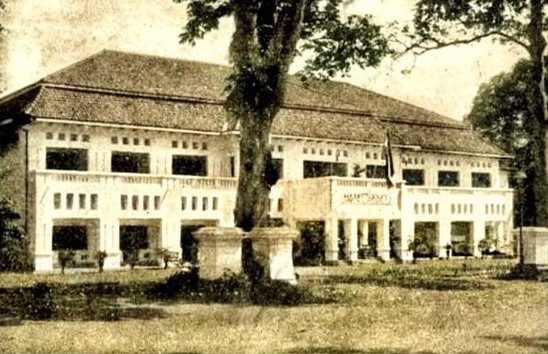 Since April 1, I am now in hotel Dibbets. (see image on the left) (..) I have now started working hard. Further swimming on Thursday, Friday and Saturday of every week (the first three days a week it is for soldiers) and very often De Jong or Betje Polak or To R. or Lieftinck come to have a chat.

D. van der Goot (Holstijn’s cousin) also lives there, and a young man Hagen, 3rd Hortulanus to the garden. Furthermore many single young men and some female teachers. The dining room is an idiotic sight with all those one-man tables. I now also have a babu named Ini, with whom I try to speak a strange kind of language. It gets better every day and she tries very hard to understand me. It’s touching how committed those people are. She sews neatly and also does the shopping and of course she is there for washing, ironing and keeping the room clean.

Having arranged that, she can go to Bandung during Easter to visit acquaintances. On the Princess’s birthday, April 30, she can go to the party at the Governor General’s palace with all the civil servants: By 9 o’clock in the evening, Dr. and mrs. Dammerman with Lieftinck picked me up for the reception at the palace. Whole wagonloads of people were unloaded and through numerous rooms with portraits of previous G.G.s we arrived at the reception room, where many guests had already gathered. It is an elongated hall, marble floor and white pillars, with benches and chairs along the walls and decorated with palms. Those pillars were apparently extra whitewashed for the occasion, so that many a gentleman was freshly powdered on his black suit! (…) There was not too much company, mainly the whole village of Buitenzorg. I had thought that some high officials would also come from Batavia and Bandung, but this was not the case. However, the regent and the Raden Ajoe and some native dignities did attend. Most were older people, so that there was relatively little dancing. I still had quite a few friends, except Lieftinck, among others Voute, Koolhaas and wife, Bezemer, To Reijnvaan and I danced along well. It was “very dignified”, quite different from that rushing  and flying on board. Also no ugly Jazz band music.

More East Indies adventures in the next blog.