Yesterday the blog about Tera and Anna Weber came online. That was planned for a later date, but even I can make mistakes.

Earlier we saw Tera starting her work at the Zoological Museum in 1921. Her first task is to organize the Schepman collection. But before she starts, she is also roped into another project.

On August 11, 1920 Tera writes in her diary: Visit from Redeke, comes to persuade me to join the Zuiderzee research and if I say yes I can come sailing  from September 8-11. Wouldn’t you kill for that. I am really going to do that!

Heinrich Carl Redeke (1873-1945) studied biology in Amsterdam and obtained his doctorate in 1898 from Max Weber. When Tera meets him in 1920, he is a hydrobiologist and director of the Zoological Station in Den Helder. That Zoological Station was set up by the Dutch Zoological Society (NDV) of which Redeke is a board member. Tera is also a member of the Zoological Society. From 1903, Redeke was in charge of the National Institute for Sea Research, which shifted research to freshwater during the First World War. With the help of a floating laboratory, numerous investigations were carried out in the interest of inland fisheries. Redeke is married and has four children. He has his own inland vessel, “de Meerval”.

The Zuiderzee was a Dutch inland sea created in the warm period between 800 and 1200, which caused the sea level of the North Sea to rise and a large inlet was created between present-day North Holland (formerly West Friesland) and Friesland and Overijssel. There have been plans to reclaim the Zuiderzee since the 17th century. On the one hand it was about the safety of the population, there were storm surges with great regularity. On the other hand, they wanted more agricultural land for food supply. Technically, closure only became feasible from the 19th century. In 1886 the Zuiderzee Association was founded. They hired the engineer Mr. Lely to come up with a plan for the reclamation of the Zuiderzee. From 1913 Mr. Lely was a minister and tried to convince parliament of his plans.

In January 1916 there was another major storm surge in which large parts of North Holland and Utrecht were under water for months and dozens were killed. In the winter of 1917-1918 there was a famine among the workers of Amsterdam because the potato supply from Germany had stagnated as a result of the First World War. That made the time ripe for action and in 1918 the Zuiderzee Act was passed. . This law provided for the closure of the Zuiderzee and its partial reclamation. Broadly speaking, this concerns the Wieringermeerpolder, the Noordoostpolder and Flevoland and of course the Afsluitdijk. Before the actual closure was started, the idea arose to map the fauna of the Zuiderzee and to see to what extent changes in fauna occur when the water became first brackish and then fresh when the Zuiderzee becomes the IJsselmeer. There are regular research trips leaving from the Zoological Station in Den Helder. Tera joins one for the first time on September 8, 1920:

9 o’clock sailing with Geertje de Lint and Hofker, the V.I. II steamed out of the harbour, past Wieringen There first sighting. Beautiful quiet weather, not completely clear. Nice captain (van der Ploeg) and very kind crew. Neat lab on board….. Stay overnight in Stavoren, little nest, a bit boring! There is fishing and trawling (trawling is sweeping along the bottom with a trawl net to see what’s on the bottom). Sometimes Tera is the only woman on board, but that doesn’t seem to bother her. 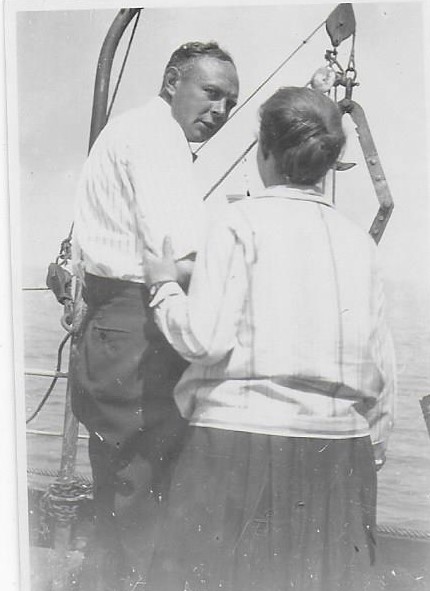 On September 10, Redeke comes on board. Tera writes: Departed at half past seven. Now with the boss on board there was a completely different mood. Still, he’s a sturdy chap and I’m getting more and more respect for him. .. today just some trawling. May hold the steering wheel  between Medemblik and Wieringen. ….. We entered the harbor and said goodbye to the captain. The catch was preserved in the lab. Afterwards we drank tea on the Meerval in the inner harbor.

Photo: Redeke on board with Tera (seen from behind) 1920

.Construction of the Afsluitdijk started in 1927, which will eventually be completed in 1932. The Zuiderzee will thus be split into the current Waddenzee and the IJsselmeer. 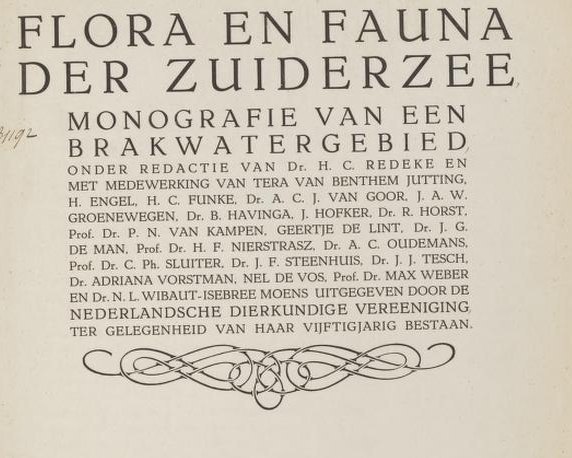 Since 1920 Tera has regularly worked on mapping the mollusks of the Zuiderzee. With this Tera has immediately acquired herself a place in the Netherlands as an expert on mollusks. Because of her open attitude and her hands on mentality as she calls it, she also makes herself popular with the crew.

She does however want to maintain a respectable distance between herself and the people she works with. March 4, 1922: With Redeke. over coffee, endless stories about all sorts of things, mostly Zuiderzee beasts, very useful. Afterwards he asks if we should call each other by our first name  Why? I don’t think it’s necessary.

Being so informal and on a first name basis, and that with a man who is more than twenty-five her senior, no, young Tera doesn’t like that.

Years later, in 1943, when she sets sail again on the Zuiderzee and stands on the quay in Hoorn, the old crew members still remember her: “Tuesday via Hoorn to Enkhuizen. In Hoorn we had to take some luggage and an extra sailor. Half the crew of the inspection vessel we used to sail with, stood on the quay: Good day, Miss Tera! Shaking a lot of hands and chatting, very entertaining.”

Next time we will see that there are even more plans. Tera becomes involved in the Naardermeer research.