As we’ve seen in the previous blog, Tera is involved in mapping the Fauna of the Zuiderzee. However, she is also asked to participate in the Naardermeer project.

The Naardermeer is a nature reserve on the northwestern border of ‘t Gooi, east of Amsterdam. At the beginning of the 17th century, the lake was drained, but in 1629 it was flooded again to stop the Spanish troops advancing towards Amsterdam.

At the end of the 19th century, Amsterdam grew rapidly. That caused problems with waste. To solve this problem, Amsterdam wanted to drain the Naardermeer and use it as a garbage dump for the expanding city. There was a lot of opposition to this plan because the area had meanwhile been discovered by nature lovers as a breeding ground for birds. Important opponents of the Amsterdam idea were Jac. P. Thijsse and Eli Heimans who founded the Natuurmonumenten association (monuments of Nature) in 1905 with the special purpose of buying the Naardermeer. Shortly after the association was founded in 1905, Thijsse wrote: Our first appeal for members and support had had a rather poor result. Very good people called our design a fantasy. Of the circulars we sent to the members of parliament and to various high-ranking government officials, less than half a dozen came back with an application for membership or donorship. But we did not despair.

Even then, nature was not the most important topic on the political and economic agenda. Eighteen months after the foundation of Natuurmonumenten, the Naardermeer was purchased for fl. 155,000. The loan was repaid with proceeds from fishing, hunting and reed cutting. The area was ideal for field excursions from the university, precisely because it was close to Amsterdam. For example, Tera writes on June 8, 1921: With Wicher, Atie and Nel all day in the Naardermeer. We had  nice rowing and saw spoonbills and stern colony with eggs and young…..a lot of dragonflies, which were much too quick to catch with the good weather, I fished plankton and spoke with Thijsse

In 1923, the Natuurmonumenten foundation came up with the idea to map the entire flora and fauna of the Naardermeer. On March 24, 1923 there is a meeting about the Naardermeer. Tera writes: Meeting in the Herengracht building at 11 am Naardermeer. Not bad in a beautifully decorated room. Whole plan discussed in detail. All sides: the scientific, the financial, the practical, very extensively discussed. On April 14, the whole gang: Thijsse, Tienhoven, Stomps, Beaufort, Heimans, Sleen, Engel, de Jong, Boedijn, Müller, Stien Buisman, de Vries, Betje Polak and I will enter the Meer. That will be a nice outing.

Pieter van Tienhoven (1875-1953) studied law and was director of an insurance company. He was also a great nature lover. When the Natuurmonumenten association was founded, he was asked to become treasurer. In 1927 he would become chairman. He regularly comes to visit in the museum. The advantage is that he has a car and is quite willing to drive the young students around. We will meet Karel Boedijn and Betje Polak later on. 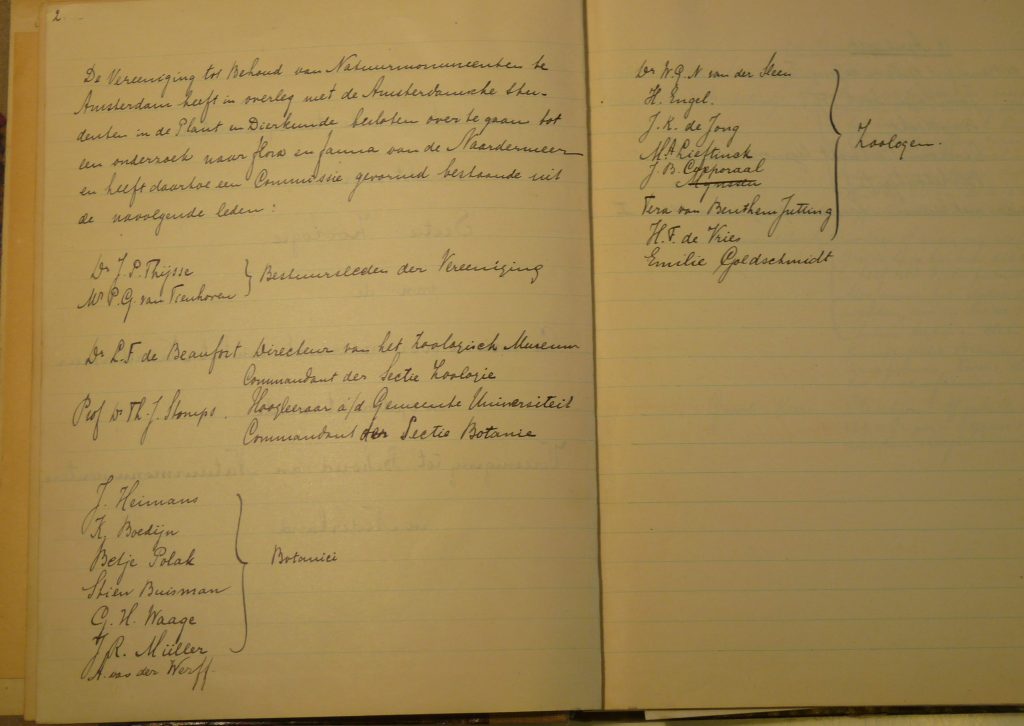 In the logbook of the project it is stated on page one: The association for the conservation of natural monuments in Amsterdam, in consultation with the Amsterdam students of Botany and Zoology, has decided to proceed with research into the flora and fauna of the Naardermeer and has set up a committee for this purpose. composed of the following members. Dr J.P. Thijsse and P. van Tienhoven (board members of the association) Dr. L.F. de Beaufort (director of the Zoological Museum, commander of the zoology section and Prof. Dr. Th. Stomps (professor at the Municipal University, commander of the botany section) and the following students……

The logbook of the Naardermeer project can be found in the Amsterdam City Archives. Each time, the catches, the locations, the weather conditions and all remarkable details are carefully noted. 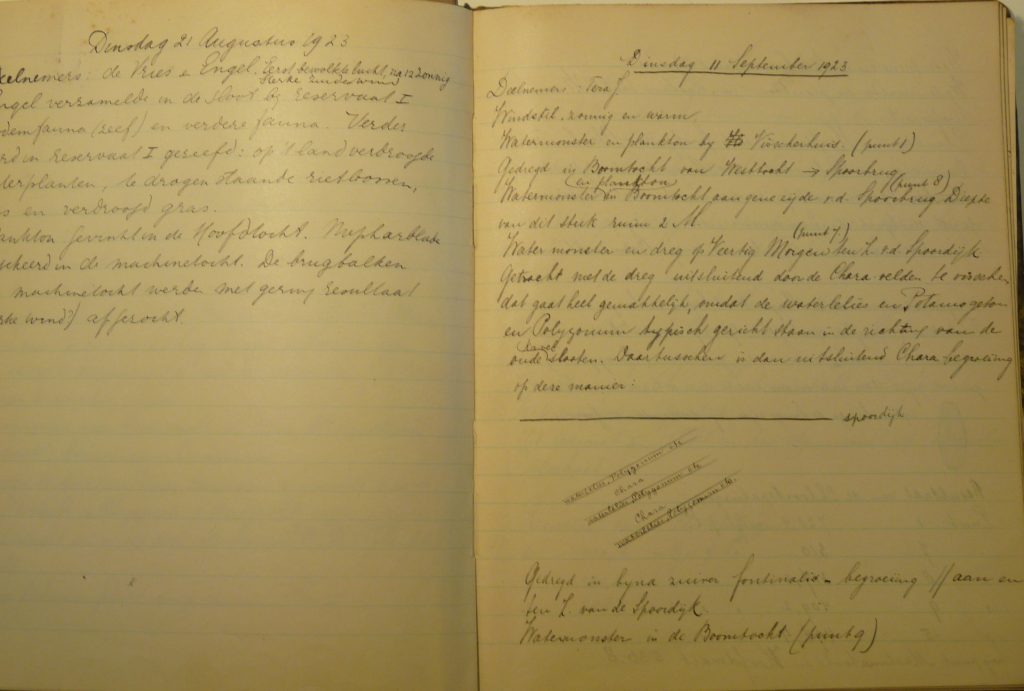 The project is thoroughly approached, both zoologists and botanists are involved, and every free moment someone goes to the Naardermeer, as for example in September 1923 of which the logbook is shown above. In her diary, Tera writes: So me going out on my own on the Naardermeer, to get water samples and eat many, many blackberries. Much reed has already been cut, and shipping has been busy. Water level low. The rope of the plankton trap is slimy. Rather difficult to take care of navigation and to practice science at the same time when you’re on your own.

Or in November 1923: With Sleen and Sally Baruch to Naardermeer. Willem Barendtz expedition is nothing compared to that. Most canals and smaller ditches  are frozen over. All but 2 water samples were collected, we fished plankton  a few times and dredged once. icy! 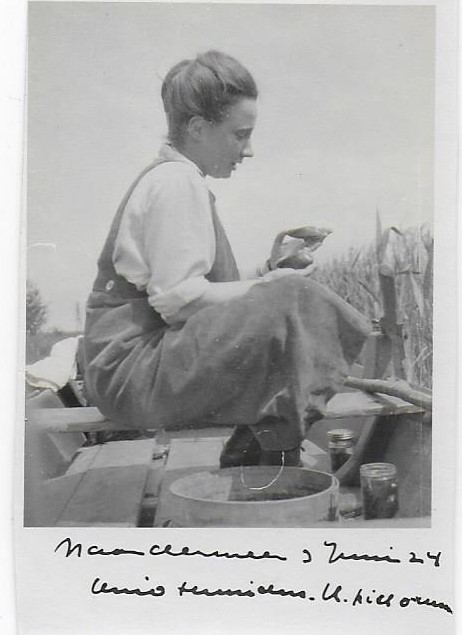 Every now and then it is exuberant like in June 1924: Toured with Baasje, B. de Haan and Emilie Naardermeer. We took a quick  look everywhere and experimented with the big dredge, it goes well, but the catch is far too large for us to handle. Large-scale experiment under the railway bridge. Emilie and I entered the water and did a trek with difficulty. Rich harvest. Crazy party, the boys in shirtsleeves and us in swimsuits. Bierens de H. and Emilie have each other’s hats on, which looks very good. Boss has very wet pants. We sometimes laugh ourselves silly about our little vagabond troop.

Meetings are held regularly; Semi-annual meeting Natuurmonumenten Naardermeer research. Had dinner at Polman’s beforehand with Thijsse, Tienhoven, Drijver, Emilie, Sleen, Baasje and me. Thijsse advises that the committee should speak up and that we make ourselves heard more. Meeting very animated, very good to see everyone again. All departments report. (Polman is a well-known restaurant on Dam Square in Amsterdam).

Next time we will get to know Bierens de H. or B. de Haan further.  That is Johannes Bierens de Haan.