In the previous blog we saw how Tera went to work in the Zoological Museum and helped furnish the Heimansdiorama.

In addition to all that work, there is the family, and that can sometimes be a hassle. The Van Benthem Jutting clan is small, which means that everyone knows each other and of course also interferes with each other.

To begin with, there is father Wouter (1851-1933), a former judge at the court in Batavia. A stately gentleman, I imagine him with a walking stick and top hat, and in any case with a moustache. Since the death of his wife in 1915, Wouter has lived with his daughter at the Wilhelmina Park in Haarlem, assisted by a housekeeper. But after 1924 his daughter is graduated and his son got married. 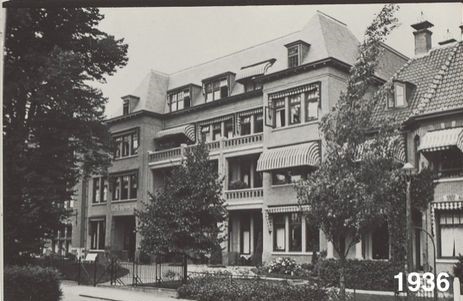 Wouter is almost seventy-five and decides to move into Rustoord (see the photo on the left) at the chic Westerhoutpark. He has a sitting room and a bedroom there. Downstairs is a dining room that he can share with other residents, all meals are included.

And there are music evenings and bingo nights. There is a well-equipped bathroom on the landing that he shares with other residents. The rest home is modernly equipped with central heating and an elevator, quit a novelty in the nineteen twenties. He soon makes friends there.

This does mean that Tera has to find another place to live. She finds this at a landlady, Mrs. van den Broeck, on the Leidse Vaart in Haarlem. She will reside there with room and board . Mrs. van den Broeck takes care of her meals and the washing; she pays ninety guilders a month, including food, gas, electricity and water. If she has someone visiting, for example for a coffee visit, the landlady asks an extra guilder. That visit should of course not consist of gentlemen.

Then you have brother Marius (1888-1945). As we saw in an earlier blog, Marius got married in 1916, and in 1924 his third child was born. The nephews Wout and little Chris and the niece Mien regularly visit the garden (as Artis is called) and are shown around by Tera. As in 1923 when she writes: Ans, Vader and Wouter in the garden, the boy love it and thinks the elephants and turtles are the most beautiful. The boy is five years old here.

In the summer Marius often rents a house in Domburg with his wife and children and father and Tera, the Zeeland family ties are still strong. In Middelburg, cousin Jaap (1879-1967) and cousin Mies (1876-1928) run the bookshop. Tera cycles with cousin Jaap along the dunes from Domburg to West Kapelle, she goes with her nephews and niece to look for shells on the beach. Like in 1925: With Jaap to the ring steken in Oostkapelle. nice colorful and floral decoration. (..) Nice cycle over Westhove and Berkenbosch. Busy with farmers and peasant women, all in traditional costume. Babbelaars bought from mrs. Rooze. Ring steken is a traditional Zeeland sport where the farmhands sit on horses with no saddles and try to catch a very small ring (about 3 cm. in diameter) that hangs on a cord by driving a lance trough it. Babbelaars are a Zeeland sweet with cream, butter and sugar.

That the Zeeland ties are strong is also apparent from Tera’s entry into the Zeeland Society of Sciences in 1927. At the Zeeland Society she meets Brakman. Cornelis Brakman (1879-1955) was Head of the primary school in Nieuw en St. Joosland and amateur malacologist. He was also curator of the Zeeuws museum, part of the Zeeland society of sciences: in the afternoon I visited Brakman in Nieuwland. Nice simple nice man who tells a lot, and has a lot to ask. His wife is still in Nieuwland’s costume. Watched the whale he caught a year ago (..). Brakman takes me on my way to Middelburg and then I cycle in one go to Domburg in 45 minutes.

Rika Ghijsen, a good friend of Tera, also lives in Zeeland. Hendrika Ghijsen (1884-1976) is almost related; her mother was the sister of Suze Proos, Wouter’s first wife. Rika studied Dutch literature and history and obtained her doctorate on the life of Betje Wolff, who was born in Walcheren. Later on, Rika will become interested in Zeeland dialects. She lives on the family estate in Domburg and remains good friends with Tera until her death. We will definitely meet Rika later.

In the second half of the twenties there are a number of sad and happy developments in the family. We have already seen that Marius is sent to the Indies in 1928. It seems that because of his homosexuality, he got into trouble in the Netherlands. To avoid persecution, which would of course be a scandal, he probably emigrated to the Indies. We meet Marius later.

In 1926, cousin Christiaan (1878-1947), a former captain on the high seas to the Indies, became acquainted with a lady. Christiaan is already 48 and never married, it is talked about in the family. Especially if he gets engaged and the lady in question turns out to be a divorced woman with child. Tera writes: with father and Pico to Bussum on October 10, to find out about the new cousin Chris is engaged to. Pico is cousin Pico Pilaar – van Benthem Jutting. A marriage also means that Aunt Marie (1857-1947), the youngest sister of father Wouter, has to move. She lives with Christiaan and is now sent to a boarding house for old ladies. Marie has cared for her eldest brother’s children since she was 24 after their mother died in childbirth. Now she is 69 and she is being discarded. Wouter is “not amused” but can do little about it. This cousin Christiaan will be my grandfather. In my book Twee Levens, Een Liefde, you can read more about this story (unfortunately not available in English).

Besides all that, a lot is also happening in Zeeland. Cousin Mies has been struggling with her health since 1924. Cousin Jaap takes care of the bookshop alone while she is staying in a villa in Domburg. The family is concerned, a nurse is hired. Mies herself hopes to recover, and to take a cure on the Côte d’Azur. At times she seems to get better,  but eventually she dies on April 10, 1928, only 51 years old, probably from tuberculosis.

Only two months after Mies’s funeral, cousin Jaap marries the young nurse in question, Ada Went (1900-1996). Ada is then 27, Jaap more than 20 years older. They will have a long and happy marriage.

On the photo you see the newly weds on the left. The older man with moustache in the middle is Wouter, on the right The brides father, aunt Marie, Cousin Christiaan and wife, and further family of the bride and the housekeeper in traditional Costume.

Jaap and Ada run the bookshop in Middelburg until his retirement, after which the business is sold. Until the 1980s, the van Benthem & Jutting bookshop will stay a well-known  name in Zeeland and far beyond. Ada van Benthem Jutting, daughter of Jaap and Ada has written a beautiful book about it. (also not available in English)

More private business from Tera next time.  We will see some  romantic adventures that have more impact.