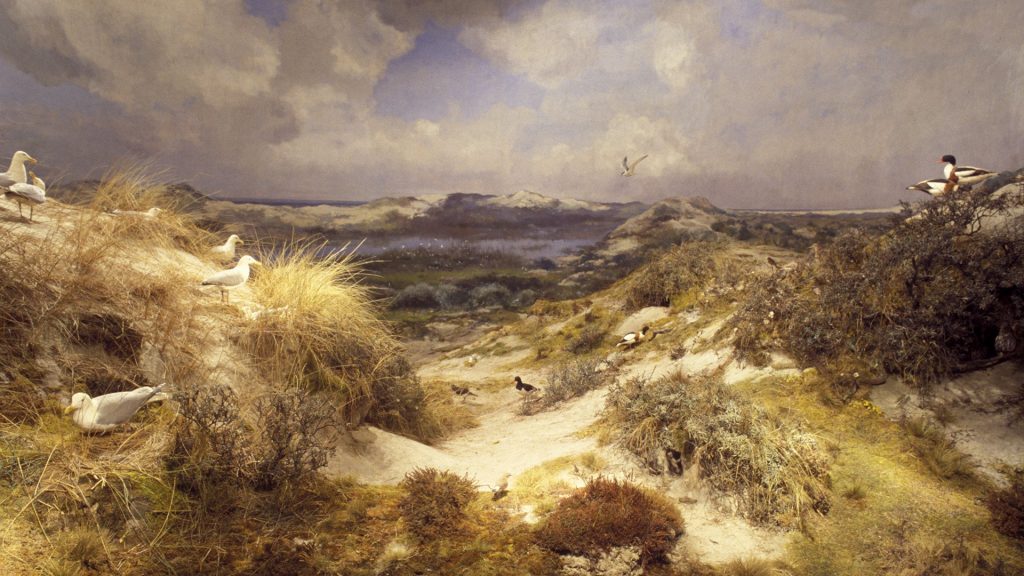 Now that Tera has graduated, she is seriously put to work in the museum. In addition to maintaining the collection, she is involved in organizing exhibitions.

Eli Heimans (1861-1914) was a Dutch primary school teacher and nature lover. Together with Jac. P. Thijsse, he was at the basis of natural history education in the Netherlands. Also with Jac. P. Thijsse he was the co-founder of the magazine “De Levende Natuur” (Living Nature) that wanted to inspire children and young people to look at nature. In 1901 Heimans was one of the founders of the Dutch Natural History Association. On an excursion to Germany in the summer of 1914, Heimans died suddenly at the age of 53. After this sudden and unexpected death, Jac. P. Thijsse and Coenraad Kerbert founded the Heimans Foundation with the aim of ‘promoting the study of nature, especially among the youth’. The plan was to make Heiman’s dream come true; namely the founding of a ‘People’s Museum of Natural History’ after the English example of the Natural History Museum in London. The plans were put on hold by the First World War. After the war it became known that Artis had similar plans for the expansion of the Zoological Museum. Moreover, it turned out that the donations received did not meet expectations, so a decision was made to use the available capital to furnish a ‘Heimans diorama’ in the Zoological Museum in the Artis Aquarium building.

Paul Steenhuizen, the taxidermist of Artis, was commissioned in 1923 to build the diorama. Tera is also involved in designing the diorama: On February 3, 1924, Tera writes: Went for a stroll with Ada in the dunes to measure willow branches for planting in the diorama. The entire diorama has to be recreated to the correct scale and is decorated with scientific precision. Geologists, ornithologists and entomologists, as well as botanists, are involved in the design. On June 16, 1924, Tera’s diary reads: Baasje with Steenhuizen and Jansen clandestinely in the Zwanenwater and from there to Texel, to see dune landscapes for the diorama. They have nice weather. The Jansen mentioned is the painter Willem Jansen (1871-1949) who will paint the back canvas of the diorama of 28 meters wide and 9 meters high. The Texel dune landscape is used as an example for the diorama. At the opening Jacob Heimans, Eli’s son, notes somewhat sarcastically that his father had never been to Texel.

In 1926 the Natural History Association will be celebrating its 25th anniversary and since Heimans was one of the founders, it was decided to link the large Biology Exhibition in honor of that anniversary,  to the opening of the Heimansdiorama. More than a year of preparation precedes this: Van der Sleen comes to discuss the exhibition with Beaufort and Kerbert. Sleen wants me to be secretary of the general committee. I don’t really feel like it, but I’ll be able to learn a lot from it. But before I say yes, Baasje has to agree unconditionally.

The opening of the exhibition and the Heimans diorama was widely reported in the newspapers of May 1926. Tera is busy with that; as she writes on 21 May 1926: Press photographers still come in all the time to take a look at the diorama. Engel leads the Maasbode reporter. A.B. Wigman is at the exhibition and also wants to see the diorama. Setting everything up for the exhibition makes me  very busy. In the afternoon I have to be photographed for the Telegraaf.

Unfortunately I couldn’t find that photo.

Van Burkom, chairman of the Natural History Association, will open the exhibition and diorama on 22 May. In his opening speech, which was printed in full in the Algemeen Handelsblad, Tera is explicitly praised: Amsterdam, the cradle of the association, was automatically designated as the place for this exhibition and the board of the society “Natura Artis Magistra” and in particular the director Dr. Kerbert, was thanked by the speaker for the opportunity to hold it, with great support being received from Ms. Van Benthem Jutting, who in many cases was the link between the association and “Artis”. 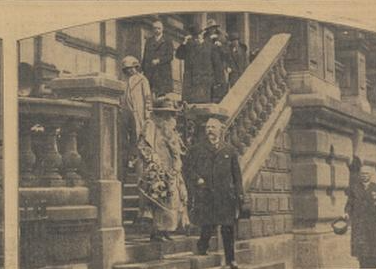 On 30 May, the royal family also comes to admire the diorama and the exhibition: At 12 noon to Amsterdam for the Queen’s visit to the museum. Nella and Hans (children of the Beaufort) give flowers and then Baasje walks with the majesty to the diorama. She stays there for a long time and talks a lot with Steenhuizen and Jansen.

She is drinking tea and Juliana is talking to Nella. Part of her entourage waits in the aquarium. Laman Trip, who also came with the prince yesterday, recognizes me and comes to say hello. The mayor even recognizes me, very extraordinary! In the museum on the way back, Engel and me are introduced to H.M. She asks where we studied and whether we ever had to stuff dead  animals and whether we went on many excursions or travelled a lot. After that I walked with Nella and the Princess in the aquarium.  And when the royal family had disappeared, we sat down and had a nice cup of tea with the board of Artis and the Heimans Foundation.

Princess Juliana (1909-2004) and Nella de Beaufort (1908-1999) are almost the same age and both are just under ten years younger than Tera. They get along well that day at the museum. Later Nella will marry Baron van Boetzelaar and after the war she will become a lady-in-waiting at Soestdijk Palace, but that is getting ahead of things. For now they are two teenage girls of 17.

Next time we’ll say goodbye to the museum and the shells and some family matters will take its place.