In an earlier blog we saw that Tera had a short courtship with Hans Bierens de Haan. After she has moved into rooms with a landlady, she doesn’t need to consider her father as much as before. For example, it says in her diary: (..) we ate in town, then went to the Zoologist evening in Sluiter’s lab. Had quite a lot of fun. (…) Finally, we went for a beer in “the pub of Tera” as Versluys calls it, with Engel, van Bemmelen, Tox, B. de Haan, Jan Verwey, Beaufort, Versluys, Non and me. (…). It is of course also the “roaring twenties” where the skirts get shorter and the manners become looser

When Tera is twenty-six she seriously falls in love. Tidde (Tip) Westerdijk (1885-1950) is fourteen years older than Tera. He married Marietje in 1913 and he has two children, a boy and a girl (Jan and Dora). Tip works as a salesman in the laboratory instrument trade. In any case, she knows him from the time when he helped her with a binocular magnifying glass in January 1925: Mr. Westerdijk (salm) exchanges my binocular magnifying glass, which is not entirely in good order, for one that does give good images, surprisingly kind.  He is the brother of professor Johanna (Hans) Westerdijk and a cousin of Non Scheffer, a good friend and colleague of Tera. Because of his marriage nothing can come of it, but still, it is intense.

Walked in the dunes with Westerdijk. Lots of beautiful berries, but still only few autumn colors.  He’s a good, warm-hearted fine fellow, in spite of all his grumblings. Had dinner with them in Zandvoort. The kids are cute and full of stories

Is he still a fine fellow here, later it goes further, although she doesn’t really make that explicit even in her diary. She is treated by his family as a house friend.

Walked near Zandvoort with Westerdijk. Lots of rain and wind, but beach very rich with thousands of starfish….. Drinking coffee on top of a dune under an umbrella, little talk and a lot of thoughts

It is not clear what is being thought and what needs to be discussed, but it does affect her. January 2, 1926 : At 5 o’clock suddenly I find Tip visiting, who comes to ask if  I want to go for a walk to Noordwijk tomorrow. That might be nice.

And the next day they are on the road together: Beach again quite rich, but nothing special. There is quite a bit of headwind and we are not making fast progress. Rest for a while at post 74 at half past eleven and go for coffee in the dunes at 1 o’clock. We have all kinds of things to discuss, but it is not cheerful and it will keep us busy for a long time. Later walk through the dunes and turn off at half past three to Noordwijkerhout, because it starts to rain.

The next morning she is upset and unbalanced: Tip and I are not balanced yet, but we will fight it out and do our best. At the moment it feels like an enormous hangover. 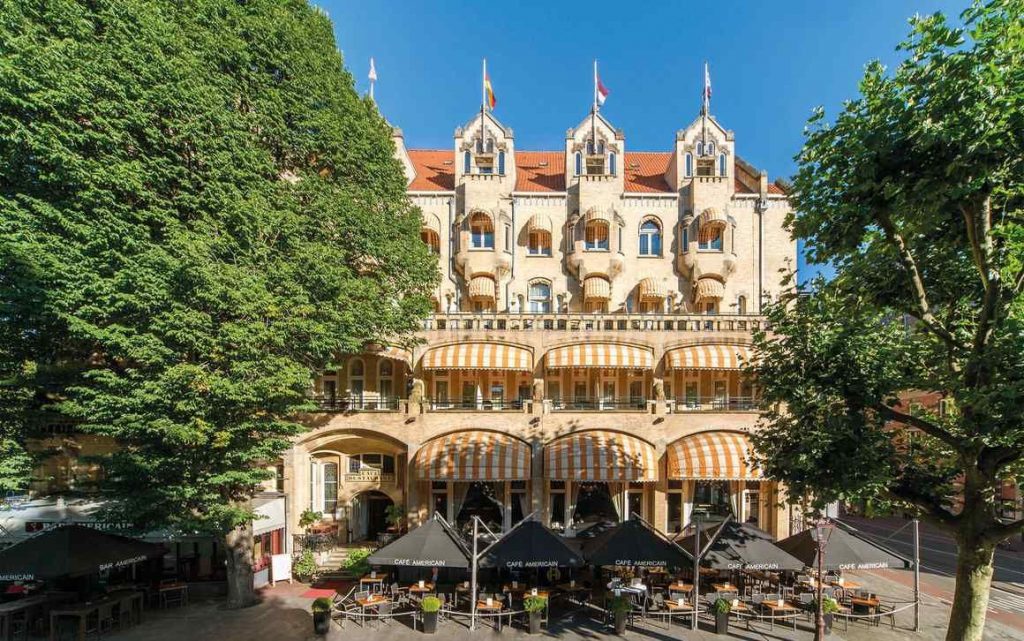 They eat in town at Americain, (a famous restaurant in Amsterdam, see photo) go to the movie Gold Rush with Charlie Chaplin together. In February 1926, Tip and Marietje are married for twelve and a half years. Tera goes with Non Scheffer to cook a rice table and celebrate this anniversary with the Westerdijk family.

Every now and then they have a nice day together and the two of them go out.

On April 2, 1926: With Tip to Uitgeest by train. Then on the bike further over Castricum, Egmond and further along the beach to the Hondsbosse. Along the way we drank coffee on a dune, so lovely in the sun that we stayed there for over two hours. Searching for shells in a puddle behind the Hondsbosse. Then via Alkmaar by train to Haarlem. There we ate at the station and at 09.07 Tip goes to Zandvoort. And I go home. A radiant day, which will leave me  a beautiful memory.

Three days later, Tera leaves for Frankfurt for two weeks to work at the Museum of Natural History. Mrs. Weber has asked to pass by Eerbeek on the way back, but Tera refuses for hygienic reasons: I’ll have to decline because I’ll be too dirty then. Two weeks of hotel and a train journey are enough to get all your clothes dirty. In Frankfurt she also meets Prashad: Sitting in the museum looking through literature and reasoning a lot with Prashad. A lovely Hindu with an unbelievable pile of knowledge on hand. He is a full-blooded Brahmin and may not eat beef, for example, as this comes from their sacred animal. His wife caused quite a stir in Frankfurt. Walks in colorful Indian robes with lots of gold thread and with a large diamond in her nostril as a sign of her high caste. We will come across Prashad later.

When she returns from Frankfurt, Tip picks her up from the station and they eat together in town.

At the end of June 1926, Tip goes to Jena, probably on business. She writes that Tip : “writes important and extensive letters” I think that I have come to a decision for myself. If only he would do the same.

But even though she says she has come to a decision, the relationship does not end yet. When she stays with her friend Corrie on the Veluwe in the summer, she grumbles that she doesn’t hear from Tip and when he finally writes, she says with relief that he couldn’t write because he had caught a cold. In August 1926 Tera goes to work for a month at the experimental station in Den Helder, also to train new lab technicians. Tip comes for a week, they sail to Texel and Terschelling, walk in the dunes and fish for snails and other animals.

Walked right across the island to the Badpaviljoen, went for a swim and drank coffee and walked back to West around the top of Terschelling in the afternoon. Beach very wide but little to be found. The west side is all drifting dunes, nice to see, but bad to walk in. (On the photo Tera on the boat to Terschelling) 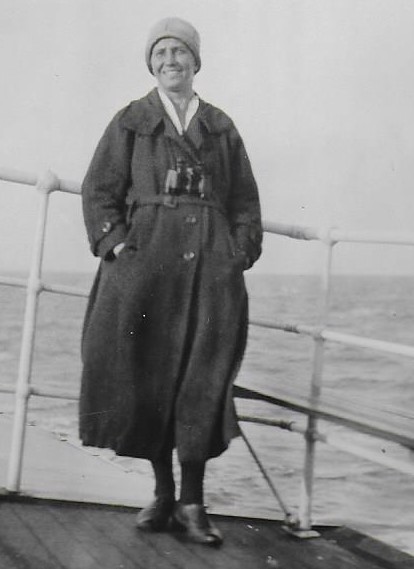 End up on the green beach, and from there venture an attack on the Brandaris, which gives a beautiful view, in the evening by bus to Midland and walk to the dike on the Wadden Sea. Collected in a sweet and a salty ditch along the way.

Sometime between this moment and 1930, the relationship with Tip ends, he does not divorce his wife. How far the relationship went is also unclear. Tera is a “free-spirited” woman, but you don’t speak or write about some things, not even in your diary. It is not clear how the contact between Tera and the Westerdijk family is after the end of the relationship. Tip is never again mentioned in her correspondence. Tera does receive a funeral card when Tip dies in 1950, aged sixty-four. In 1951 his son became professor of Physics at the Technische Hogeschool in Delft. I couldn’t find any pictures of Tip Westerdijk.

The relationship with his sister Hans Westerdijk had never been great, and has not improved as a result of this affair. Next week we will see that Hans Westerdijk is organizing the International Women’s Congress in Amsterdam.