The previous blog was about Tera’s relationship with Tip Westerdijk and therefore also with his sister Johanna (Hans) Westerdijk (1883-1961). Hans Westerdijk had in many ways followed the same path as Tera. Through secondary education she had ended up at the HBS, which at that time did not yet grant access to university exams. She passed the state exam in 1904 and obtained the same MO certificate as Tera did twenty years later. After her doctorate abroad, she became director of the Phyto-pathological laboratory ‘Willie Commelin Scholten’ in Amsterdam in 1906 and held this position until 1952. Hans Westerdijk was also in charge of the fungus collection of the Central Bureau for Fungus cultures in 1907,  founded by the botanist F.A.F.C Went (1863-1935). The laboratory ‘Willie Commelin Scholten’ moved to Baarn in 1921. Under her rule, the fungus collection grew from approximately 80 to 11,000 species, the largest collection in the world. She remained director until 1958. In 1917 she was appointed professor by special appointment in Utrecht. Unlike Tera, she has an official doctorate. That stings Tera.

Hans Westerdijk is also more politically inspired and more extrovert than Tera. Scientifically they have nothing to do with each other. After all, Tera focuses entirely on zoology, while Westerdijk focuses on fungi, i.e. on botany.

From 1918 to 1931, Westerdijk was one of the first board members of the Association of Women with an Academic Education. She was also closely involved with the International Federation of University women, founded in 1919, partly with the aim of promoting world peace. Both the Dutch and the International associations also have the objective of supporting students and graduates, they provide scholarships and ensure that women come into contact with each other, through lectures and study meetings.

In 1926 Hans Westerdijk takes the initiative to organize the fourth congress of this international federation in Amsterdam. Tera writes in her diary: Opening congress International Federation University Women. In the morning and in the afternoon a few groups come to see the zoological museum. A very mixed group of nationalities. We ate at Non’s and went to the Colonial Institute together. Mrs. Weber and Prof. and Mrs. Ruge are also there. Hans Westerdijks opening lecture is very successful.

Tera does not write that after the opening lecture, the same Hans Westerdijk, together with her (mainly female) assistants, treats the guests to a revue in fourteen parts, about the position of women.

The next day Tera goes back to her normal work, although there is a very extensive coffee table with important (international) ladies: Hans W. joins us for coffee with Gräfin v Linden, Miss Cullis, Tine Tammes and To Doyer. That makes with the Weber family, Mrs. Ruge, Neeltje, Bussy, Beaufort, Non, Annie v. D. and I a very busy table. In the afternoon I showed the diorama.

Mrs. Ruge is a good friend of the Webers and most likely the widow of Georg Ruge, who died in 1919, and was first professor in Amsterdam, later in Zurich. When Tera is staying at Eerbeek, Mrs. Ruge sometimes joins the party, although she lives in Zurich.

A day later there is another meeting where women from different countries make announcements about the developments in their field. Hans Westerdijk discusses the fate of the 246 graduated female biologists. Some of them are married and therefore unemployed, but 130 are employed in education and 42 in science. She concludes that “women can be found in all kinds of biological work fields ”. 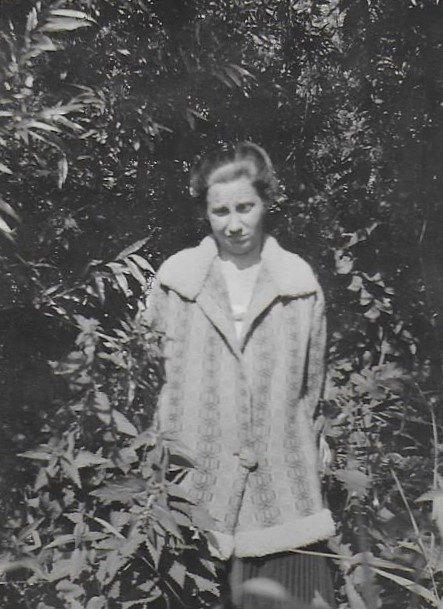 Tera writes scornfully in her diary: Hans W. tells the “wise women” what Dutch biological women do in her profession. She brags enormously. Me myself appear on screen  3 X life size.

On the photo, Tera in 1926 photographed in the Haarlemmerhout

A few years later, when Tera had just arrived in the Indies, she wrote to her father on 12 May 1930: Mrs. Stigter, the wife of the director of the institute for the insane, was also at the reception. Here she is more or less the chief of the educated women in the Indies, a similar club to that association of women with an academic education in Holland. She asked me if I would come to the next meeting. Now I’ve always hated that Dutch association so excessively, and I’m afraid it’s no better here with those self-satisfied old and no longer young ladies, who act would-be student-like. To make matters worse, Mrs. Stigter added that she would be giving a lecture herself, which she had already presented elsewhere with great success! Now Really. When you see such a bragging woman being so full of herself, she frightens you. So I just mumbled that it was not for me. She must have found me a conceited stick up, because the Stigters are behaving very important and dignified in Buitenzorg.

Her father warns her to get along with the right people, because in a small Dutch community you might need each other.

In November 1931 Tera writes: I also cancelled my membership of that most annoying club of wise bitches, the association of women with academic education. The frugal time was a welcome excuse to get rid of it, I’ve never been so relieved.

Here too Tera’s father is more tolerant than his daughter, or he realizes better that contacts are important and he responds: In my opinion, this association has a reason to exist and therefore deserves support, also because it can be a support for its members. After all, it is the association that organized a conference in Amsterdam a few years ago, at which quite a few foreign guests appeared and at which Prof. Hans Westerdijk has presented herself quit well with her spirit and talents. This will not easily be imitated by  a union of men.

In 1932 Hans Westerdijk appears again in Tera’s correspondence. In the meantime, bad times have arrived as a result of the global economic crisis, which also affects the academic staff. Tera writes not so kind in January 1932: The disturbing rumours about the botanical garden came here in a letter from van Leeuwen to his wife. The latter told it again to Hans Westerdijk and that woman to whoever wanted to hear it, old tea-drinking chatterbox! who does not know what to say and what to keep silent.

Once again I have done my best to bring home all the names of wise ladies mentioned. Additions are welcome.

In the next blog we will see how Tera ended up in the Indies and which the Botanic Garden she is talking about.