In the previous blog we saw that in August 1926 the International Academic Women’s Congress was organized in Amsterdam. We then ended with anecdotes from The Dutch East Indies. We’ll start with that now.

On September 20, 1926, Tera writes in her diary: Baasje has a letter from Dammerman that he is coming to Holland in the spring of 1927 and wants to try to get an assistant, preferably someone who does molluscs. He asks Beaufort to find someone. Well I’m living  right next door. I wouldn’t like to leave Amsterdam, but it’s the only way to see a little more of the world, and maybe I could come back. Well, we’ll talk about that later.

And she talks about it at the museum, with Weber, with her father, and undoubtedly with the alderman and officials from the Amsterdam administration, after all, the museum is part of the university and therefore of the municipality of Amsterdam. It is agreed that Tera will be given a year of unpaid leave in Amsterdam to be appointed to ‘s Lands Botanical Garden in Buitenzorg in the Dutch East Indies. On January 17 1930, Tera leaves by train for Genoa, to board the boat to Batavia (now Jakarta). That boat is the MS Christiaan Huijgens pictured above. That was a common way of traveling. The boxes with luggage for the Dutch East Indies were brought on board in Amsterdam. In addition to clothes and books, Tera also takes her bicycle with her. The bicycle is taken apart and put in a box, to be reassembled later in the Indies. The ship then departs from Amsterdam, almost without passengers, to Genoa or Marseille to pick up the passengers there. This was mainly prompted by the often bad weather in the North Sea, which caused a lot of seasickness.

Father takes her to the station in The Hague. In the train she already meets some people who are also going to the Indies. 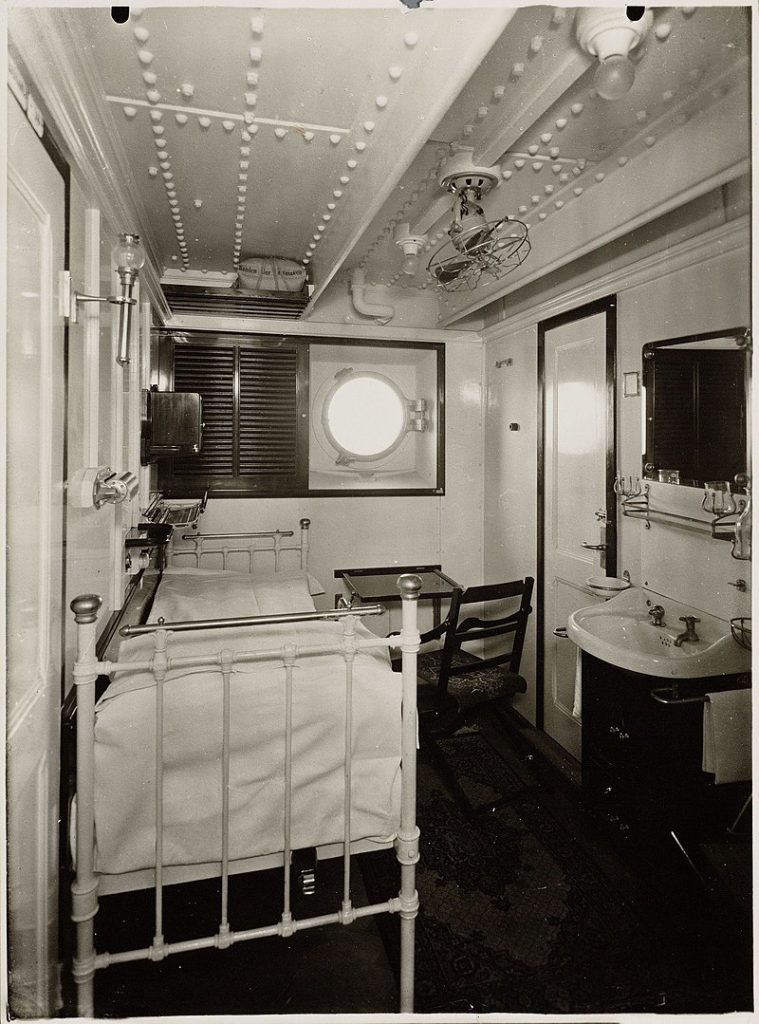 She travels second class on the boat, forcing her to share a cabin. The single cabins are very cramped (see image) She writes: In my cabin I have a Mrs. van Berkel, bride by proxy (She is married by proxy, her husband is already in the Dutch East Indies, where the woman will join him.), Roman Catholic  (just the thing for me!!), not very civilized and a bit stupid, but friendly. She had become acquainted with a few different “proxies” on the train and had booked a small dining table with them, and immediately told the steward that he should put me there too, without asking me.

I thought it was very friendly but after having dined with them once, I immediately requested a change. For “my proxy” is still sacred in comparison to the majority of the rest, who are very uncivilized and talk of: “O djee I loss mee kee ” and “Oh bugger Me loss a button of me shoe “. One snatched the bag from her friend right in front of me, but the worst was the very poor table manners. You wonder how in the world it is possible for someone to have such manners and you would feel sorry for the men who get stuck with them.

Tera is a bit of a snob, talking vulgar dialect, smacking and lack of manners are an abomination to her. She therefore quickly seeks and finds more civilized company: Fortunately, I found pleasant accommodation at the table of the Paaschen couple, where the first officer, Van Rees Vellinga, presides and where Mr. and Mrs. Bruijnsteen (son of the former organist in Haarlem) are also seated. Together with a sister-in-law of theirs Mrs. Bossche and the mother of the latter Mrs. Looijen.

All kind of entertainment is organized on board to pass the time. Bridge competitions, Bal Masques and games for the kids. She has quite a few things to say about the other passengers, who she doesn’t think are all civilized enough: The worst, however, are the older gentlemen (?) with or without ladies (sic!). These are of course people who have to pay their own way, or earn so little that they are sent second class. In addition, there are a few fat men with 7 double chins and loose collars. And a few who act like dandies and talk a high-haarlemmerdijks (like cockney Amsterdam)  that will knock you back. And a few who play for Don Juan and flirt with the brides by proxy. The worst part is that the “proxies” respond to it!

After Genoa, the journey continues towards Port Said, where a letter from father awaits her and she posts her first letter to father: Furthermore, in Port Said there is an amusing mess of beggars, merchants, passengers, rattling cars. I bustled along the quay (…) At 11 o’clock we left P.S. and now came that very interesting navigation through the canal, where the Huygens was towering on top. We saw most of it during the day and I really enjoyed the lakes, the glimpse of the desert, with real camels and the organization of the boat traffic.

After the Suez Canal, over the Red Sea to the Indian Ocean where they arrive on February 8 in Colombo, in present-day Sri Lanka. She disembarks for a day and explores the island with other guests in a car: drove around the city, visited the Dutch church, a Buddhist temple and came through the beautifully landscaped cinnamon gardens (..) That’s how we ended up on Mount Lavinia, somewhere south of Colombo. There is a large hotel on a protruding hill, beautifully situated by the sea. We drank something cold there which made us even warmer and I looked for some shells on the beach. The first tropical! The Riviera is child’s play in comparison. So my day was already made.

Then via the Bay of Bengal to Belawan (near Medan on Sumatra): In Belawan came on board Mr. van der Meer Mohr, from the Deli test station, who came to greet his brother on board. I knew him from the correspondence and now he came to ask if I wanted to see something from Medan in his car. That was very friendly and in a short time I first saw the Deli test station and spoke to the directors Kuijper and Gorter (from Leiden) and then I visited a girl Huender (Amsterdam) who is a teacher at the HBS in Medan. With her and with Gorter I toured the city very nicely, past the palace of the sultan, the mosque, the Klingenwijk, the Chinese neighborhood, etc. Then quickly back to Belawan from where we left at 11 o’clock.

Then on to Singapore and then to Batavia where she arrives on Friday 14 February. The journey took exactly four weeks. In the harbor of Tandjong Priok: There were a lot of people and I soon saw Marius, with Dolf Westhoff. Lieftinck and de Jong were also there, which was very nice. They all came on board and we walked around the ship for a while. Marius looks good, the influenza is already completely forgotten. He still has some Dutch color and does not look as uniformly yellow as most of the people here. In Dolf’s car we went to Batavia with some luggage. It was hazy and on the way we got a heavy shower. Lieftinck and de Jong returned to Buitenzorg. At half past ten we were at Aunt Jans. She had bought me some beautiful flowers.

Her brother Marius went back to the Indies in 1927 and knows of her arrival. Cousin Dolf Westhoff and aunt Jans are related to her mother who had Dutch Indian roots. Lieftinck and de Jong are colleagues from Buitenzorg. Both also studied in Amsterdam and are therefore no strangers to Tera.

She has really been looking forward to staying in the Indies, Tera is not easily afraid and likes an adventure. She loved flying and she also liked this boat trip to the Indies, which she describes with a rather cool matter of factishness: … everything confirms my statement that nothing is as simple as making a trip to the Indies, you are passive and if you do what the captain and the shipping company tells you,  you will get there quit easily.

In the next blog the first steps on Dutch Indian soil.