In the previous blog we saw Pico moving to Ginneken near Breda with his sick mother. Today we say goodbye to Anna Weber.

In previous blogs we already learned that Anna Weber is a great example for Tera and a dear and loyal friend. In the summers of 1940 and 1941 Tera stays for  a few weeks with her cousin Kitty van der Mijll Dekker in Nunspeet. Both times she also visits Anna Weber in Eerbeek, about 45 kilometers further on, but according to Tera that is easy to cycle.

Anna Weber turns 90 on March 27, 1942. On this occasion, Algemeen Dagblad is devoting an extensive article to the life and work of Anna Weber. She is extensively honored therein: Mrs. Weber-Van Bosse owes her greatest scientific success without doubt to the Siboga expedition undertaken in 1899, whose botanist she was. This success has certainly contributed to the participation of the honorary doctorate of the Utrecht University; the Government made her a knight of the order of Oranje Nassau and promoted her to an officer in 1935.

Tera celebrates Anna Weber’s 90th birthday extensively. On the occasion of that birthday she writes a beautiful biography about Anna together with botanist Josephine Koster. An article written in French published in Blumea, a magazine published by the Herbarium in Leiden. Why the article is in French is a mystery to me.

Tera writes to Pico: Yesterday I sent you the non-scientific portion of the party issue for Mrs. Weber. Informally these contributions are called “the gossip”. People are very pleased with the biography by Jossy K. and me. No wonder since the subject patient in question is so charming. I will also send you a photo of the party on occasion. You can keep the gossip, I’d like the photo back.

Below the said photo. Anna is sitting on the left next to the dog. Tera at the very top left, pontifically in the middle is Johanna Westerdijk, whom we met earlier. 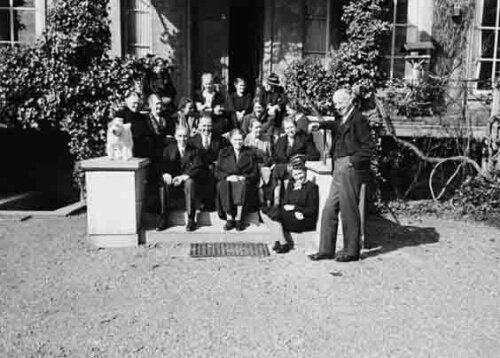 In September 1942 Tera goes to stay with Anna: The stay in Eerbeek was very pleasant and would have been even nicer if you had been there instead of R., if we had had better weather, or if Mrs. Weber condition wasn’t so worrying. . She has a high fever all the time, and that is too great a test for the heart. Now the doctor has started camphor injections. She responded favorably to that.

On October 29, 1942, Tera writes to Pico: Today during coffee, de Beaufort was called from Eerbeek to announce that Mrs. Weber has passed away. Despite the fact that we saw the end was near, early this week I received a letter that Madam became so weak, it is still a great sadness and it will leave a great void.

Tera is deeply shocked by it. Anna was an example for Tera both scientifically and emotionally. She writes to Pico: The loss of Mrs. Weber means a lot to me. And not only for me, everyone loses something sweet in their own way because of the passing of this pure soul: “Elle etait une faune pleine d’esprit, de bonté et de saguee”. I always found that saying especially applicable to her. Last Monday Beaufort, Engel and I were at the funeral, along with many, many others. In addition to a few village dignitaries, Boldingh, the last survivor of the Siboga, Herman Lam and Gunning (rector of the Amsterdam lyceum) also spoke. The journey was long and grubby, and I came home in the dark (which I really hate). (..) Peter (the dog) has been in the bedroom all the days of Madams illness. He was always in front of the bed, sometimes on top of it. He has guarded her in his own way. (..) Next Thursday, de Beaufort and I will go to Eerbeek for a few days, until Saturday, to find out what papers and books by Prof. Weber will  have to come to Amsterdam. The two ladies-in-waiting will remain at the house until the end of the year to liquidate the estate. In my old diaries I find that I came to Eerbeek for the first time on June 10, 1922. So for 20 years! At the funeral, the Eerbeek brass band played chorale music. You can’t imagine how unbelievably beautiful that sounded!

And so, Tera goes to Eerbeek a few days later to sort out Max Weber’s papers. She writes: I am about finished with what should and should not come to Amsterdam. It was very neatly prepared, as Weber kept the correspondence and notes in envelopes: (..) What was not immediately understandable was taken on large trays to the blue room, where we could carefully examine the papers in the evenings (W. room was not heated, and could not be darkened, so we could not work there for long). A large section was also the countless photos and portraits. Often it was not stated who was on it. And then if none of us would know who was in the picture, they were torn to pieces. Sleeswijk (executor and nephew) also stayed there at the same time, which was practical, to be able to consult with him about the destination of certain documents. De Beaufort came over for one day, but because he had had a lot of trouble with trains, his visit was limited from half past two to half past four. On Saturday I left again at 8 o’clock: I now have the feeling that it was the last time I was there. 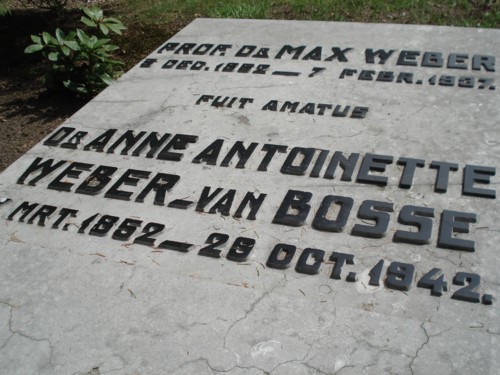 The Estate Eerbeek is bequeathed by Anna to the Gelders Landscape foundation. Anna is buried with her husband Max Weber. The house in Eerbeek now houses a hotel, which is located on the Max Weberlaan.

Thus ends the life of Tera’s great example and role model. In the next blog we will see how the war is increasingly affecting daily life.