In the previous blog we said goodbye to Anna Weber. We now return to Amsterdam and read about Tera’s involvement with her Jewish friends, where more goodbyes follow.

In October 1942 Tera is very concerned about the Arbeitseinsatz (the German system of forced labor). Young men are arrested to work in Germany. Her nephew Chris, who is a student, refuses to sign his Aryan declaration and is sent to Berlin to work in a factory. There are rumors that unmarried women also have to go to work in Germany: She writes to Breda: Pico, if I am now also sent to Germany to work, will you please marry me on the spot, because then I don’t have to go. It’s hard to hear the number of people that are round up from banks, printers, offices, large shops, the men between 18 and 45, the women between 25 and 45. Almost as bad as prosecuting the Jews.

He promptly responds in the affirmative, because in her next letter she writes: I thought you would answer just like that. Let’s hope it won’t be necessary to talk about it seriously for the time being. There seems to have been so much opposition to the summoning of the girls, that it has now been determined that they will not go to Germany, but that they will be employed in the Netherlands in government and semi-official companies, in return more men of these companies are sent to Germany. All together an uncertain existence. Many emergency marriages have already been concluded. One must doubt whether these are always happy.

Tera has many Jewish acquaintances and colleagues; those who answer voluntarily to the summons leave their valuables with her, such as Jacob Heimans, who is sent to Barneveld. The Barneveld group was a group of Jewish people who had ended up on a list because of their “services to Dutch society”. mr. dr. Frederiks, Secretary General of the home office, had compiled this list and had received permission to accommodate these people on an estate in Barneveld.

Edith Jüdell (1896-1943) fled from Germany to the Netherlands in 1933. She was a laboratory assistant at the psychological and physiological laboratory in the Valerius clinic in Amsterdam. In March 1938 she started work at the Vrije Universiteit (VU). In 1940 it turned out that she was the only Jewish staff member of the VU. At the end of November 1940 she was fired because she was Jewish, with temporary retention of salary. Her supervisor, professor Van der Horst, had tried in vain to offer her another job at the Valerius clinic. (source: Jewish Monument). Edith is a good friend of Tera. Tera writes: The Jews again suffer. This afternoon I was urgently summoned to Edith’s. On Monday she has to go to Barneveld, the elite Jewish camp, where it must be significantly better than in Westerbork or Vught, and from where she will probably not be sent to Poland so soon. It seems that Frederiks has worked very hard for this. Most of the camp mates are prominent Dutch scholars and artists. 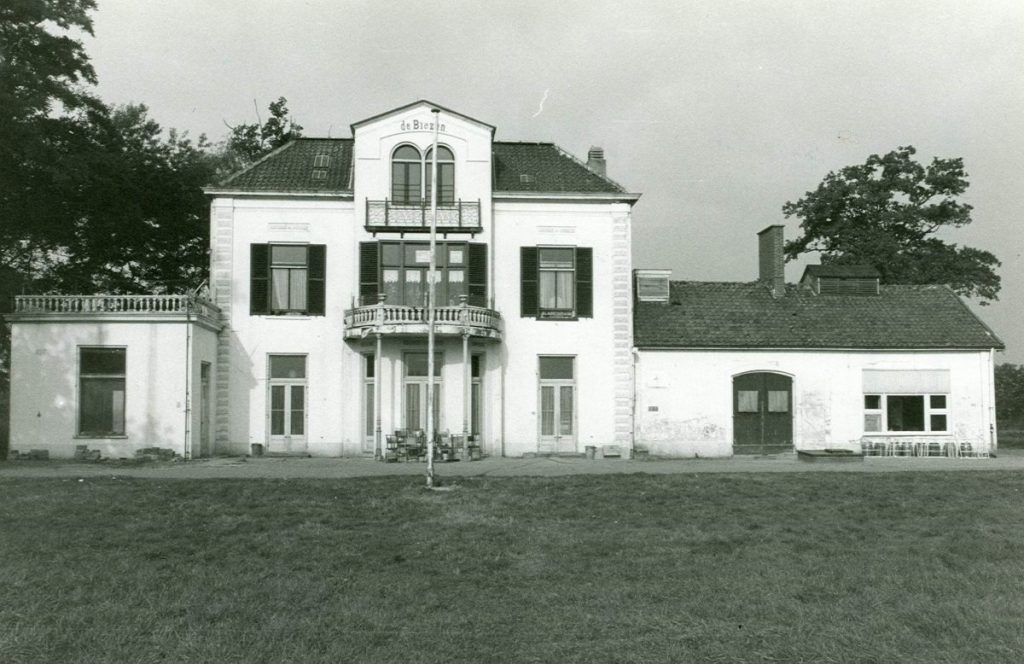 When Edith is in Barneveld (see photo) Tera visits her there in June 1943. Third Whitsun day I went to Barneveld to visit Edith Judell. The house is a 45 minute walk from the station, in a beautiful park, with a large vegetable garden, meadows.

Before the war it was already used as a workers pension which didn’t improve the house : worn out, tattered, ugly kitchen furniture, but otherwise not unsuitable. Because it is overcrowded (175 people) it is messy and turbulent. All developed and civilized people, many artists, who all help in their own way in the house, kitchen and garden.

Two months later in August 1943 Edith falls ill and is taken to the hospital in Amsterdam, where she dies, probably of colon cancer.

Tera writes: I had two very busy weeks. Edith’s death brought all kinds of unexpected activities. After consultation with Prof. Van der Horst in the Valerius clinic on Monday 6 September at 9.30 am, we tried to give her a Protestant funeral. She never felt anything for the Jewish faith, and had also left the Jewish community for some time. (…) I had a free hand to consult with a funeral home about the interment at Zorgvlied. Before I could get hold of the administrator of this company, it was already half past five! And we wanted to handle the funeral the very next day for various reasons. To their credit I must say that they have done so with the greatest possible haste and good taste. Those people can work on short notice! In the evening I phoned Rev. Ten Boom in Hilversum and he immediately declared himself willing to come over and speak at the funeral. The funeral took place on Tuesday. In addition to Ten Boom, the deputy director of the Valerius clinic Dr. Booy said a few words. There was a very small gathering of people from the clinic, one Jewish friend, Non Scheffer, and I. It was all very sober and modest but I think it was exactly as she would have wanted it.

In 1943 the big raid in Amsterdam took place: Wednesday there was a big raid here again. The entire city center was heavily cordoned off. This includes the Plantation. The only access was via Damstraat, so I cycled there. At that checkpoint (Dutch) it was extremely busy and many were sent back. Civil servants from the City Hall and the Registry Office were allowed to continue on presentation of their ID card. I got through too. On the way 3 more posts, including German ones to check identity cards, but I was there by 9.30 am. The others also showed up with all sorts of adventures. All day long we sat inside the fortress, were not allowed on the street (which was not bad), but luckily we could go into garden. Meanwhile, Jews were taken from their houses, herded together like sheep, put in a number of empty tram cars and driven to the station. Surely not one of them escaped, because it was rigorous. I was glad when I got out of the barrier at the colonial institute at 5 o’clock, a kind of tightness lifted off me, and I had the feeling that I was either going to get sick or would start crying.

There are many stories about Artis in the war. The Zoo was open to the public and it was often crowded because there was little other entertainment. Moreover, the Germans wanted to act as if “everything was normal”. People have been into hiding in Artis, employees of Artis itself, but also Jewish people. (see photo on the right) 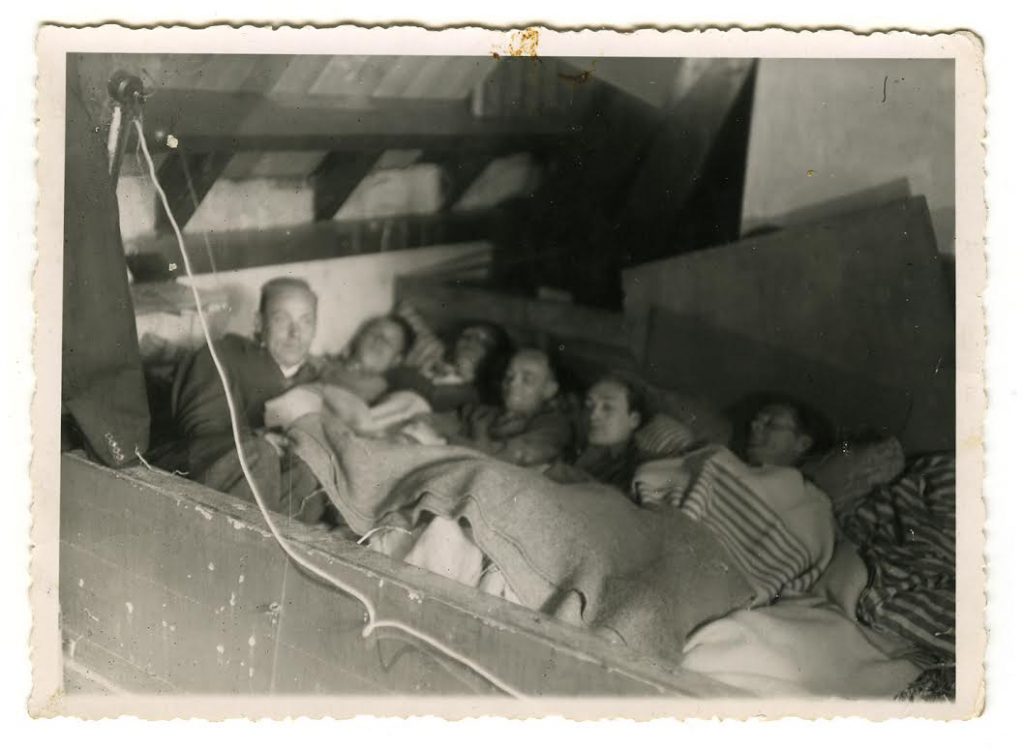 In 2020 Artis was closed for the public as a result of the Covid. The video below shows something about Artis in wartime (unfortunately only available in Dutch)

Tera does not mention anything about people in hiding in Artis in her letters. If she had known, and it is hard to imagine that she did not know, it would have been very dangerous to write about it.

After the war she writes in June 1945: My share of underground work has not extended beyond the storage of Jewish belongings and the temporary shelter of Jews and men in the dangerous age group.