This website is called “Shells and Women”. The most important woman on this website is and will remain Tera van Benthem Jutting. However, she was not the first nor the only woman who was more or less professionally involved in collecting shells. One of my readers drew my attention to an article by Marianne Gossije that appeared in September 2020 in Zeeland, the magazine of the Zeeuws Genootschap van Wetenschappen, (Zeeland Society of Sciences) about one of her illustrious predecessors:

Florentine is the daughter of a doctor from The Hague. At the age of 27 she married Cornelis Rethaan Macaré, twenty years her senior, who was ennobled in 1844. From 1840 to 1855 the couple lived in Middelburg, where he was an alderman and member of the provincial council. He is also a member of the Zeeland Society of Sciences. And although women were not allowed to join the Society until 1888, Florentine is very involved and keeps herself busy with the shell collection.

When she was twelve she had been given a rare shell (Tonna Tesselata Lamarck) as a gift and she had been an avid collector of shells ever since. In the words of her husband: “Overviewing the collection of Horns and Shells some time ago together with my wife for whom conchiology has always been very attractive…. “ 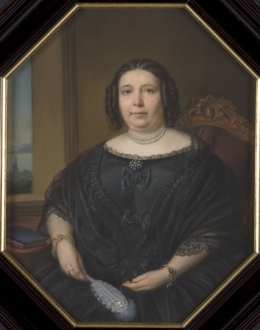 In Middelburg she had six children within seven years, one of whom died within a week and one was stillborn. This did not prevent her from occupying herself with different fields of interest, of course she had nannies and other staff to take care of her household. In addition to collecting shells, Madame was not without merit making watercolors of birds and flowers, and her work was exhibited at the Exhibition of Living Masters in the Hague Drawing Academy in 1845.

She also visits the world exhibitions of 1851 in London and 1855 in Paris. She wrote a travelogue of the first visit that was published in 1852. She visited all the major tourist attractions and describes Victorian London with humor. In 1855 the family moves to Utrecht. Cornelis died there in 1861. Florentine continued to live in Utrecht as his widow until her death in 1887.

In 2017, a blog was  published on the website of the Koninklijke Bibliotheek about the album amicorum or friend’s book, a loose-leaf poetry album, of Florentine in which she has been collecting poems from family and friends since she was twelve. It gives a clear picture of a lady who is at the center of the cultural life of those days. There are both drawn and written contributions from artists and writers of the time. For her wedding, the poet Adriaan Bogaers writes:

It is lovely to gaze upon the fields,

When the first flowers of Spring adorn them,

Refreshingly the view along the lake to stare

Where the  flowing azure before the coolness folds:

It is beautiful when the West gilds itself with the rays

Of the summer sun, which concludes her day’s journey;

But the fairest of all, of which the Earth may boast,

It is a bride, a sweet, graceful Bride.

Florentine is known in scientific circles for her collection of exotic shells. In an article about her correspondence with the Museum of Natural History in Leiden, Dolf van Bruggen describes Florentine as one of the most famous shell collectors of her time, but also portrays her vividly as: “slightly pompous, very blue-blooded although not a lady in her own right, and prone to gossip”.

Initially two shells are named after her. In the end one of those shells, the Conus Macarae Bernardi (see opposite) named after her in 1853, turned out to have been given a different name ten years earlier, that happens often, but it remains an honor. In one of her letters to the museum in Leiden, she refers to this shell, and she writes that she had not yet acquired this novelty. 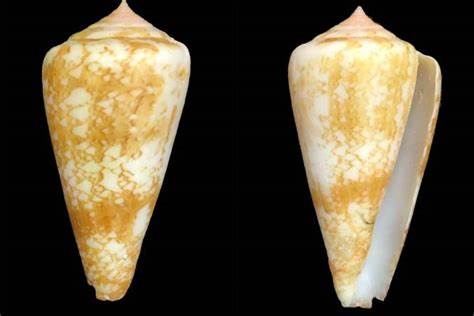 However, the sales catalog of her collection (1888) shows that she later succeeded in purchasing two specimen. In another letter, she proudly writes that she has had a grandson, having already had five granddaughters.

In 1955 the PZC (Provinciaals Zeeuwse Courant) reported that: “Jhr. Calkoen presented an important collection of exotic shells to the municipality of Amsterdam for its Zoological Museum, which has both scientific and historical significance, especially because the collection was part of the collection, collected by the late Mrs. Rethaan Macaré-Ontijd. part of which is already the property of the museum”.

This Jhr. Calkoen is most likely a grandson of Florentine as her daughter married with a Jhr. Calkoen. (Jhr. Stands for Jonkheer, a Dutch nobel title, best translated as squire)

The part that is already in the museum’s possession comes from another part of the estate of Madame. After sixty years of collecting a large part of her collection is auctioned in 1888. Her son writes the following about this collection in the sales catalogue: This collection grew from year on year, mainly thanks to specimens sent to her from time to time by good friends in the Indies and some officers of the Royal Navy, who not only enriched the collection with quantities of rare and precious shells and very beautiful specimens, but which also made it possible to often exchange duplicates for other shells.

The main buyers of the collection are Natura Artis Magistra, who also buys a chest of drawers in which Florentine kept her shells, and Mattheus Schepman, an important collector at the time.

This latest buyer’s collection will play an important role in Tera’s development, but more on that later.