On April 30, 1920, Tera returns from the Riviera together with Wicher van der Sleen and his fiancée Toos. Just under three weeks later, Wicher and Toos get married in Almelo. Tera goes to the wedding, of course, and criticizes the cousins in her diary: Wedding Party. Very nice atmosphere. Only those annoying cousins from Enschede hadn’t done anything, so I quickly made some nice verses. In other words, something has to be done at a wedding. The newlyweds are sung to, made fun off  and put in the spotlight.

Wicher and Toos as well as Tera have a good taste for traveling. Only  two months after they have returned from the Riviera, they are leaving again, now there are four of them. Atie Vorstman (1895-1964), a friend of Tera’s goes with them, although she arrives a few days later. Atie attended Latin School in Haarlem and in 1913 she started studying biology, in 1920 she obtained her master’s degree and in 1922 she obtained her doctorate. Like Tera, Atie was born in the Dutch East Indies and the ladies really like each other. They remain friends until Atie’s death in 1964. This time the journey goes to Normandy, now they come even closer to the remnants of the First World War.

They depart on 15 July 1920 : arriving at the station at noon for the  trip to the canal. By train to Antwerp. After Essen beautiful mountain ash in fruit. In Antwerp by bike through the city to the Schelde. Crossed the Schelde with a ferry and from the boat we had a beautiful view of the city and of the boats, including a French warship in the Schelde  (….) On the train to Ghent, change to Adinkerke. 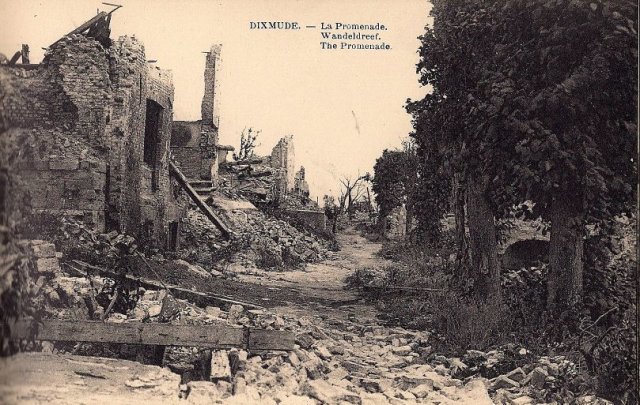 We  went through the devastated area of ​​Dixmuide. Everything is in ruins, some things are already build up again, shell-holes now full of gigantic cattails, dead trees, barbed wire rubbish, gigantic graveyards. It must have looked something like this.

Visitation in Adinkerke was nothing, nor was it at the French border station Ghijvelde. Got off the bus in Dunkirk and started the cycling trip. Along the seafront to Calais. Camped en route at Tapecule in the dunes behind a large beach meadow, with all kinds of trenches through it. In the evening we went to the sea. All kinds of cute shells…. We slept well

Just south of Calais they eat sandwiches on the site of the Channel Tunnel (in 1920). Napoleon already had plans for a tunnel connection between England and France. At the end of the 19th century, there was an Englishman, Ernst Beaumont, with plans for a tunnel, but the British government decided against it. Lloyd George suggested the idea of a tunnel during the peace talks of 1919 because it was believed that troops would have reached France faster with a tunnel. The British fear, of course, was that troops would then also be able to reach the United Kingdom more easily. So the plan was not executed.

On July 18 they climb by bike on the Blanc Nez, they go down again at great speed, where the front axle of one of the bikes breaks. They meet an English sergeant who takes them to the English camp to see if the bicycle can be repaired there. Apparently the English have not all left yet, one and a half years after the end of the war.

Then on to the Maritime station in Wimereux where they are received at the lab. They stay there for a few days. They search the beach, drive up and down to Boulogne where “there are many collapsed buildings without windows and many ugly soldier barracks”

Due to the bad weather and the wind, the tent roof tears, which is neatly repaired by Toos.

After about five days they leave again and take the train to Dieppe, they regularly have to wait for connections. The weather is bad, they have a lot of rain. Like on July 24: Rain, rain and more rain, we decided to wait until it got a little drier, then we picked up but in the meantime were overtaken by a pouring shower, so that we came soaking wet in the coach house. There we lit the primus, started cooking dinner and hung ourselves and the luggage to dry.

They arrive in Etretat on 26 July. They go into town , and because Tera gets a flat tire, again to the bicycle repair shop.

While they leave their bicycles at the repair shop they go down to the beach to have a look. Women are busy doing the laundry in freshwater pools. As is seen  on the right in the painting by Eugène Boudin from 1894. It will not have changed much in those 25 years. 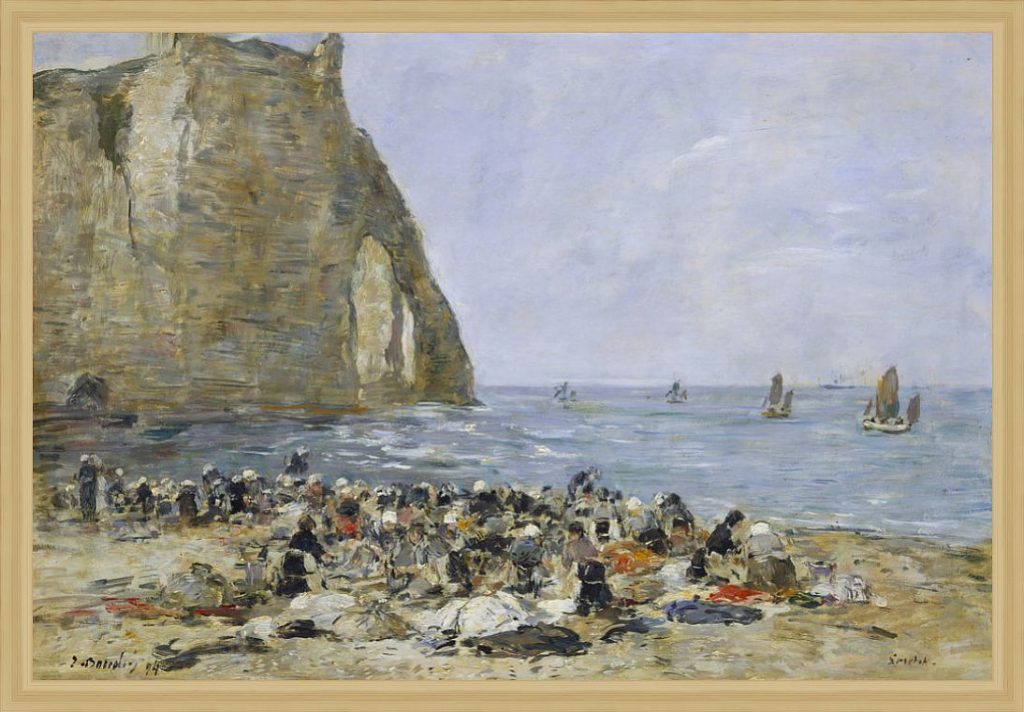 They can camp in an orchard just outside Etretat. But the French don’t trust it completely, such a foreign mess and on July 29, 1920:

in the morning to the town and to the beach, where fishing boats had just arrived and threw away a lot of beautiful things, sponges, shells …. Accosted by a customs officer, who checks Wicher’s backpack and finds the revolver, we are busted! Had to go to the lock up and waiting for the sergeant to come. Meanwhile sat packing shells and eating carrots. Finally he came and we had to go to the Gendarmerie Nationale. On the way there he told us that we had been mistaken for Bolsheviks. They soon saw that we were only harmless madmen and so they let us go. Back to the tents for cook, eating and packing. Then in the afternoon to the Basse Mer to catch snails. Soon the tide came up and we couldn’t go further out. Had to go back with all kinds of scrambling parties. I was soaked in  a big wave and I kept screaming. Savely back to the tents where we slept well in the tent for the last time.

Wicher had brought that revolver to shoot rabbits. On July 30, they leave for Rouen, where they  visit the cathedral in the evening. Then by train back to the Netherlands, they are held up at the border, where the visitation takes too long, so that they miss the connection to Rotterdam in Antwerp. They rent a car and drive to the border. They get off at the Belgian customs, they are officially not allowed through, because the office is closed. They ask what would happen if they drive on anyway, the customs officer says with a smile: “Try it, sir.” Of course nothing happens. At half past one in the morning they ring the bell at a hotel in Ossendrecht, where the innkeeper gets out of bed to accommodate them.

From Ossendrecht, Atie and Tera leave for Zeeland where they will camp for another week. At half past seven on the bike to Woensdrecht, by rail to Goes and luckily the rail boat connected. Atie and I stamped hard on our bikes, because the Goes Katse Veer connection is now designed for car speed. At half past eleven in Zierikzee and there we waited for the people of the community college with whom we would spend a week at Schouwen. Finally at 5 o’clock in Haamstede.

Jokes are made non-stop, there is singing and there is work. They go up the salt marshes, they take the bicycle or the tram across the island. It is similar to what Stefan Zweig writes about “the youth of today”: “Today when I see young people coming out of their schools and universities with their heads raised and their faces cheerful, when I see them together, boys and girls, in free and unconcerned friendship without false shyness and shame in study, sport and play ….. carefree life ….”.

The  whole trip is described in her diary.

Of course it can’t remain a holiday forever, but more about that next time.