In the years prior to Tera’s study, three developments played a role in academic education in Amsterdam and thus had a major impact on Tera’s life and work.

Max Weber (1852-1937) the zoologist, not to be confused with Max Weber the sociologist, was born on December 5, 1852 in Bonn. His mother is Dutch. His German father dies when Max is two years old. Friends and family step in and take care of his upbringing and education. Max studies medicine and natural history in Berlin and becomes a convinced Darwinist and zoologist there, but also takes a medical exam. In 1879 Max, who was raised entirely bilingually, comes permanently to the Netherlands, where he befriends Coenraad Kerbert (1849-1927), who is also a zoologist and lecturer in Amsterdam. In 1881 Max goes on a polar expedition and when he returns, he marries the widow Anna van Bosse (1852-1942). More about Anna later.

Melchior Treub (1851-1910) was a Dutch professor of biology in Leiden. Treub was appointed director of ‘s Lands Botanical Garden in Buitenzorg (now Bogor) on Java in 1880. In 1890 Treub founded the Society for the Promotion of the Physics Research of the Dutch Colonies (Treub-Maatschappij) and the first international biological testing station in the world. Sometime in the eighteen eighties, Max and Melchior get to know each other when the latter is on sick leave in the Netherlands. He suffers from malaria. 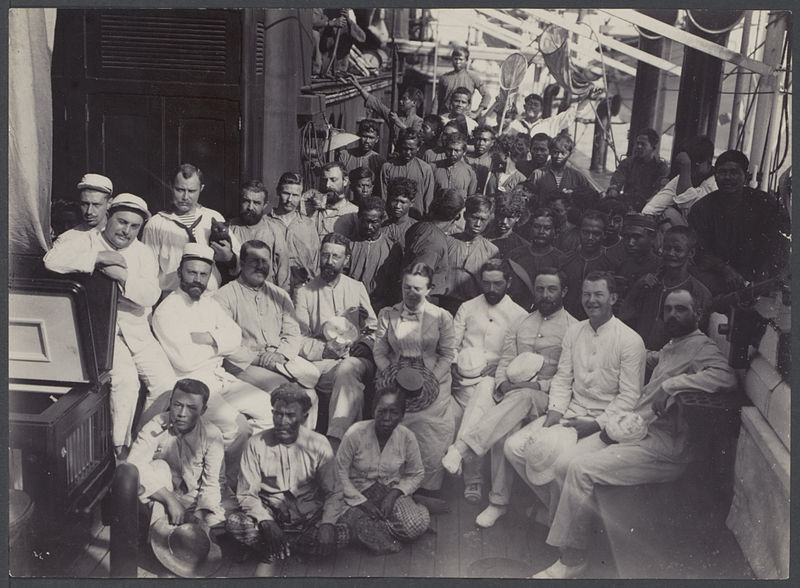 Crew Siboga with in the center Anna Weber- van Bosse, on the left of her Max Weber 1899

From 1896 Max Weber lobbied for a floating research vessel in South East Asia. In 1899 he succeeds and the Weber couple goes on an expedition together with six other scientists, ten Dutch naval officers and 45 mainly Javanese sailors. The expedition is financed by the Treub maatschappij and the steamship Siboga is made available by the Dutch government. This naval vessel has been converted into a research vessel and the expedition is to further map the Indian archipelago. They sail for more than a year, it is the first Dutch scientific naval expedition in which a woman participates, as a result of which the captain gives up his cabin for her, as befits a gentleman. Anna Weber writes a fascinating report about it: “A year on board the Siboga”. They return with a very rich loot of biological material. It is so much that they and others can occupy themselves with it for the rest of their years. The Webers have lived on the Eerbeek estate since 1895, where they work on the finds from the Siboga expedition in their own laboratory. This estate will be discussed in detail later.

The Atheneum Illustre was founded in 1632 when Casparus Barleaus and Gerardus Vossius held their inaugural addresses. In 1877 the Atheneum Illustre was transformed into the Municipal University, later the University of Amsterdam, and obtained the right to doctorate and new chairs were established. Professors were appointed by the city council and the mayor was chairman of the university board until 1961. Max Weber is appointed in 1883 at the age of 31 as the first Amsterdam professor of zoology.

In the blog about the art of collecting, we saw the rise of museums such as the British Museum and the Louvre. We also saw that cabinets of curiosities were being donated to museums.

The founding of the zoological society Natura Artis Magistra (nature as the teacher of art) in 1838 fits exactly into that tradition. This very posh society had the aim of introducing the wealthy bourgeoisie to the animal kingdom through lectures and demonstrations. Artis will, of course, later develop into a real zoo, but the garden is not accessible for the “common people” when first established. Only members of the society can enter the garden, in the month of September they can bring their guests with them. The animal collection initially consists of only a few monkeys and parrots, but is soon expanded because the society can buy the collection from a fair operator. Artis is growing rapidly and in 1877 already covers 10 hectares.

Initially, the ever-growing collection of so-called “naturalia”—reinforced specimens, skeletons, stuffed animals, shells, fossils, and rocks—was at least as important as the garden. This museum collection moved in 1855 to the ‘Groote’ Museum on Plantage Middenlaan, designed by Johannes van Maurik, which promptly became too small, after which Artis opened the Aquarium Building on Plantage Middenlaan 53 in 1882, now a national monument. 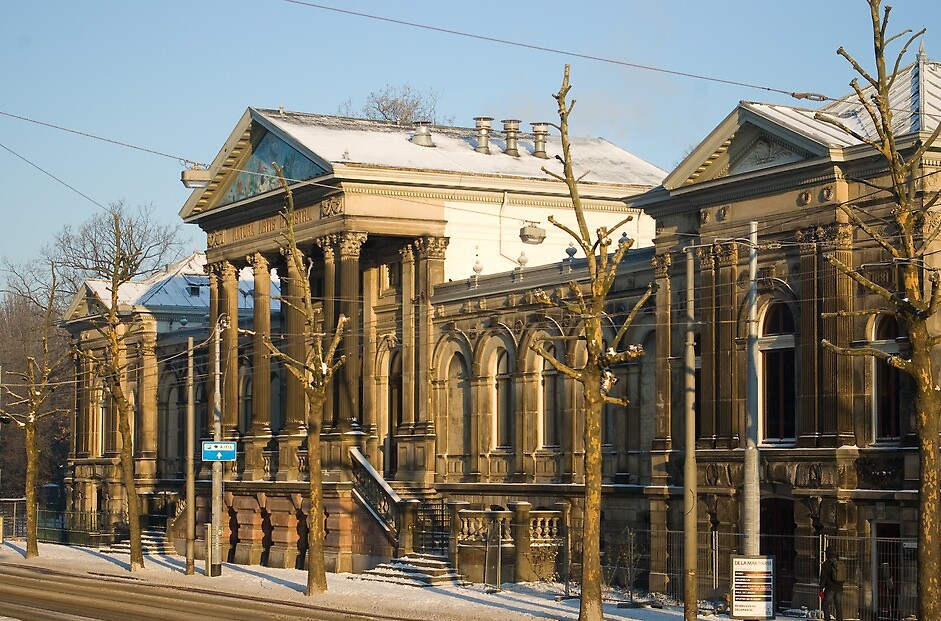 Specially reserved areas for the Municipal University have been set up in this building: professor’s rooms, a lecture hall and a museum space. Kerbert is appointed chief curator of the aquarium.

When Kerbert becomes director of Artis in 1890, he arranges that in 1892 the Artis collections are merged with those of the university and placed under the management of the university. The entire collection is housed in the aquarium building. This is in fact the start of the Zoological Museum Amsterdam. Kerbert and Weber arrange that by definition the professor of zoology at the university will also be the director of the Zoological Museum. Coenraad Kerbert and Max Weber thus clearly leave their mark on scientific natural history education in Amsterdam.

The Zoological Museum focused on purely scientific collections, with the emphasis on finding, describing, naming and classifying objects, such as (parts of) mammals, insects and invertebrates. Weber himself added important scientific material to the collections, partly from his travels to South Africa and the Arctic, but especially from the Siboga expedition to Indonesia. The Zoological Museum has seldom been a real museum. Despite the fact that it was always the intention to open up to the public as a full-fledged natural history museum , the resources of the city council were never sufficient. In the very readable book “Wie wat bewaart” by Menno Schilthuizen and Freek Vonk, the history of Natural History in the Netherlands is discussed in more detail. (Not translated in English)

Tera met Max Weber in July 1919 as a prospective student and wrote in her diary that Weber was at a meeting of the Zoological Society.

On March 23, 1920, Tera has an audience with Weber, as she herself writes in her diary: Weber has a little plan. But more on that next time.