A few weeks ago we saw in the blog about family ties that Marius, Tera’s older brother, left for the Dutch East Indies in 1928.

When Tera arrives in the Indies, Marius meets her up at the harbor and shows her around Batavia, where he lived as a child. She was only one year old when the family returned to the Netherlands so she can’t remember Batavia. 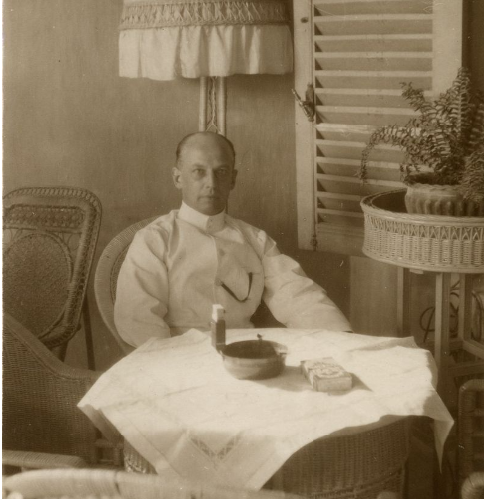 Marius lives in Soerabaya on East Java, about eight hundred kilometers from Buitenzorg, he is now 42 years old. (in the photo Marius on his front gallery in Soerabaja 1930). Marius works at a publishing house/bookstore run by van Ingen and later at the Protestant Church in Soerabaja as an administrator. Father Wouter arranged that first job for him through contacts in the Indies. Marius, like Tera, writes weekly to his father, but also to his wife in the Netherlands.

Despite the pressure on the relationship, there is no divorce and Marius has parental authority over his children. Every month he sends a money order to the Netherlands with amounts ranging from fl 25 to fl 100 (in current prices between 500 and 2000 euros). In addition to his work, Marius is a photographer. The collection of the Tropenmuseum contains about 70 photos of the Dutch East Indies made by Marius van Benthem Jutting. His sister doesn’t like that photography when she writes: There is also an I. Bueters  at home there. He is  about 28 years old, a rich boy who does everything he pleases, including spending a lot on photography. And with that he infected Marius, so I’m afraid he spends more on photography than his wallet can carry. If I mentioned it carefully like: that the Kodak store had a good customer in him, or: why he took photos of everything he saw and left nothing to his memory capacity, I got an evasive or impatient answer. .

In the two years that Tera is in the Indies, Marius will come twice to Buitenzorg to spend a few days with her and she will go twice by train to Soerabaja to visit him.

For both Tera and father Wouter it is clear that Marius is a problem. In the summer of 1930 Marius loses his job. Father Wouter writes: God only knows what should become of Marius. It is clear to us that he must remain in the Indies, firstly for his health, furthermore because it will probably be less difficult to find work there than here, where there is an abundance of labor and the turnover is not as great as in the Indies. and finally because without work here he would be a scandal to his family. May he soon find work in the Indies, however insignificant it may be, lest he be in danger of moral ruin, and let him be content with a salary to support himself, and not, as in the spring in Batavia make all kinds of demands; we will take care of the maintenance of his family here. You understand how this situation affects us all and leaves us very bitter indeed. It might also disrupt your plan to see something of East Java, which I’d think is a shame; in any case take care that Marius does not call upon you for financial support, as he has so often done with me; the easy way he could get money here has been his misfortune; he has lost all energy to save himself because of this; he must finally learn to take care of himself; we will take care of his wife and children here.

It is out of the question that Tera would lend money to her brother. Tera is quite critical of him in her letters home. She thinks he is not good with money. Tera writes in August 1930: …I have no faith what soever in his money management skills, neither for others nor for himself…

Nevertheless, Tera is willing to support him when she stands warrant for a new position that Marius manages to get. And she stands up for her brother to a certain extent when she writes: The quarrel with his previous boss Van Ingen was not only Marius fault, I am convinced of that, although Marius says of course that it is all on Van Ingen. But Marius can be quite stubborn, as if he has the monopoly on the highest wisdom. It must also have hindered Van Ingen that Marius spent so much time talking with customers in the store, conversation, which of course was not only about the interests of the business. Marius can be compared to a general who looked so bad because he had never learned to be a soldier. In this new job (in which he gets f300,- a month) he is at least more his own lord and master except that he is accountable to the church board. I once let him know that I did not have much faith in his financial policy.

In addition to his financial situation, father and daughter are concerned about his “moral decay”. He lives in Soerabaya in a pavilion and is acquainted with a divorced woman. When Tera stays in Soerabaya in the summer of 1930, she is not happy about the household of  this woman: The servants do exactly as they please, she has a flail of a houseboy for example, and the children are also left much to themselves. That son, Rob, whom Marius is so enthusiastic about, seems like a nice boy, but in my opinion he needs some serious slaps around his ears. He has a vocabulary that would make a marine blush, and he can’t obey at all. It’s pathetic. The girl is much nicer and I believe more intelligent too. Marius visits them  a lot.

Tera does find it difficult to confess this to her father: (…) I thought for a long time whether I should write to you about this, because it seems like snitching, but I still believe it is better if you know, also because I fear that Marius in his letters sometimes looks at things too much with his own eyes. I also don’t like having to experience this from my “big brother” whom I kind of looked up to as a child.

Father Wouter is pleased with the information, but his concerns about his son, of whom he still doesn’t think very highly, do not diminish: Marius is full of praise for her in his letters, sometimes too much for me. This does no harm to ordinary people, but Marius is unbalanced and runs the risk of being taken in by someone, a woman, who shows him compassion, especially by this woman, who herself has also experienced much suffering; she, after all, is the divorced wife of the communist teacher Baars, who was exiled from the Indies. In my opinion there is some danger in this. (…) I have warned him against the danger that he will walk through his unsavory clothes in order to annoy others, as he has so often done here. I am so afraid that Marius will ruin his reputation in Soerabaya, just as he has done here. And what will become of him then?

Father Wouter is therefore regularly concerned about his son. He also feels responsible for Marius’ family in Holland and he has a very good relationship with Marius’ wife Ans. He does want information about his son and writes: Therefore, if you know something to the detriment of Marius, please report this to me on a separate sheet, if e.g. Marius’ friendship for someone should seem dangerous to you, that way I can judge whether or not I shall communicate it to Ans. But above all, do not abandon Marius, help him with our morale support, as he loves you very much, otherwise I fear that he will perish.

(Hut of the Botanic Garden on the Gedeh, in the doorway Tera, photo made by Marius)

In the summer of 1931 Marius comes to Buitenzorg on holiday. Tera puts him up with Lieftinck’s because she doesn’t have a spare room of her own. 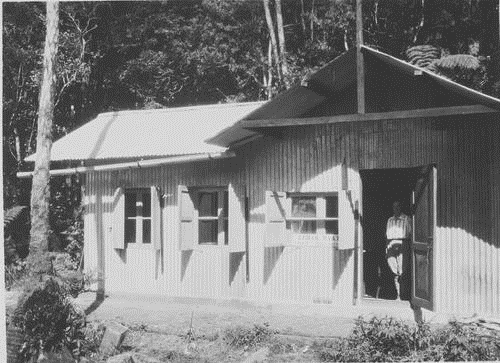 Together with a few koelies they set out to Tjibodas to climb the Gedeh: I went to the Gedeh and its surroundings with Marius on Tuesday, Wednesday and Thursday. We had beautiful weather, especially on the Gedeh a very nice view. He is however not a good climber, he was completely bushed after the Gedeh climb (rather an easy climb in my opinion). So that I hopped up and down the Pangerango on my own the next day. I don’t know if I’ll ever come back and I didn’t want to miss the last chance.

By that time Marius has apparently also entered into more calm surroundings and father is  a bit more gentle with his son: Marius is amazed at your climbing skills and your stamina and envies you for them, now I am at peace with it, provided you do not ask too much of your powers which would ruin them as a result.  It is certainly an achievement, after climbing the Gedeh, to hop to the top of the Pangerango the next day, accompanied only by a koelie. Fortunately you had beautiful weather, so the views were very beautiful. Marius apparently enjoyed his leave with you very much; it was full of variety; he is especially delighted with the Poentjak Pass, Tjibodas and the waterfalls of Tjibeureum; you did a good thing with Lieftinck by receiving him so hospitably, which he deserves in these circumstances.

We will meet Marius again later, after all he remains her brother. But first Tera will move house again next time.