Two weeks ago we saw that Tera moved into a little house on the Kotta Paris. However, the stay in her house on the Kotta Paris is short-lived. The teacher recovers quickly in the mountains and at the end of March 1931, after just two months, she wants her house back. So Tera has to find a new home again. She finds this in the pavilion of the Catholic family van der Meulen. Tera doesn’t like Catholics: I’ve rented the pavilion at 25 Pabaton and I’m moving into it April 8. The Van der Meulen family seems very suitable to me (i.e. I have not yet seen the man, who works in Batavia, and only comes home late) only fiercely Roman Catholic. That’s something for an anti-papist like me. As long as they keep their Jesus-in-all-sizes out of the pavilion now, it’s all right with me. It consists of two rooms and a front porch, but no private bathroom, unfortunately. It is nicely furnished and I have to pay 75 per month. I believe that this is not too much, and in any case I do not have the hassle of renting furniture or buying it from a vendu. It has its own electricity meter.

Her father doesn’t hide his anti-Catholic attitude either: Be more careful, however, that you don’t show your anti-Catholic attitude towards the van der Meulen family, who may have been raised Catholic from parent to parent and therefore don’t know any better. The conviction must be respected in such people, but not in their clergy, who, in so far as they are scientifically trained, are filthy impostors that want to get and hold on to power.

This kind of  anti papism was very common at the time. The equality of Catholics was arranged on paper with the Dutch Constitution of 1848. The Nederlandse Onderwijzers Bond (Dutch Teachers’ Association) had protested vehemently against this new constitution and the freedom of education regulated therein with the sentence: “that according to this article the greatest scoundrel, even a Jesuit, should be allowed to teach”. The same constitution also maintained the ban on (Catholic) processions, which was introduced in the Netherlands after the Reformation. Hence the Stille Omgang of Amsterdam, where people walk through Amsterdam without any religious expression to imitate the sacramental procession in honor of the miracle of the wafer from 1345. This ban on procession was finally removed from the constitution in 1983.

It was not until 1880 that a Catholic entered parliament and it would take until 1904 before a Catholic political party would be established. Until after the Second World War, it was wise to be a Protestant in order to obtain a high official or military position. The protestants protests against the Catholics argument was actually similar to the current nonsensical argument of some populists. Catholics would not be patriotic enough because they accepted the Pope as the supreme authority and thus have a dual loyalty. Similar to some migrants who have two passports. 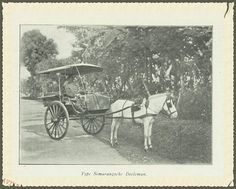 Tera moves on April 8, 1931 with a deleman (see photo). It is an excellent pavilion and Tera arranges that she is completely self-sufficient: I continue to take care of my own breakfast and dinner and eat either in the hotel or the take away that I already use, so I don’t have much to do with the van der Meulen family.

I noticed that the use of the family crockery gave some difficulties and Madame made a little objection to allow me to use more than absolutely necessary. Which would be annoying, especially if Bet and/or Lieftinck etc. come to eat. So I have now bought myself a breakfast set, teacups and some glasses, so that I am completely independent, which can also not cause any trouble with the servants. I think it’s for the best, at least I’m very happy with it.

To Tera’s own surprise, she gets along very well with the van der Meulen family and especially with their four children. And she writes: The Van der Meulen children do indeed look quite pale  like many children over here, the youngest Attie, is the sturdiest, a nice little man. The girl is such a sweet child, she always comes to tell me something or show me something, sometimes brings flowers. It was she who came to tell me this week: “Father has been raised and no longer needs to go to Batavia”. He has been promoted and has now been placed in Buitenzorg again, which gives the family a lot of peace of mind, now that he no longer has to be on the train at a quarter past six.

Tera loves all children she meets anyway. She follows closely all the ups and downs of little Carolien Boedijn and Kareltje Dammerman. She does handicraft with the children, she goes swimming with them and she teaches them the rudiments of biology as she goes looking for insects and plants with them. The children are more lively than ever, this week I grumbled that they already made a spectacle at half past four instead of keeping quiet until half past five. Perhaps her educational background makes her extra sensitive to children. Father acknowledges her feelings for children when he writes: It’s great that the children of v/d Meulen are so attached to you! You have always loved children very much and this makes it easy to deal with them, making them a welcome change in your work.

Tera maintains all kinds of contacts in the Indies, she is invited to every birthday and children’s party and she always goes. But Tera wouldn’t be Tera if she didn’t express  her explicit opinion about such parties: Sunday I went to a children’s party in honor of Kareltje Dammerman, who celebrated his birthday. There were 20 children and all kinds of games and competitions were played, quite a hassle for the parents. But since father Dammerman is simply crazy about this child, nothing is too good and he goes out of his way. The presents were so exaggerated, a table full as if on a Sinterklaas evening in a very large family. And that when you only turn 8!

She also maintains contact with adults. Like with distant and less distant cousins ​​who are in the Indies to whom she sends flowers or some fruit on birthdays. She also goes several times to Bandung (about two hundred kilometers from Buitenzorg) to visit her friend Toxopeus. Lambertus Toxopeus (1894-1951) also knows Tera from the biological world. Tox, as everyone calls him, works as a biology teacher at the HBS in Bandung, he has a wife and three small children.

One day Tox and I went to Radja Mandal, a rubber company near Padalarang. Nearby, the Tjitarum makes a lot of rapids and a small stream  branches off, which disappears into a cave. The landscape is very beautiful and there were also quite a few snails. 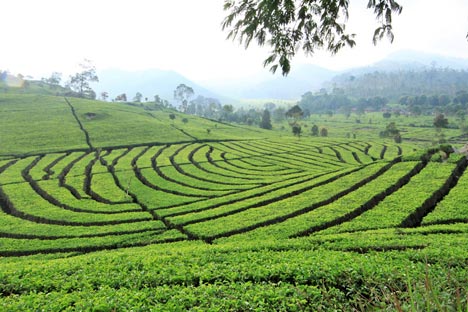 We also made an excursion with van der Pijl (Biology teacher in Bandung and ex-Amsterdammer) to the Goenoeng Wayang south of the Malabar. This was an amazingly interesting journey. First by car via Pengalengan to the kina company Kertamanah and from here on foot through kina gardens and later through primeval forest to the crater of the Wayang.

We will come across Tox again in a next blog. Next time we will see how Tera and Maus get along better and better.