Maus (Maurits) Lieftinck’s name has already been mentioned regularly in previous blogs. Maus is one of the colleagues who picks her up in Priok when she arrives in Batavia and Maus is the one she shares a room at the museum with. In 1923, Tera worked with Maus Lieftinck on mapping the Naardermeer. Maus is mainly interested in entomology (insect science) and will later become a specialist in, in particular, the field of dragonflies. In August 1929 he left for the Indies, partly because the jobs for zoologists in the Netherlands were not up for grabs.

At the beginning of Tera’s stay he shows her around the museum and he is usually there when they go out on the weekend. For example on July 7, 1930: Last Sunday we went with van Steenis (Kees), Karel (Boedijn), Verdoorn (biologist from Utrecht, who works here temporarily), Maus and I to Tjisaroea, the same company, where we went once before. Almost no patjets (cockroaches) showed up now, it’s the dry season! We’ve walked the stream a long way, upstream, and collected the most beautiful things. There were hardly any snails, the current is much too strong, but there were all kinds of interesting insect larvae. I always have the greatest admiration for Maus, who usually knows how to name these wonderful beasts at once. 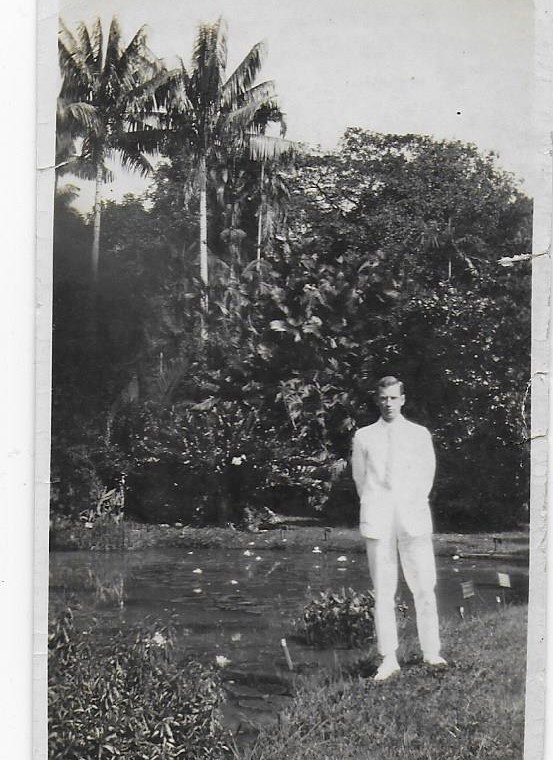 Here a picture of Maus in the botanic garden.

They are both single, and occasionally need a partner to go to receptions and dinners. They go to the cinema and concerts together, often with others, but also as a couple. Maus is also someone to talk to and walk with. The rainy season has been quite merciful so far. Last night, for example, it was so beautiful that I went for a long walk with Maus. It’s funny how everyone takes advantage of it and is on the road.

When Tera lives in the house on the Kotta Paris, Maus lives 6 houses away from her. The first evening he comes to her for dinner to inaugurate the house. They like it so much that they eat together very regularly for the next two months, because cooking for two is simply easier than for one. Food doesn’t last long either, there are no refrigerators, so fresh meat has to be used up quickly. Moreover, a bond develops between Tera and Maus that transcends the collegiate. In the museum too, her help goes further than for just any colleague: And in the museum I help Lieftinck to collect his junk for a 14-day trip to the Karimon Djawa islands, where he will leave the following week. He goes with three mantris and an Indo-preparator and has to arrange and prepare everything, food, kitchenware, clothes, obat, ammunition, etc. There is a lot more involved here than in Europe!

When Maus gets dysentery, Tera takes care of him: Lieftinck is struggling with dysentery and looks rather green and very thin. I now cook rice every day, but there is so little nutrition in it if you can eat no fat and no protein. Now, if he doesn’t stick to his diet faithfully, I threaten him to have Mrs. Dammerman take care of him. For that is the image of terror, because she makes such a fuss over you and there you are so mothered and coddled, that you would get even more sick from the experience!

Maus and Tera are clearly a match , they respect each other, joke together and regularly go out together, sometimes accompanied by other friends. They are of the same generation, Tera is just under five years older and they share each other’s interest in biology. They come from a similar background.

When Tera moves to the pavilion of the van der Meulens, contact with Maus remains intensive: We have already exchanged the hotel for the living room for lunch again, which was a pleasant improvement. The food at Bellevue was good, but I find it so uncomfortable to be the only guests in that long dining room, and djongos everywhere, hanging on one leg and giggling. And everything you drank with it, djeroek, or coffee or vermouth, you had to pay very dearly. Then Mrs. Suturius, (a kind of takeaway restaurant) where 1 portion is more than enough for both of us, also much cheaper.

The longer Tera is in the Indies, the more she hangs out with Maus. In conflicts with her boss, she invariably takes Lieftinck’s side: I went to Bandung on Thursday, September 24, attended a few meetings in the afternoon and in the evenings I was in the club with the Toxen and Maus, where all the congress participants talked or danced. It was very pleasant there, I found troops of old acquaintances and it got very late. The next morning poor Maus had to go home, for Dammerman was afraid the dead beasts would run away when all three of us were off. (Then Beaufort is quite a bit more lenient, he would never have ordered such a thing.).

On December 8, Tera and Maus board a plane to Bandung together. Flying is still in its infancy, but Tera is not afraid, after all, she has flown before

Yesterday Dec. was it Mohammed ascension and so we had the day off. Then Maus and I took the plunge and flew to Bandung. It was an old plan, but it had failed sofar, also because the KNILM doesn’t fly on Sundays… The flight itself was very beautiful, I was happy to sit in such a machine again after 10 years . First we saw one in Tjibilitan leaving for Singapore, then one to Surabaya, and then we went ourselves, with 5 passengers in an airplane for 8. First over the plain, completely divided into squares of sawas and later over the mountains following the railway Batavia Poerwakarta Bandung next. There is a stretch of limestone mountains there, which peaks up with strangely steep peaks. We also saw nice lime-burning factories, the Pandalarang paper factory and a few tea companies from the air and on the side the Gedeh and the Boerangrang and Tangkoeban Prahoe. The plain of Bandung was full of small clouds of fluff, like the first scattered snowflakes on a street. Caro Toxopeus picked us up with 2 children in Andir, the children thought such a giant dragonfly was stunningly beautiful. In the afternoon we went back by train at half past three.

Somewhere, Tera hints that she’s having difficult conversations with Maus while out for a walk. It is not clear what they are about. Perhaps Maus does propose to her. If so, it’s unclear why she didn’t accept. Tera may not want to give up her career. Married women were not supposed to work, as a civil servant she would definitely have been fired. It is also possible that Tera wants to go home and Maus wants to stay in the Indies.

The possible refusal to marry does not prevent them from continuing to hang out together: On December 31, 1931, they celebrate the New Year’s Eve together: Lieftinck and I first went to the cinema and then we spent the time pleasantly with me. Ate a sort of hors d’oeuvre and drank May wine, nice in December. I had asked Bet to come too, but she declined. And relatives were staying with the Boedijns, so we weren’t asked there. 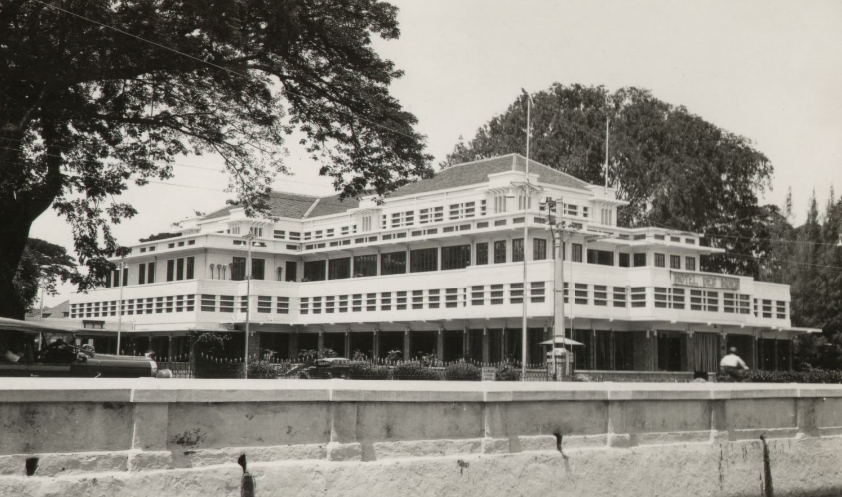 On Sunday, January 17, 1932, they go to Batavia for a day, first to the museum on Koningsplein and then to have a rice table in Des Indes (photo above): This is a famous ceremony. You are hardly seated when a long procession of djongos arrives solemnly like a long ribbon, shuffling along, one after the other, a regal sight. The first with rice, the 2nd and 3rd with sajoran and the next with mata sapi, duck eggs, shrimps in various shapes, frikadel, sambelan, fish, noodles, grated coconut, katjang, satay ajam in at least 3 shapes and God knows what else. I thoroughly enjoyed the whole show and all the delicacies.

In 1933 Maus married Mia Coenen, dentist in Buitenzorg. Maus is certainly not against working women, Mia’s dental practice remains open. Maus and his wife will end up in a Japanese camp during the war and will survive that. In 1954 Maus finally returned to the Netherlands, where he became director of the Museum of Natural History in Leiden. It’s not clear if Tera kept in touch with Maus.

In the next few blogs we will meet Maus again.