In the previous blog we saw “normal” life getting more and more difficult as the war continues. In this blog we meet a new friend of Tera. 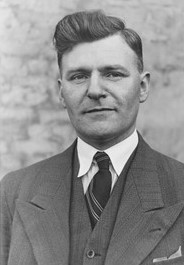 In the early months of 1944, the name Piet Meertens appears in Tera’s letters. Meertens is also from Zeeland, interested in the Dutch language and dialect and active in the resistance. Pieter Jacobus (Piet) Meertens (1899–1985) is a Dutch scientist, dialectologist and folklorist. In 1934, the Royal Netherlands Academy of Arts and Sciences (KNAW) took the initiative for a Folklore Committee with Piet Meertens as secretary.

That is the basis for the later Bureau for Dialectology, Folklore and Onomastics, of which he was director from 1948 until his retirement in 1965. In 1979 the office is renamed the Meertens Institute. Piet Meertens has been immortalized as A.P. (Anton) Beerta in the novel cycle “Het Bureau” (the Office) by one of his staff members  J.J. Voskuil.

Tera writes: Last week I made an extensive visit to Meertens. Are you familiar with his dissertation on literary life in Zeeland in the 16th and early 17th centuries? Huge amount of interesting data.

Meertens received his doctorate in 1943. Their shared interest in Zeeland and probably their loneliness draws Tera and Piet to each other and makes them to spend a lot of time together in 1944. Pico watches it from a distance with sorrow and writes condescendingly about him. Tera reacts somewhat annoyed: I know that Meerten’s intelligence does not match yours. So I can imagine that you find his writings mediocre. But I’m quite happy with it and I’m learning a lot from it. On Sunday he was here for coffee and spent the afternoon snooping in the Jutting family archive……

And later: Wednesday Meertens was here to interview my Zeeland friend Krien (Hocke Hoogendoorn) about her family. I have quietly listened to them from a corner with great amusement. … M. has greatly enjoyed all those stories from the mouth of someone, who is still very much in contact with her ancestral roots. He’s a good fellow, Pico, and always very nice to Tera, but you don’t have to be jealous.

In May 1944 Tera plans to make a trip to Zeeland together with Piet. There is a lot of dubbing and hesitation. There are constant rumors of invasions and bombings. D-Day is of course not far, but that Tera doesn’t know. The Allies could also land in Vlissingen, or in Zandvoort. Piet decides to go anyway. Tera decides to stay in Amsterdam.

So I have now decided not to go to Middelburg on Tuesday after all. The situation is getting worse every day, although it can go on like this for months. I know that de Beaufort relies on me when something happens (Engel is not much use in time of need); I control the staff and the museum, and although I can’t protect them from bombs either, I can try to guide them through the dangers of internal panic and upheaval. And I would think it a miserable thought if I heard in Middelburg that Amsterdam was bombed and I couldn’t be there.

I don’t know what Piet will do. He will probably go, unless a travel ban or a ban on admission to Zeeland is issued. I hope he makes it out alive.

You will understand that this decision makes me very sad. I would have gone so dearly: a kind of pilgrimage, before my death!, to the good years and places of the past. I would have felt the emptiness of your absence there, but then I still would have had the idea that I could also work something for you.

But Tera can also be impulsive and that same evening, June 10, 1944, she sends Pico a postcard:

I’m about to get on the train for Middelburg. Do you mind? I couldn’t be content with it, I constantly had the feeling that I was deliberately throwing away something beautiful. Although everyone said that they thought it wise that I should give up the travel plans. I thought in my heart: if only you knew how it hurts me not to go. De Beaufort is well again and plans to come regularly.

Just pray that everything turns out well. Isn’t this a striking example of Blut und Boden theory?

With much love from T.

She stays in Zeeland for more than two weeks, visits the museum, talks with Brakman. She goes to Domburg to see how Pico’ villa is standing. She visits her family and tells Pico all about it in detail. During the day we each went our own way; I mostly go to museum and library, P. to archive, secretary, library and various people in the city. We only saw each other at meals, and sometimes in the evenings. He has been very cordial and kind to T., with 1000 small attentions. You shouldn’t be mad that we sometimes gave each other a dear kiss. P. was afraid that I would become too attached to him, and therefore I told him about my dear relation to you. That’s completely safe with him and I’m happy now that I have someone close to me who understands something about my life and about my longing for you. I hope you can get along with him later. Write me honestly, if you think I’ve done wrong.

Piet is very religious and takes Tera to church on Sunday: I would have liked to have gone to a church in a small village, Arnemuiden, or Koukerke that Sunday in Zeeland, but Piet thought it was too far and did not feel like cycling against the wind. So we went to the Oostkerk (Rev. van Woerden). Several of my uncles, aunts and cousins ​​were baptized there in the old days. I really liked the sermon. Text Ezekiel 37 vs. 1-10. I must have processed it differently than Piet, who is fairly orthodox. To me this story was like a symbol of how a scientific man or an artist can create an organic whole with seemingly disjointed details by putting his mind into it; the mind which he has received from God Almighty. The sermon continued on the 4 phases that salvation goes through: the preaching of salvation, receiving salvation and accepting salvation (I forgot one phase). 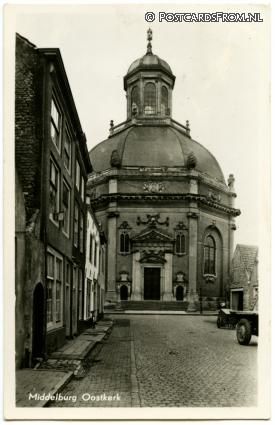 Zeeland is of course somewhat provincial. When a well-known Zeeuw comes there on holiday with a Zeeland lady and cycles all over Walcheren with her, it gives fruit for gossip. This gossip reaches Pico and he inquires about it with concern. Tera writes, when she is safely back in Amsterdam: Dear dear Pico(..) Thanks for all the good and sweet thoughts, especially for not despising me. Not everyone would think that way! (..) In Middelburg no funny faces were drawn about us, at least not in front of us. Since we always went our own way during the day and often also in the evenings, except for a joint visit to Pieters and a walk over the strongholds, we did not give any reason for gossip. We only made the trip to Domburg and Oostkapelle together. Rika, who was in Zeeland after us, must have invented all sorts of things and gossiped endlessly about us .

Tera manages to make it sufficiently clear to Pico that he has nothing to fear from Piet Meertens. His jealousy leaves him. After the war, Piet and Pico will meet. Piet is best man at their wedding and remains a good friend of Pico and Tera. We will definitely meet him again. Next week we will see how Tera survives the last winter of the war.